In a few months, 12-year-old Benyamin Ahmed, who created a collection of digital artwork, has amassed £750,000 (or $988,740) in cryptocurrency fortune. Ahmed’s NFT project is now worth $3.9 million, thanks to the meteoric increase in the NFT market and Ether (ETH).

Ahmed, from North London, began selling his photos of pixelated whales as non-fungible tokens (NFTs) last year as he learned to code while in reception. Ahmed was already something of a whizkid, teaching himself to code at the age of 5. 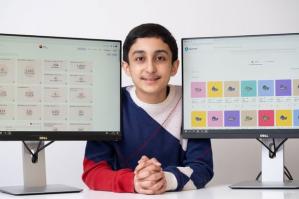 The collection of 3,350 pixelated whale NFTs created by Benyamin was originally sold for $60 each, but demand surged, and so did the price – with some of the set selling for as much as $20,000. The initial sale of colored pixelated whales reportedly brought him £110,000 ($144,978), which has grown to £750,000 as he also traded other crypto arts. The bulk of it is held in Ether. He receives a cut – similar to royalties – every time the coins are re-sold, as well as income from trading other people’s NFT and an increase in the value of Ethereum.

Ahmed’s success has come from selling his whale art as NFTs. Each one of Ahmed’s digital creations is unique and can only be owned by one person. The NFT collection is reportedly worth $3.9 million.

The young boy shows no signs of slowing down, with big plans to use his newfound wealth to help others. The youngster added that he has “a lot of energy” for the crypto and NFT sector, where his interest has now earned him a decent crypto fortune. Ahmed said that many people would not understand NFT, but he has come out to make people explore NFT because of his success and would like to introduce more people to NFTs.

The success of Ahmed’s venture into the world of NFTs is a sign that this exciting new technology is starting to gain mainstream acceptance. NFTs are digital assets that exist on a blockchain and can be used to represent anything from virtual assets to real-world goods. They offer a secure and transparent way to trade and store value, and many believe that they could revolutionize how we interact with the digital world.

The popularity of NFTs is growing rapidly, with more and more people seeing the potential they offer. In the past months, many popular companies, including celebrities, especially from the sports and music industry, showed interest in the market, with many collaborating with crypto firms to exclusively release an NFT.