Popular crypto tracker Whale Alert shows that in the past two days, a whopping 390 million XRP have been moved by Ripple and several anonymous users.

In the meantime, Ripple-affiliated XRP shows a rise of roughly ten percent.

The above mentioned crypto tracking service has spotted several massive XRP transactions over the past 24+ hours. Two of them were conducted by Ripple fintech giant.

Detailed look at the data provided by the XRP-focused Bithomp analytics service says that the crypto behemoth transferred 50 million XRP ($34,906,740) to one of its wallets – RL18-VN. This wallet is often used for transferring XRP beyond Ripple – to digital exchanges, crypto custody service providers and Ripple customers.

Later on, 20 million XRP were sent from that wallet to the Coins.ph crypto trading venue in the Philippines. This exchange operates as an On-Demand Liquidity (ODL) corridor. Similar corridors are active in several other countries – Mexico (Bitso), Europe (Bitstamp), Australia (BTC Markets), etc. 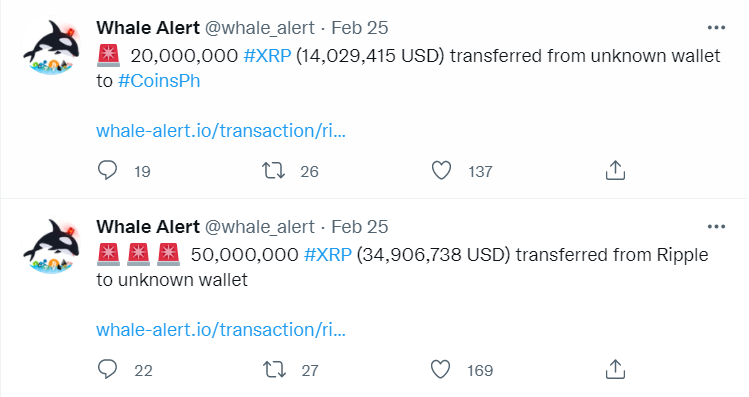