Ethereum could be on the verge of a significant correction after gaining more than 400 points in market value over the past week. Still, on-chain data shows that ETH is sitting on a stable support level.

Ethereum appears to be trading in overbought territory, which could result in a significant spike in profit-taking.

The number two cryptocurrency has surged by nearly 40% over the past week. It rallied from a low of $1,180 on July 15 to hit a high of $1,650 today. However, ETH’s bullish price action appears to be weakening as the technical shows signs of exhaustion.

The Tom DeMark (TD) Sequential indicator has presented a sell signal on Ethereum’s daily chart. The bearish formation developed as a green nine candlestick. Increasing selling pressure could validate the pessimistic outlook and lead to a one to four daily candlestick correction. 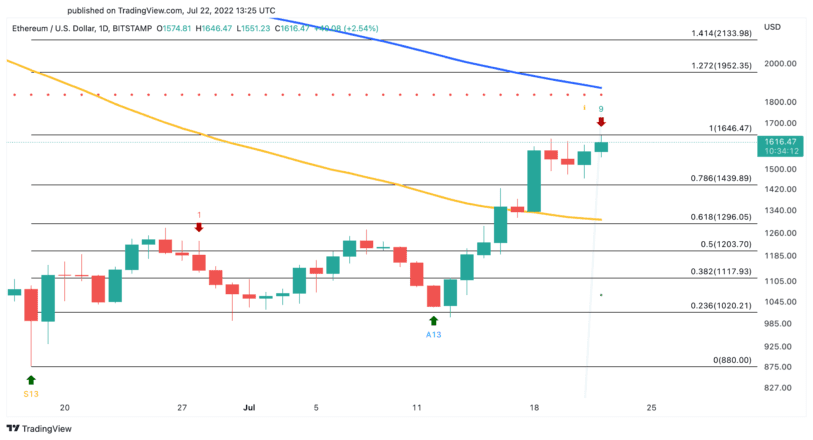 Transaction history shows that Ethereum has formed a significant demand wall at $1,550. More than 586,000 addresses had previously purchased nearly 5.1 million ETH around this price level. Therefore, the bearish thesis could be validated if investors booked profits, potentially sending ETH below the $1,550 support barrier.

Failing to hold above this vital demand zone could trigger a 15% correction toward the 50-day moving average at around $1,300.

Ethereum’s In/Out of the Money Around Price (Source: IntoTheBlock)

Ethereum will likely need to print a decisive close above $1,650 to potentially invalidate the bearish thesis. Slicing through this resistance level could help prices surge toward the next significant hurdle at $1,800, where 1.14 million addresses are currently holding over 800,000 ETH.

Disclosure: At the time of writing, the author of this feature owned BTC and ETH

XRP price shows a massive influx of active wallets, should Investors be concerned?

Bitcoin Price Tops Near $25K, Why Dips Might Be Limited