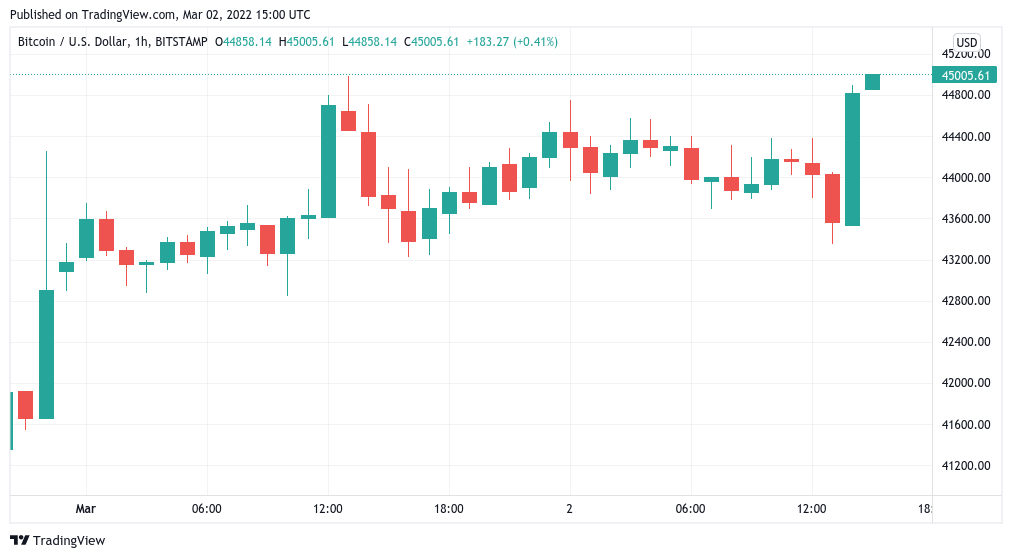 Data from Cointelegraph Markets Pro and TradingView showed BTC/USD dipping to $43,350 on Bitstamp before the Wall Street open Wednesday.

A recovery ensued as trading began, however, with the pair already back above $45,000 at the time of writing.

The volatility followed the release of a new statement from Fed Chair Jerome Powell, who for the first time gave concrete notice of a key rate hike coming this month.

“Our monetary policy has been adapting to the evolving economic environment, and it will continue to do so,” he commented.

“We have phased out our net asset purchases. With inflation well above 2 percent and a strong labor market, we expect it will be appropriate to raise the target range for the federal funds rate at our meeting later this month.”

Long priced in by the markets, questions nonetheless remained as to the extent of the hike, and how many could follow in 2022. The Russia-Ukraine conflict, Powell added, threatened “highly uncertain” consequences for the U.S. economy.

Bitcoin nonetheless shook off any nervousness over the news, climbing to near local highs just under $45,000.

For trader and analyst Rekt Capital, there was cause for optimism, as in terms of order books, BTC/USD was now in something of a “gap” which could trigger a run towards $48,000 — the next area of sell-side resistance.

Of interest, too, was whether the 50-day exponential moving average (EMA) could be flipped to support.

#BTC continues to hover below the blue 50-week EMA

Breaks beyond this EMA have preceded immense upside

“A scenario could be that we’re going upwards again on Bitcoin to trap the shorts, take the liquidity and go back down towards $42K,” Cointelegraph contributor Michaël van de Poppe continued in a separate forecast on the day.

“Next to that, we also have a massive resistance at the $46K region which I doubt we’ll break in one-go.”

Elsewhere, altcoins were stable, with Ether (ETH) looking to retake the $3,000 mark once again.

Terra (LUNA) was the standout in the top ten cryptocurrencies by market cap, continuing a winning streak set to see it reach $100 after its initial rejection at the start of the year.

“It only lost approx. 10-15% in $USD value in the past months, while the entire market has been dropping down heavily. The next wave of the bull phase will probably be led by DeFi.” 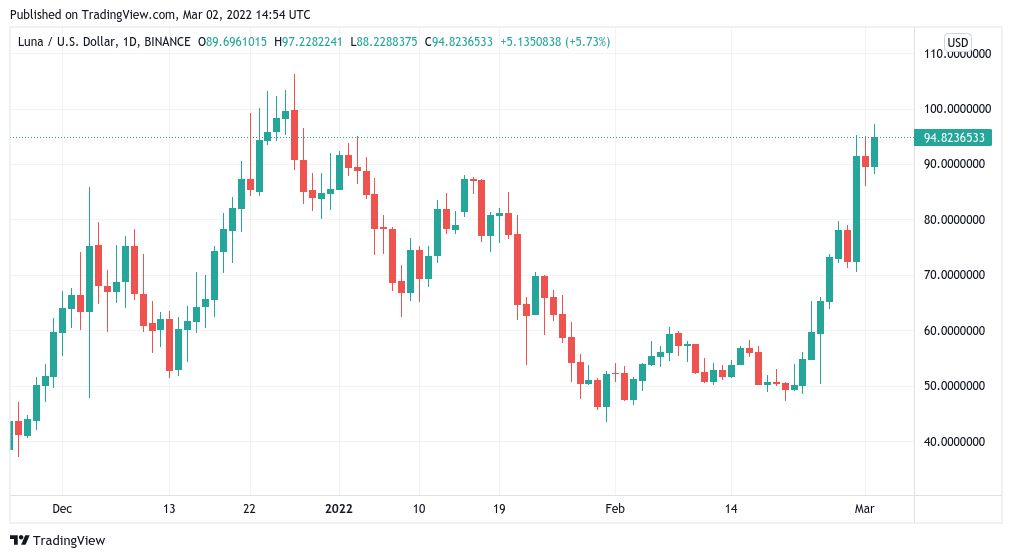