The global crypto market had the toughest time yesterday after the Russian invasion of Ukraine began. It proved hard because of the continuous fall in the value of cryptocurrencies. An evident example was Bitcoin which shed about 7% in less than 5 hours. Investors feared a market crash, but fortunately, the market recovered quickly. The Russian invasion of Ukraine has resulted in a strong reaction from crypto experts like Vitalik Buterin. In response to this unjustifiable act, he said that Ethereum might be neutral, but he isn’t.

As the situation for Ukraine has turned untoward, the Ukrainian ministry of defense is unable to receive donations in cryptocurrencies like bitcoin and others. It shows how the situation has changed and how central crypto has become to our modern world. Though currently there is a problem with the acceptance of crypto, the problem might be solved very soon.

As Russia has turned the tense situation into a war, the hike in prices has resulted. There has been a 2% increase in oil prices over a single day. The reason behind this rise is the uncertainty that the war has created. As Russia is a leading oil producer, there are chances that sanctions from the West will affect it.

Here is a brief overview of the market situation using the performance of the top currencies like Bitcoin, Ethereum, etc.

Bitcoin was reduced in value after the Russian invasion of Ukraine began. The same was true about other cryptocurrencies as well. But now, the situation has begun to improve after Biden’s speech, and there is a positive trend seen in the market regarding bitcoin. On the other side, there has been no reduction in Bitcoin mining on the Russian side, and it continues as usual. Thus, no change in bitcoin mining has kept it afloat. 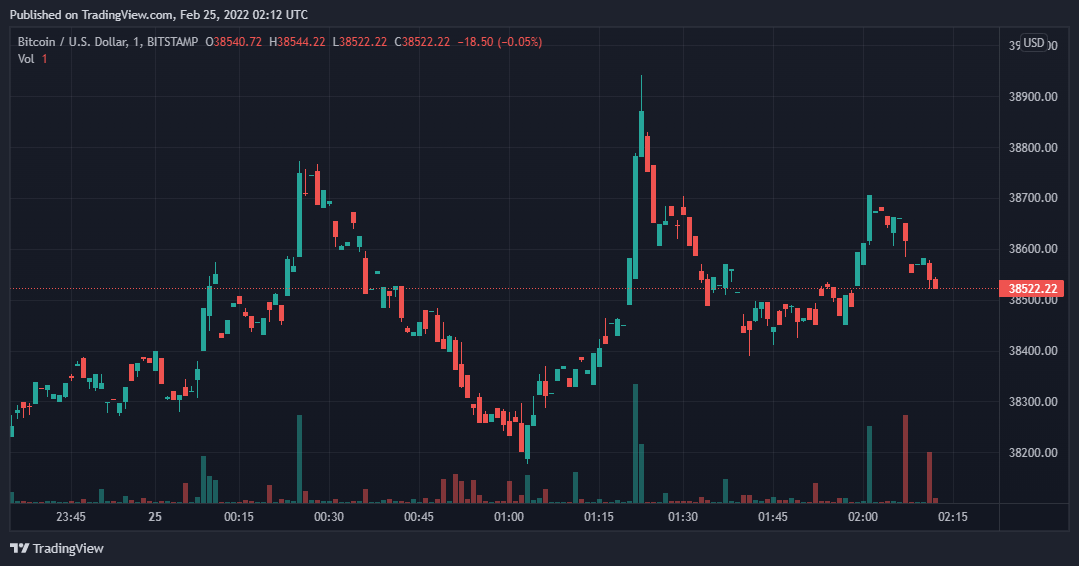 The trading volume of bitcoin for the last 24 hours is estimated to be $46,789,322,832. The graph analysis for bitcoin shows that it has undergone a steep fall and then a sudden recovery on the last day.

Ethereum has also turned bullish, following the bitcoin trend. It has gained 2.46% in the last 24 hours. In contrast, taking a peek at the past seven days’ data has shed 9.71%. The price for Ethereum has also improved after the new gains. It is currently estimated to be $2,631.76.

The graph for Ethereum shows that it has recovered its value amid continuing losses.

ADA is still lingering in the limbo

Though the market has changed its dominant trend, as we see in the case of bitcoin, Cardano hasn’t yet turned bullish. The data for the last 24 hours shows that it has continued to stay bullish. As per the stats for the last 24 hours, it has lost 0.49%. In comparison, the value of weekly losses is far more as it has shed 17.02%.

Dogecoin has been through hard times during the ongoing geopolitical conflict. It has shed about 11.97% over the past seven days. The losses haven’t yet turned to gains as it has shed 2.56% in the last 24 hours. The current price is in the $0.124 range, while its ranking is 12th in the global list.

The current market cap for this coin is estimated to be $16,447,389,457. While the trading volume of $2,075,457,010. Dogecoin has stayed stable over last week compared to other coins, but its losses have accelerated recently.

The market is going through hard times, but it has been able to recover the value that it had shed recently despite the difficulties. The 24-hour data shows that the global market cap has reached $1.72T, which is encouraging. As evidently the political and economic changes in the world affect the market, it has shown perseverance in standing to these changes. If the market performs well during the current crisis, it will revive investor trust.