A physical painting by Takashi Murakami, a well known Japanese artist, has been burned in a ceremony at NFT NYC earlier this month so as to turn it into an NFT.

“Ashes to ashes, this Murakami belongs to the metaverse now,” said Firesale, a startup that organized the ceremony. In elaborating further on OpenSea, they added:

“Fire Sale has proudly transfered the scarcity, value and image of this piece from the physical world to the digital via live auction and burn ritual at Capitale NYC on 11/4/2021.

Archival scan of work unlocked with purchase of this NFT.

Proof of burn will be posted after sale, and the owner will be able to claim additional tokens related to the burn and authenticity of the piece.” 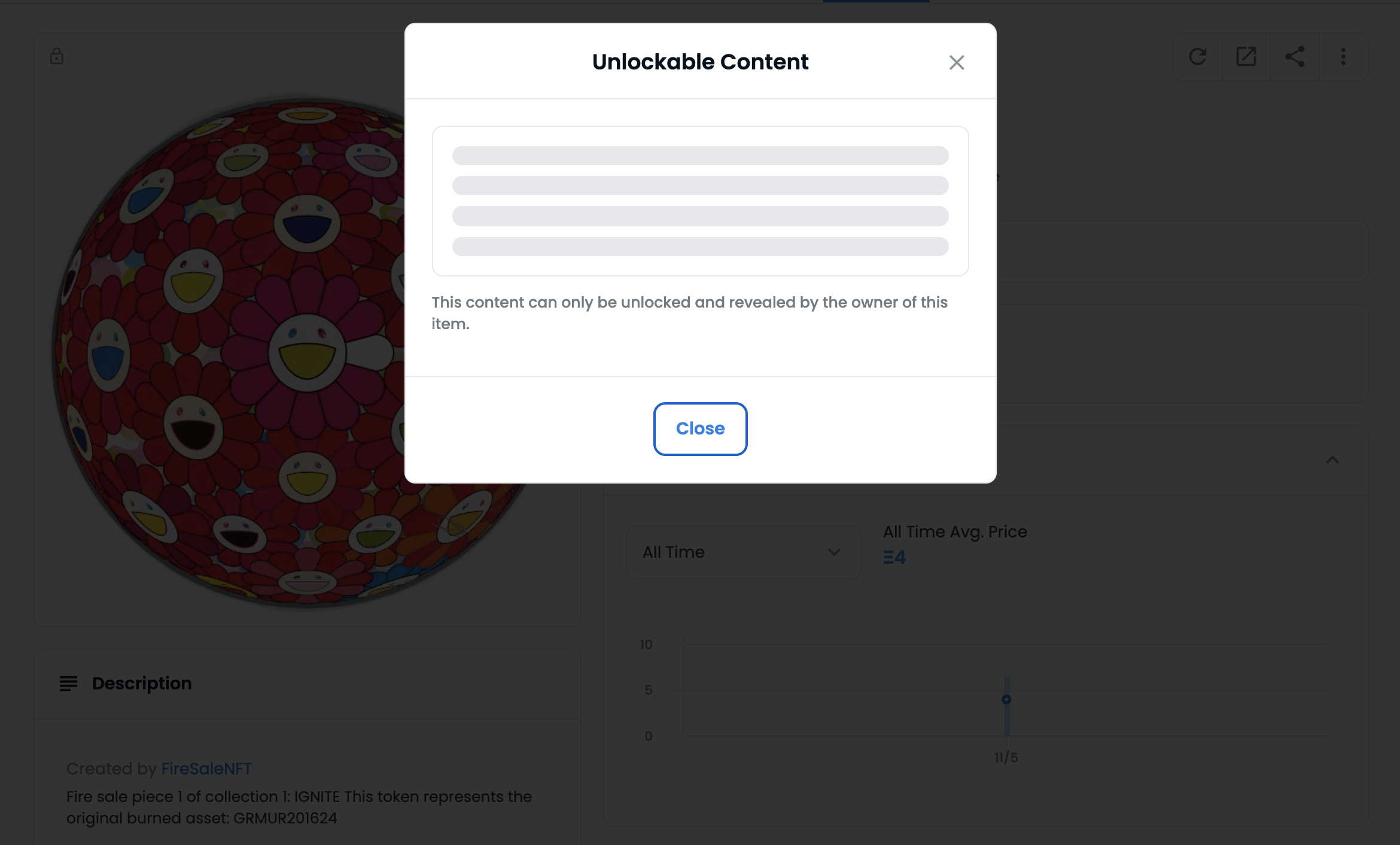 The painting itself isn’t some masterpiece, at least to us, but it is a nice happy collection of flowers byMurakami who began getting involved in NFTs back in March.

“I have been creating NFT Clones with RTFKT Studios, we’re all going to make it (WAGMI),” he said last month.

The painting in question sold for four eth, currently worth $18,600, with the hidden content being the original art picture as well as proof of burn (pictured above).

This hidden part is a bit new to us, although an expected development, as it is the first time we come across an NFT that has non publicly visible elements.

The burning itself is not new. A Banksy was burned back in March when we were all debating just what are these NFTs and do they have any value.

Back then we established after some analysis that they have some value, which can be one cent or even less than one cent but not zero, due to providing proof of originality.

The Mona Lisa from the hand of Leonardo is very valuable first of all because it is so old, and so tells us something about the times that were five centuries ago, and because it’s the unfiltered work of the master himself.

You can print this nowadays, but due to base entropy the copy can’t be quite identical and you can’t be certain that it is an unedited reflection of the original.

Of course you can be there yourself and see. It’s identical, it’s pretty much the same, we can infinitely replicate this thus and so the original doesn’t have value.

But, let us suppose the original vanishes. A baby born today will see images of Mona Lisa until he/she is 20 or 30, but without the original can he or she really be sure in adulthood that this was a work of five centuries ago. Couldn’t all this have completely been manufactured, this time not with Mona Lisa but with chisel and hammer or swastika or even more benign controlling or imposing/enslaving propaganda that claims always was thus and this five centuries art work shows it, with the art work itself unfortunately burned in the Library of Alexandria.

And why does this matter? Well, power fundamentally. Truth is power, it’s manipulation is coercive power, especially at a collective level. An idea, that is objective or beautiful or ‘good,’ is the ultimate power in this world, above standing armies and above trillions of dollars. Paintings can be an idea.

In this case, the ‘idea’ is happy with cheery flowers. You can look at it, you can copy it, but you don’t own it. You don’t have the original, and without the original, why should anyone believe you?

In this case it doesn’t matter, it’s just some flowers. But does ownership in itself make it matter, at least to the owner?

You can copy it, but would you really care about a jpeg? The owner presumably cares, maybe in a meh way, but still probably more than a jpeg.

This caring translates to preservation, and what you are preserving is basically human labor or effort/intellect etc. In theory due to entropy, preserving becomes more difficult with time. What was common becomes rare, and in this matter what is rare can establish what is truth.

We see for example the great artworks of ancient Greece or Rome, and their fine skills, rivaling perhaps even current artistry especially in statues but sometime even fine paintings.

Then we see the child like drawings of the middle ages. Did they really lose the capability to paint itself, or is it just that they didn’t preserve it, in part due to all them wars. Or was an artists class non existent? Then we get to renaissance, and we’re back to skills rivaling the present.

Let us assume this flower is one of the few things that makes it to year 2,700. Will they also say that we can only do childish paintings?

We might not necessarily care, but it’s perhaps not because of caring for such high ideals that someone got this happy thing. They like it, they think it might have value, they want it to feel good or cool, they bought it and now they own it. They’ll keep owning it as long as they have the private key, and they might even give it to their child on their birthday, lock it in a trust fund until 18. Their child might get a smile out of it when he opens the trust, might think nice gesture but rubbish or this is cool I’ll keep it and pass it on to my child.

It’s art, that’s all there is to it, and art has value, perhaps not much, perhaps a lot but good art has non zero value. It’s different if you’re getting just tokens for example, and if you’re also decorating them with something like this flower.

If digital art has value in itself, especially as it is timestamped and so we don’t need to carbon test which translates to relying on experts and often estimates, then does burning the physical give the digital more value?

Is there a difference between a physical art work that becomes digital, and a natively digital art work? Does the former instinctively suggest it is more concrete?

It is perhaps a way of making an artistic statement in itself, conjuring transmutation and creating a spectacle of sort, but in substance they’re arguably two different forms of art that stand or fall on their own because ultimately you’re still buying just a tokenized jpeg and so that’s its value.

This ‘burning’ however, usually metaphorically, is a long tradition in this space with colored coins ‘burning’ bitcoin to ‘gain’ value and backing in this case, while in eth we burn the fees. In the Decentraland metaverse there’s a new project called ASH that burns the NFTs you don’t want and then you get ash tokens. So we’ve gone from do these things have value, to these things now ‘backing’ other things.

It is this sort of innovation or experimentation that probably has some legs, but capturing the moment when we collectively move from no digital scarcity to the establishment of value for digital works, as this happy piece might do, is potentially capturing a moment in history.

That brings us back to if done well, then art obviously has value, and since we can now own digital art, we can also value exchange it.

Give your child an actual jpeg for example, and see how long he keeps it for, presuming it’s not just a nice picture of you two. He might also not keep these happy flowers, but he’d presumably be a lot more hesitant in discarding it.

This meaningfulness by the simple addition of ownership can raise the question of whether it is actually meaningless, and some of the public thinks so.

Yet, an event on the metaverse doesn’t quite feel the same without a pope NFT. Popes give us a reason to go there. Why on earth do we want the pope? Some are just ads.

Because it gives us something to do and we’re getting free stuff. Maybe it’s rubbish, but it’s free. Some are cool. They on the blockchain anyway it’s not like we carrying them around. And they ours. I was here, as some Egyptian scribbles that have come to our time say.

And what did you do while you were here? I contributed to the funding of digital art in an attempt to ignite a new renaissance and golden age to set the course of history towards liberalism, peace and beauty so as to win over the authoritarian tendencies that dominate in some corners, and so as to hold power to account through our strongest weapon: art.

At the end of the day, nothing quite has value. The bread come free from the ground. Water is plentiful. Light gives us electricity. These words were just created from metaphorically nothing.

Money is just a system of coordination. In this case, adding beauty to the world, or meaning, or something to do. As such we all feel instinctively that an NFT is not quite just a jpeg, it’s a bit more. And we all don’t quite know what more it will be, but we all feel we’ve opened a door.

The art world is not quite the same anymore is it? It will never be the same because art is now on our screens, not in stuffy museums. It’s back to the judgment of the public, rather than in ivory tower committees. It is back, full stop, after for a decade or two or maybe more, it kind of disapeared.

And we’ll patron it, because why not. There’s money to be made potentially. Fools, greater fools, and the wise ones. A mess, and yet beautiful. It’s how you elevate man, and of course some want to do just that.

On a final word, the real proof of burn here is not the painting, but thatMurakami is doing it. He, along with other established artists, have given their skills to this new frontier, and ultimately it is they that give value to these NFTs as the form is far less relevant than the substance.