A popular analyst is digging into the charts to update his price targets for a handful of leading crypto assets.

Michaël van de Poppe first tells his 622,600 Twitter followers that he’s keeping a close eye on support levels for scalability and interoperability ecosystem Cosmos (ATOM), which recently gave up gains from the latest leg of an extended rally dating back to mid-June.

“At massive levels of support here, which is reasonable for long entries.

Holding here = potential trigger towards $18-20 in the coming month.” 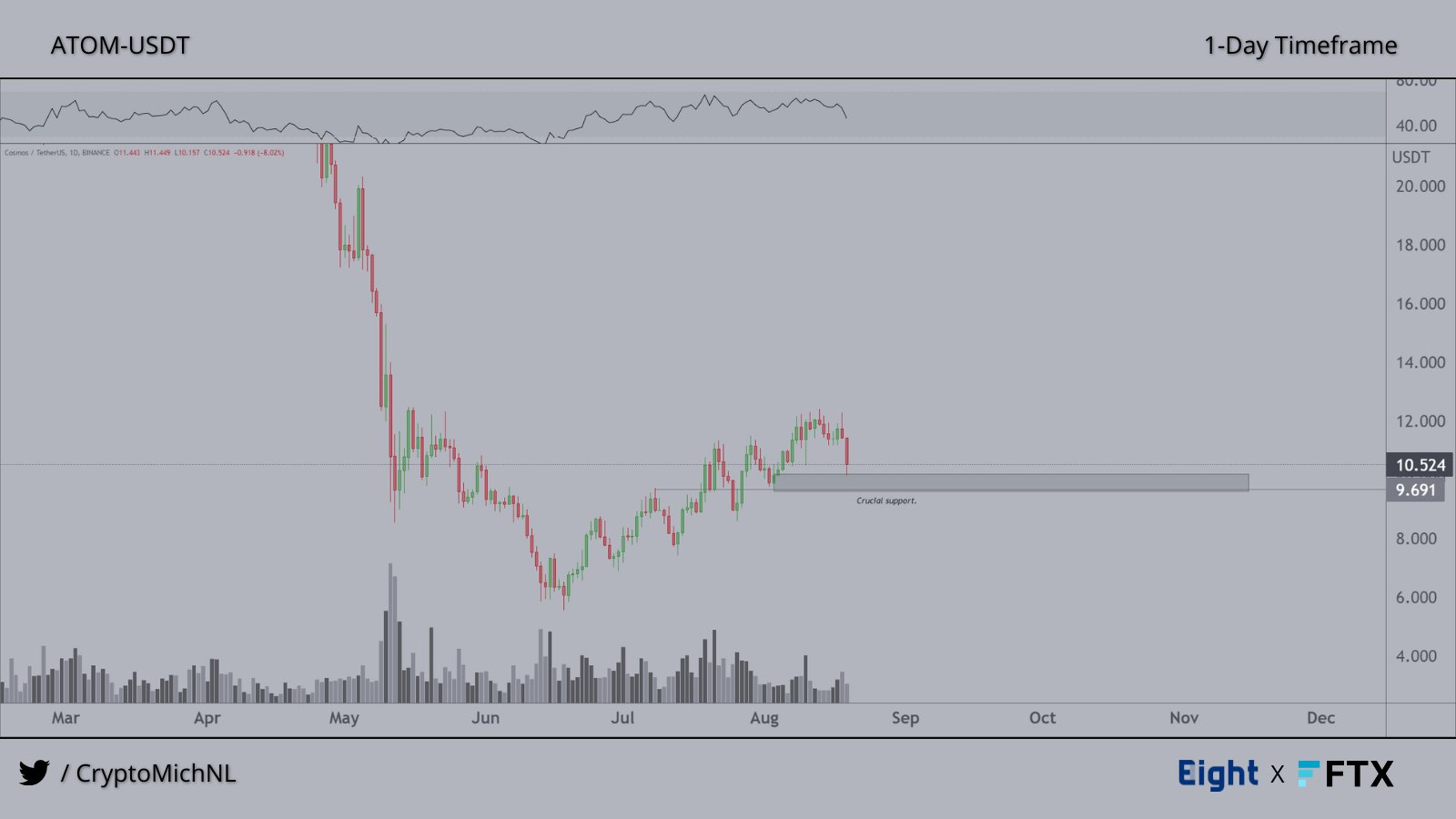 Moving on to crypto lending and borrowing protocol Aave (AAVE), the crypto strategist says that in light of the recent marketwide corrective, he sees the altcoin as a candidate for range trading with support at $80 and resistance at $103.

“This one is trending down as the entire market is correcting.

Fake-out above resistance and drop beneath $103 caused an acceleration of the correction.

Looking at $80-82 for support. Looking at $103 for crucial resistance. Range-bound plays.” 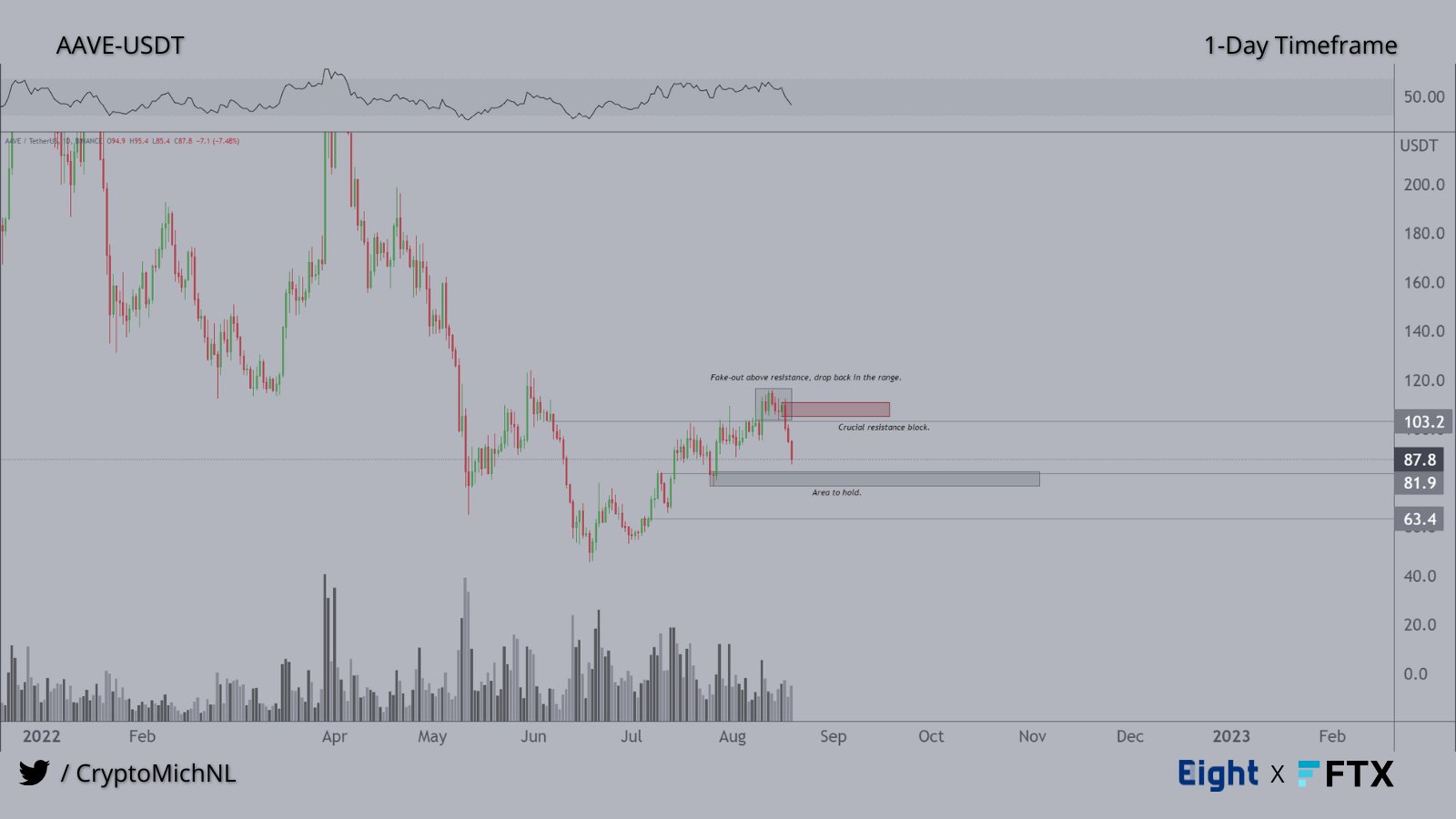 Aave has been sliding into the red all week, currently down nearly 15% on the day and trading for $84.31.

Also on Van de Poppe’s watchlist is enterprise-grade blockchain platform Elrond (EGLD), which has been steadily dropping since August 10th. The analyst is setting two levels of support: one at $50 and then $44 if the first capitulates.

“An important level of support and confluence on multiple timeframes.

Gap has been filled, which was practically the last one. Arguments for a bottom around the markets could be there. 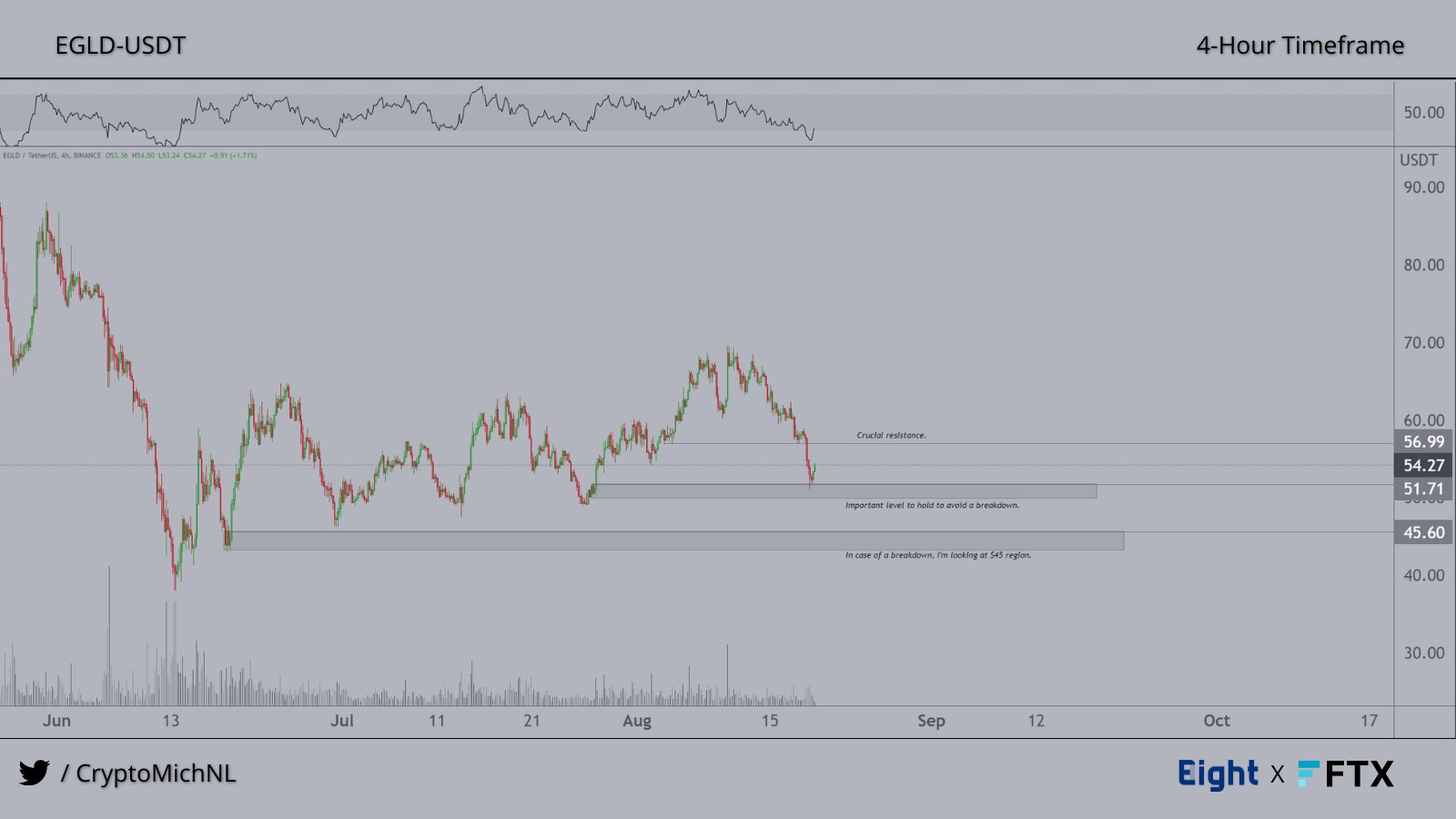 Regarding cross-chain interoperability protocol Polkadot (DOT), the crypto analyst thinks that a rally to $8.40 is possible if $7.70 is recaptured. However, Van de Poppe cautions about the potential for DOT to lose support at $7.

Otherwise, the patience game happens, and you’ll have to see whether sub-$7 is a trigger for longs.” 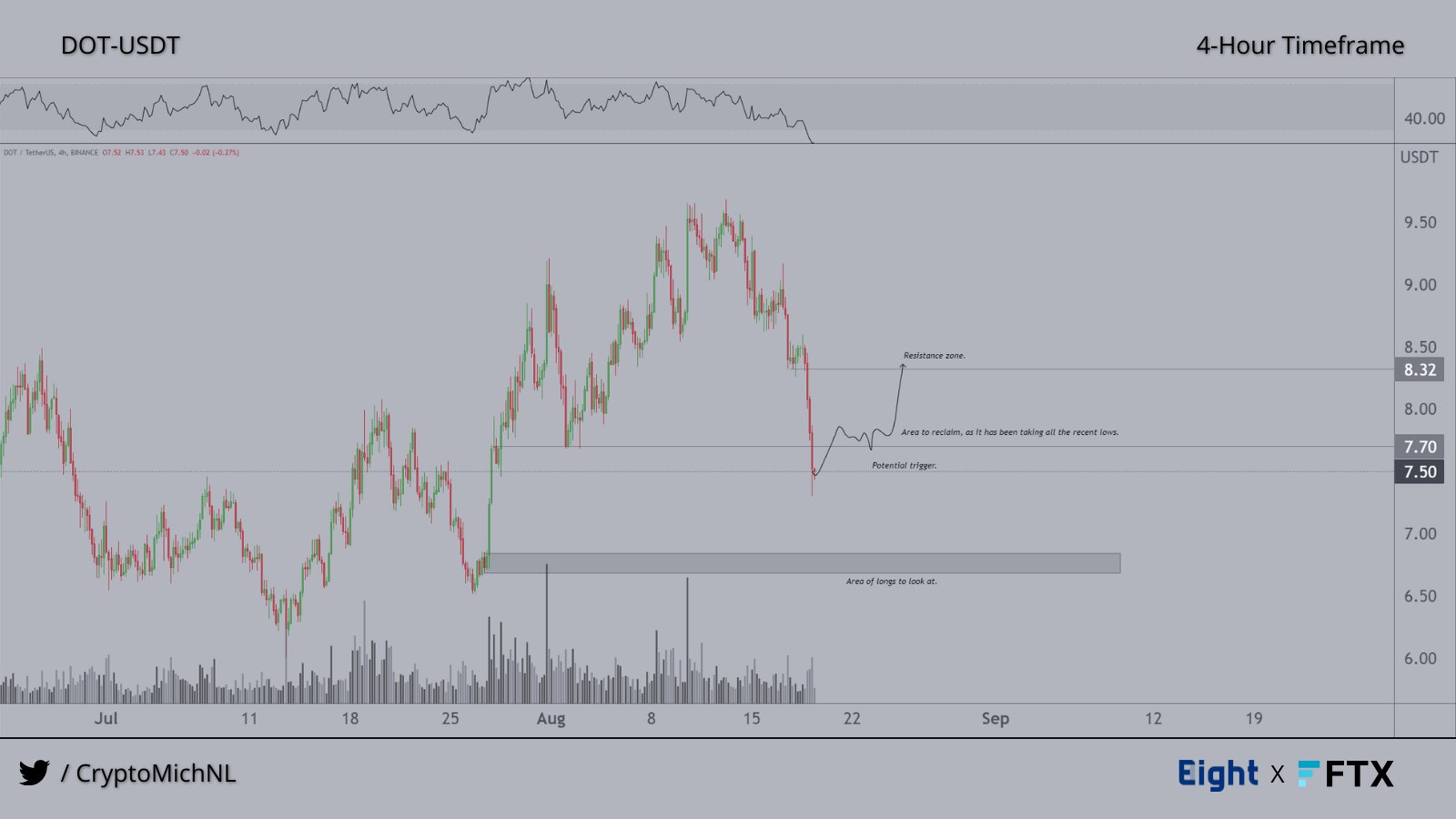 Polkadot’s price mirrors the overall crypto market slump to end the week, with DOT currently in the red by nearly 12.5% and valued at $7.35.

Last on Van de Poppe’s radar is EOS (EOS), an open-source and decentralized platform whose smart contract capabilities make it a direct competitor to Ethereum (ETH).

In response to the altcoin’s mid-week rally in defiance of broader market trends which was soon followed by a sharp corrective move, the trader advises his followers to not go running after coins that are already pumping.

“Looking at the structure, you should learn a lesson from this recent move of EOS. Avoid chasing pumps! 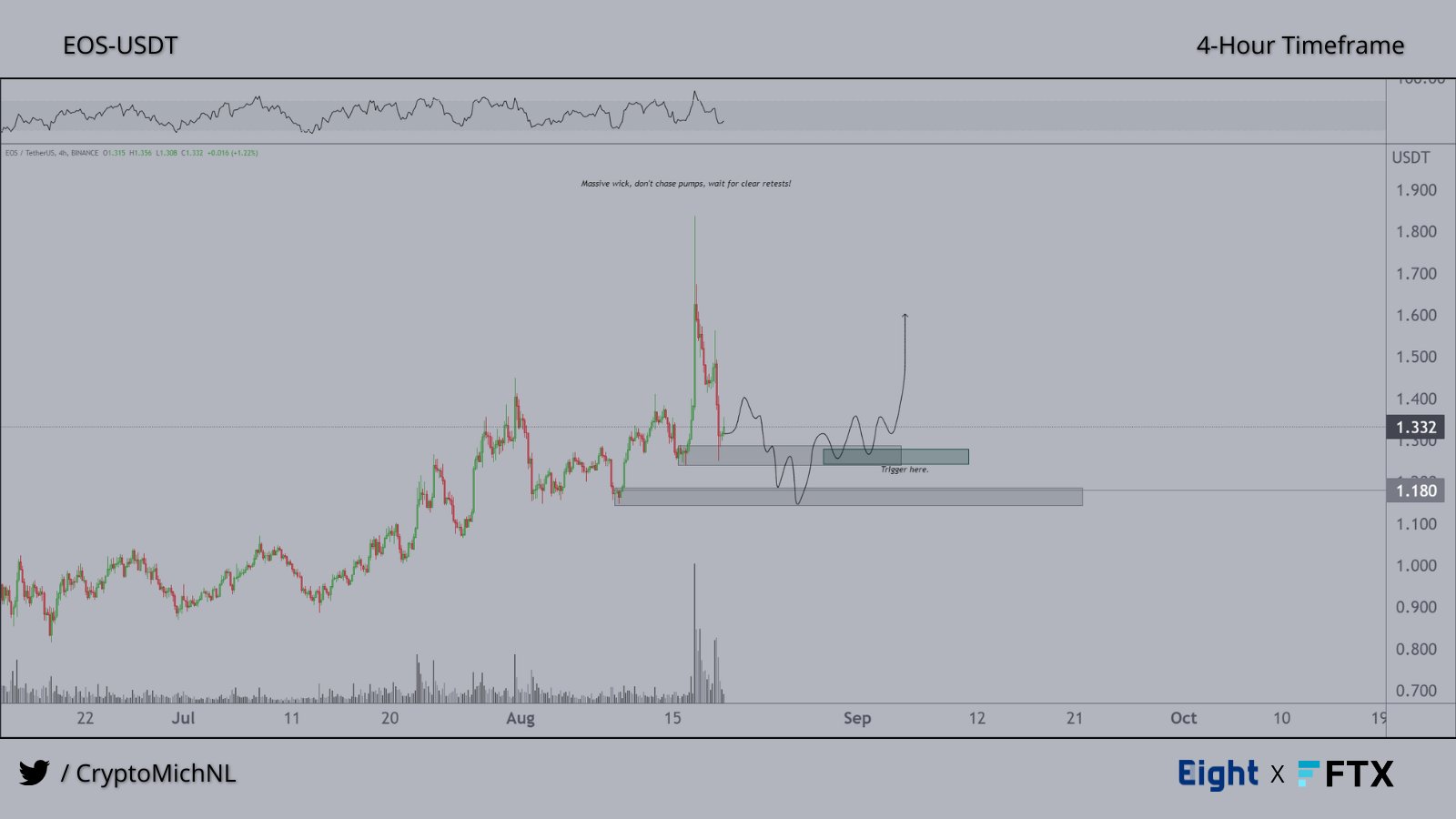