A closely followed crypto analyst is forecasting a surge for an Ethereum (ETH) challenger as one of its on-chain metrics shows promising strength.

In a new video update, the pseudonymous host of InvestAnswers tells his 442,000 subscribers that Ethereum rival Fantom (FTM) and its steady rise in transactions per day could signal bullish action for FTM in the near future.

“This is the Fantom transactions compared to Ethereum. As you guys know, I like to look at transactions. Transaction rates, daily active users, stuff like that… Here, if you look at the number of the transactions per day, Ethereum at 1.2 million transactions versus Fantom 922,000. If you look at the graph, Fantom… it’s going slowly since May 2021. So it’s slow and steady and that sometimes is very good. It wins the race.

We’re not seeing a huge dropoff in transactions like other chains, so this is bullish for Fantom. It might be worth another look.” 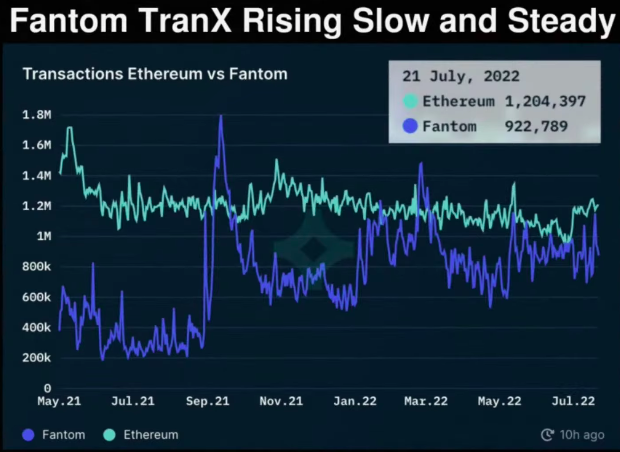 Looking at FTM’s technicals, the analyst says the smart contract platform is targeting a signficant rally from current prices if Fantom manages to take out its immediate resistance.

“Now what’s interesting as well, when you look at Fantom… There’s a little bit of resistance around $0.34, and potentially a 12-20% run beyond that as we go forwards. So who knows, we could go back up to $0.40 pretty quick or even a little bit more.

Now there is a bullish thesis on this… Also when you look at the volume on Fantom, it did 310 million in volume, which is a big gain from previous volume. So a lot of activity is coming back.”