The gradual resurrection of the crypto market has reflected positively in the overall total value locked in the decentralized finance (DeFi) sector.

Total value locked (TVL) has been the basis for measuring the performance of decentralized applications (dApps). On Dec. 2, 2021, TVL reached an all-time high of $253.91 billion.

According to Be[In]Crypto research, there has been a rise in TVL throughout July. TVL was $86.57 billion on July 24 — a 19% increase since the first day of the month, which was roughly $72.6 billion.

TVL is the total value of digital assets deposited into decentralized applications. TVL also represents the sum of all staked cryptocurrencies that bring in consistent passive income to holders in the form of interest and rewards through dApps.

Contents hide
1 What contributed to the soaring total value locked?
2 TVL rises across the board

What contributed to the soaring total value locked?

A spike in the TVL in seven of the top 10 smart contract chains can be credited for the increase in overall total value locked.

Ethereum remained the blockchain with the most value locked in July. On July 1, Ethereum TVL was around $46 billion and on July 24, the figure jumped to approximately $55.4 billion.

Binance Smart Chain (BSC) has reclaimed its spot as the chain with the second most value locked after the collapse of Terra. On July 1, BSC TVL was in the region of $5.97 billion. On July 24, BSC TVL was about $6.64 billion. Similar increments were seen across the board during the day.

TVL rises across the board

Similar growths were seen with Avalanche which jumped up from $2.68 billion to $3.07 billion.

Polygon and Cronos also witnessed a growth in TVL by $240 million and $100 million respectively. 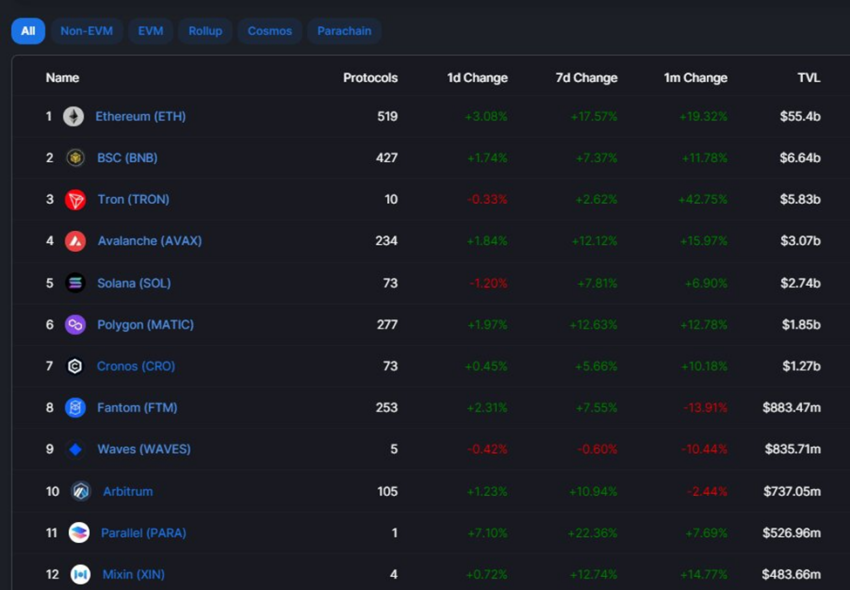