Dogecoin is increasingly connected to illicit activity including Ponzi schemes, the financing of terrorism and child sex abuse material (CSAM), according to a new report by blockchain analytics firm Elliptic.

Per the report, the meme coin has enjoyed growing popularity as a method of payment; however, aside from legitimate causes, it has also caught the attention of bad actors, with “millions of dollars worth of Dogecoin transactions connected to illicit activity,” identified.

“While the vast majority of this activity consists of fraud, scams and ponzi schemes, it also includes the most serious types of crime, including terrorism financing and vendors of child sexual abuse material (CSAM),” said Elliptic. 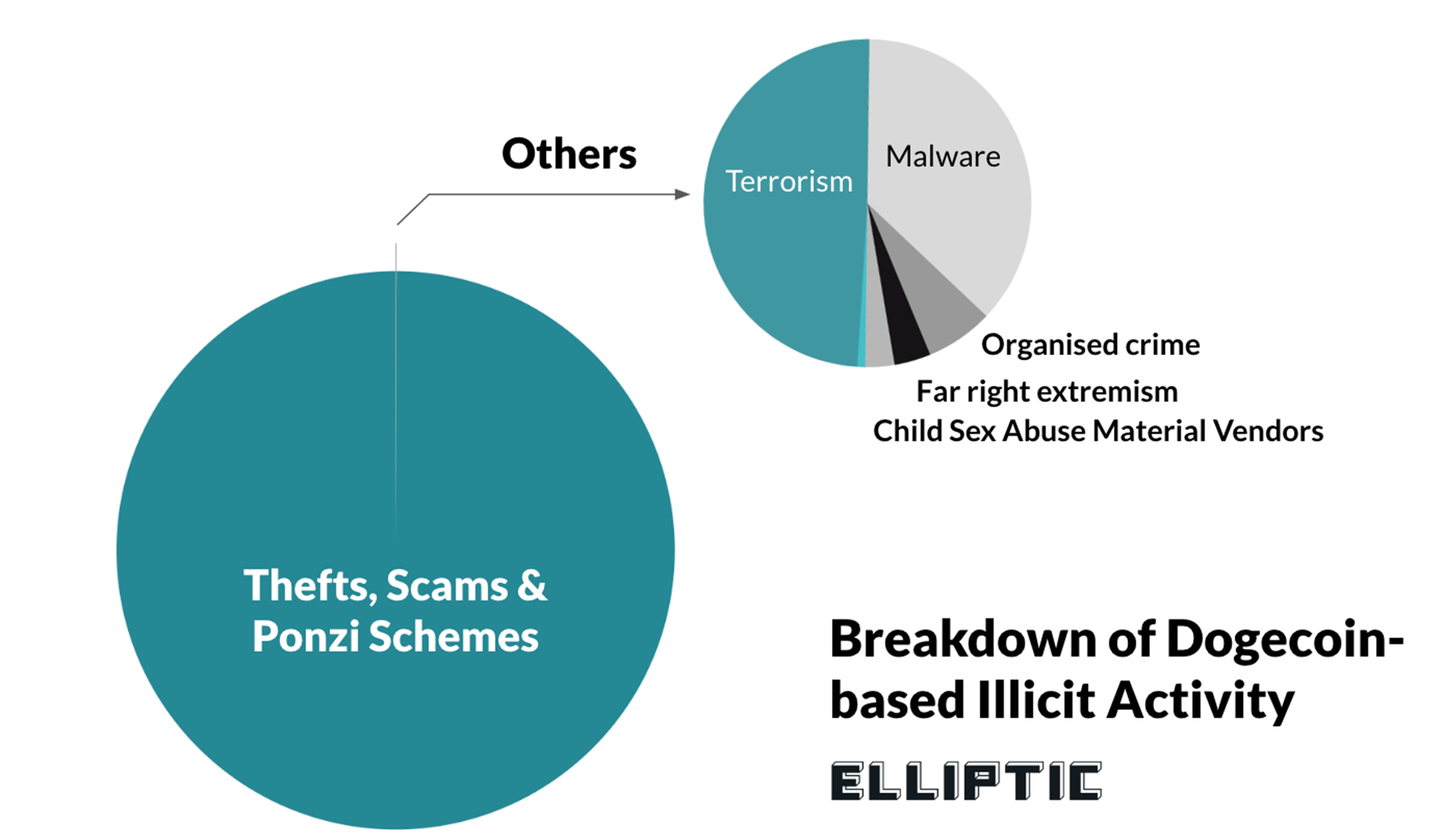 Breakdown of illicit use of Dogecoin. Image: Elliptic

Pointing to the “increasing adoption” of Dogecoin for terrorism financing, the report cited a July 2021 seizure order conducted by Israel’s National Bureau for Counter Terror Financing against 84 crypto addresses believed to be linked to militant group Hamas or otherwise used in terror-related activity; among the crypto addresses were wallets containing $40,235 in DOGE.

The report also flagged up a “small and growing number” of CSAM vendors operating both on the darknet and clearnet that have received payment in Dogecoin. Although the actual amount of Dogecoin identified by Elliptic in this case is low—less than $3,000—analysts warned that it points to an “appetite for criminal actors to adopt a wide range of cryptoassets in a bid to avoid notice.”

Elliptic has identified millions of dollars worth of Dogecoin transactions connected to illicit activity including terrorism financing and vendors of child sexual abuse material (CSAM). https://t.co/a4x5pD1nuC#doge

The “most notable” crime relating to Dogecoin, according to Elliptic, is thefts, scams and Ponzi schemes.

According to the firm, to date it has identified more than 50 instances of thefts, frauds and Ponzi schemes which helped criminals to make “hundreds of millions of dollars worth of Dogecoin.”

According to the firm, these include numerous far-right news sites, blogs and video sharing platforms.

One such news website, Infowars, which claims it is “battling globalism and promoting a pro-human future worldwide,” has so far raised more than $1,700 (£1,383) in Dogecoin.

Elliptic’s findings mirror those of the Financial Action Task Force, which last year reported that far-right groups are increasingly turning to cryptocurrencies including Bitcoin and privacy coins.

Dogecoin, which in recent months has been heavily promoted by Tesla CEO Elon Musk, is currently the world’s 10th largest cryptocurrency with a market capitalization above $8 billion.