A warning by Tesla and Spacex CEO Elon Musk about the mounting national debt in the U.S., government spending, and the proposal to tax unrealized capital gains has highlighted the benefits of cryptocurrencies, particularly bitcoin.

Tesla CEO Elon Musk made several tweets about the U.S. national debt and government spending last week. He also warned against the proposal to tax unrealized capital gains, aimed at billionaires, which was scuttled Friday amid questions about whether it would even be constitutional.

Musk believes that if the proposal were to go ahead, the government would not stop at billionaires. “Eventually, they run out of other people’s money and then they come for you,” he tweeted early last week.

Commenting on a Washington Post article stating that he would “pay as much as $50 billion under the tax over its first five years, while Bezos could pay as much as $44 billion,” the Tesla CEO tweeted to his 61.7 million followers: “According to their own estimates, this tax only covers ~10% of the $3.5 trillion spending bill. Where will the other 90% come from? The answer is you.”

The Tesla boss proceeded to explain that the U.S. national debt is currently about $28.9 trillion or $229K per taxpayer, asserting that even if all billionaires are taxed at 100%, it would only make a small dent in the debt number. “The rest must come from the general public,” he stressed. “This is basic math.” Musk elaborated: 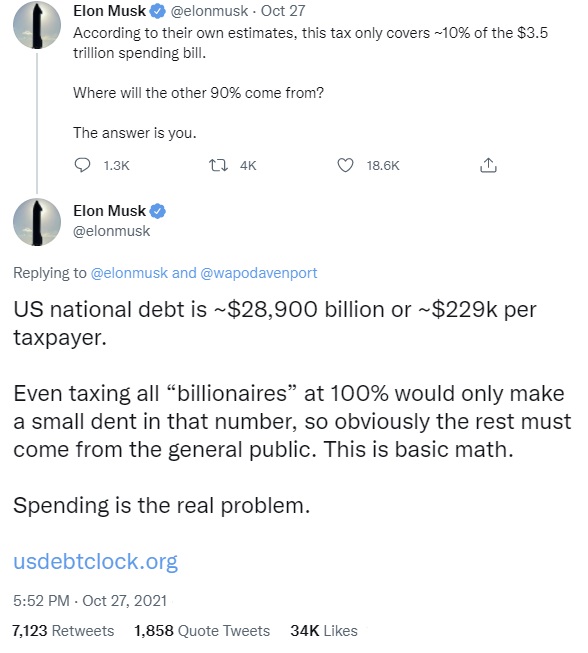 Musk’s comments have drawn much attention. At the time of writing, his tweet has been liked 34K times and retweeted 7,123 times.

Some people strongly disagree with Musk, accusing the Tesla billionaire of not understanding economics and avoiding paying taxes. “Has anyone explained money creation to Elon?” one person tweeted.

Several pointed out that his companies are heavily subsidized by the government. One person wrote: “How do you think you became the richest man in the world? Could’ve been the $5 billion the US government gave you to start your companies?” Another said, “Spacex and Tesla only exist because of government spending.”

A third person acknowledged that “Taxation is theft,” but told Musk: “You’re a hypocrite … Pay back the billions in government subsidies you received first and then you will be able to argue against taxation.”

‘Bitcoin Has Become so Valuable’

Meanwhile, many people agreed with Musk on the government spending problem and mounting national debt, stating that this is why they put their money in crypto. Marcelo Claure, CEO of Softbank Group International, simply replied, “Totally agree.”

Lawyer John Deaton described: “The politicians’ intent is so transparent. Classic divide & conquer strategy by employing class warfare. It’s only against the billionaires – Until it isn’t. Do the math.”

Coinbase CEO Brian Armstrong agreed with Musk, stating: “Exactly — it’s gotten completely out of hand. If they are going to keep printing to service the debt and cover the deficit, then this will accelerate the move into crypto.”

The mayor of the city of Miami, Francis Suarez, who has been trying to build his city into a bitcoin hub, chimed in:

It’s why bitcoin has become so valuable. An unmanipulatable currency/store of value.

On Sunday, Musk said that he would sell his Tesla shares if it would solve the world hunger problem. Responding to a comment by the director of the United Nations’ World Food Program (WFP) that 2% of his wealth could solve world hunger, Musk wrote: “If WFP can describe on this Twitter thread exactly how $6B will solve world hunger, I will sell Tesla stock right now and do it.” However, he emphasized: “But it must be open source accounting, so the public sees precisely how the money is spent.”

Ethereum Profitability Dumps To 2-Year Low As Price Corrects Below $2,000

Bitcoin Is Both Risk-on and Risk-off as It Evolves