Despite presumably being an interesting option for traditionally minded investors, trading volumes of European ethereum (ETH)-backed exchange-traded funds (ETFs) have struggled during the second half of this year. In Canada, on the other hand, the trend is moving in the opposite direction, indicating strong North American demand for ethereum ETFs.

As many readers may already know, there are still no ether-backed ETFs listed in the US, although some analysts argued that the first ether futures-backed ETF could be coming soon. For now, however, the alternative for most investors is therefore to look for ETFs and various other exchange-traded instruments listed in Canada or Europe.

A notable difference from the potential US-listed ethereum ETF is that the funds that are trading in Europe and Canada all hold actual ETH tokens, and not futures contracts that are generally settled in fiat currency.

Meanwhile, in Australia, the local ETF issuer ETF Securities announced in early December that it teamed up with Switzerland-based 21Shares to launch the country’s first ethereum-backed ETF. However, the fund is not yet trading live, with no confirmation on when the listing date might be.

*Generates yield that is paid out monthly from selling ether covered call options.

First of all, comparing all of these funds to the underlying ETH spot price shows us that the ETFs generally do a good job at tracking the price, which obviously is key for investors looking for a way to get exposure to the price without holding the underlying asset themselves.

As an example of this, we can take a look at the 21Shares Ethereum ETP (AETH) traded in Switzerland, and compare it with the spot price of ETH on crypto exchange Coinbase since the beginning of 2021.

21Shares Ethereum ETP in blue and ETH spot price on Coinbase in orange: 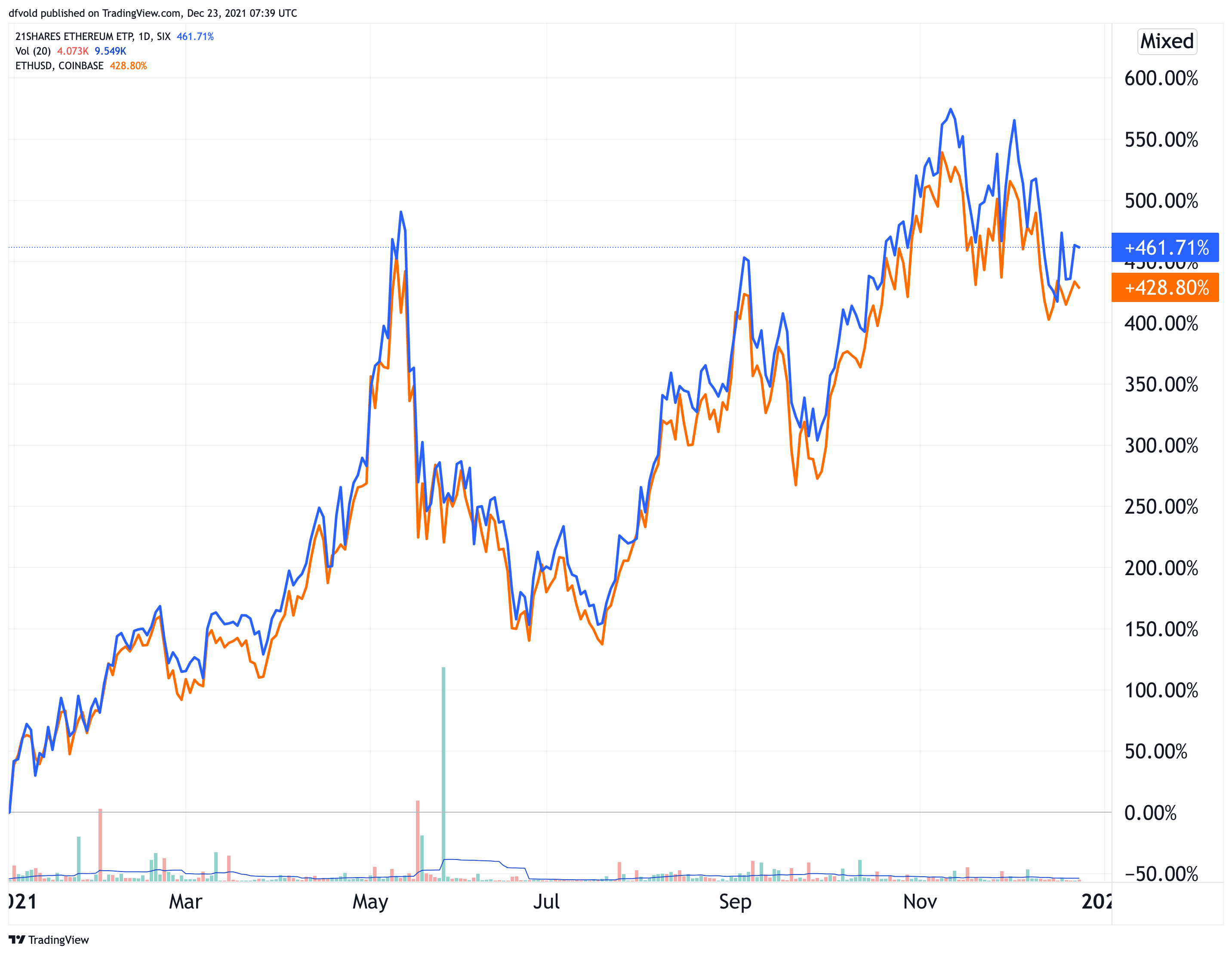 And while the price of all of the ETFs in our list appears to track the underlying spot price fairly well, a recent drop in trading volumes on some of the products could be a sign that investors are losing interest, or that the market for ETH-backed ETFs is already saturated in Europe.

Comparing the trend in trading volumes (as shown by the 50-day moving average) since July across the different ETFs shows that nearly all of them are seeing fewer shares change hands now than they did six months ago.

The downwards trend in volume (black line) is obvious when looking at for example the WisdomTree Ethereum ETF traded in Switzerland: 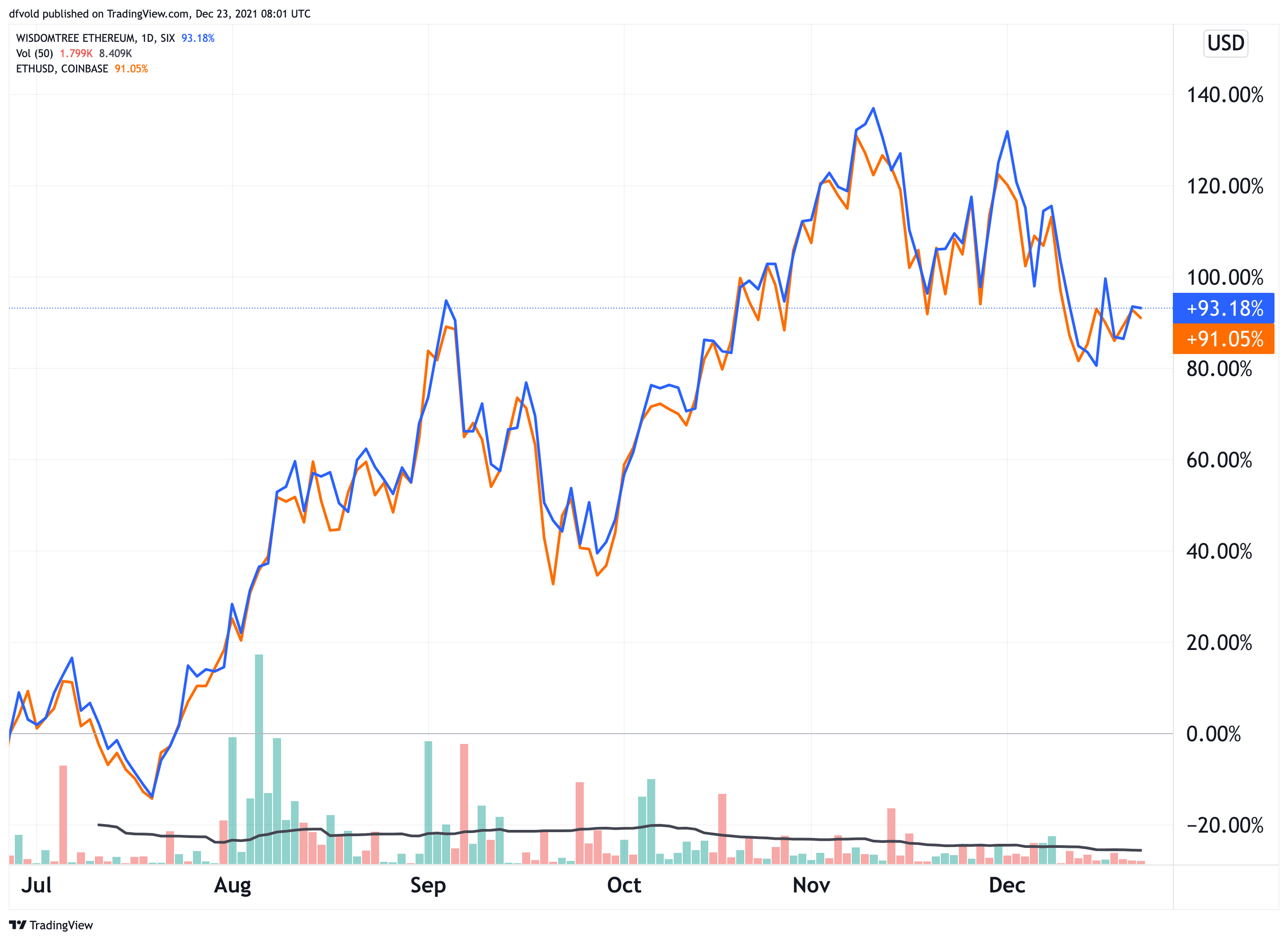 The same also goes for the CoinShares Physical Ethereum ETF, which has seen a steady decline in volume since a peak in trading activity recorded in August and September this year: 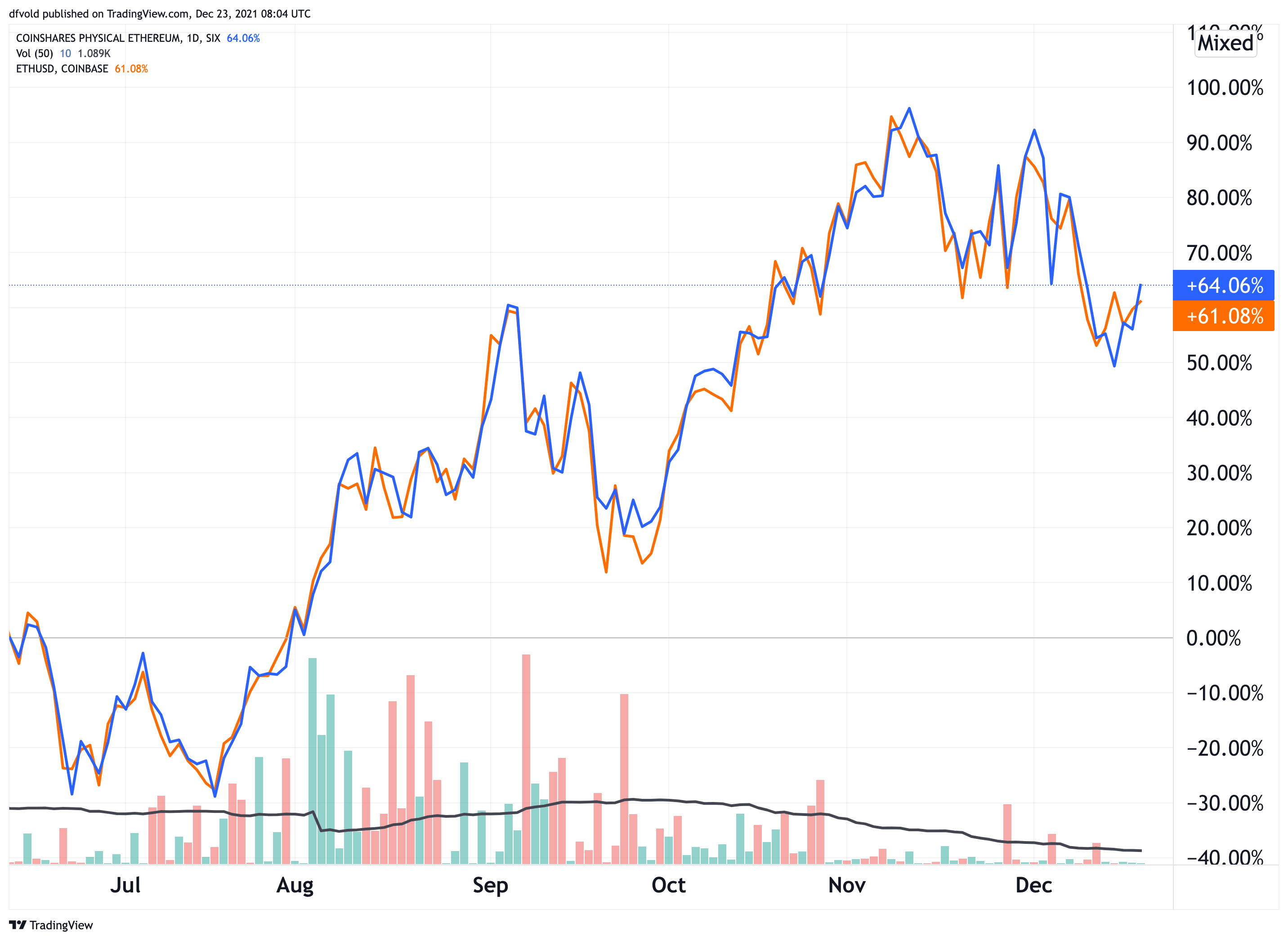 In Canada, however, the picture is different, with most of the ether-backed ETFs listed here showing no signs of falling trading volumes at all, even as the price per share of the ETFs has risen significantly.

Looking at the CI Galaxy Ethereum ETF (ETHX) traded on the Toronto Stock Exchange shows that trading activity has remained strong throughout this fall, with the 50-day moving average of the trading volume remaining more or less flat: 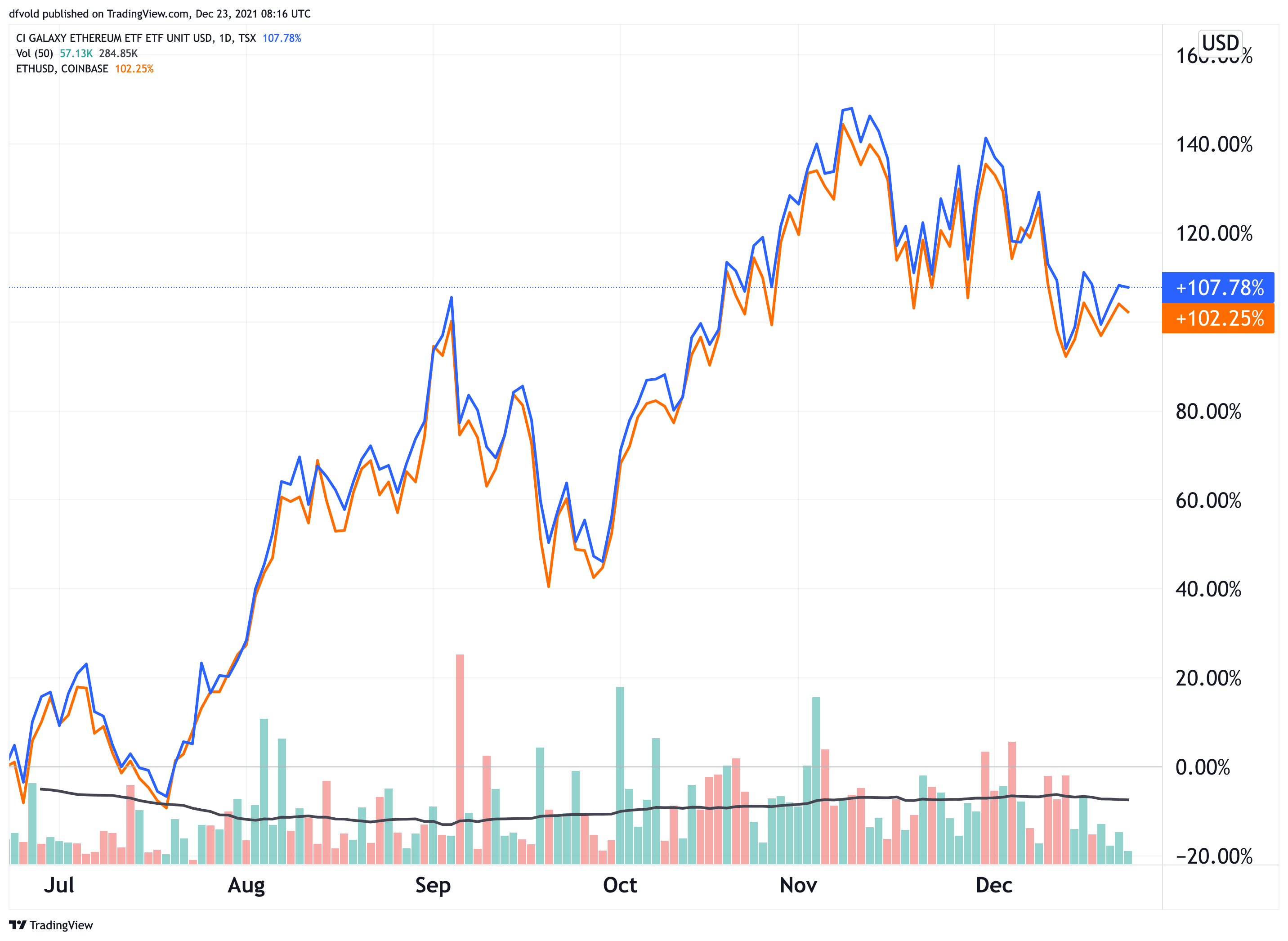 Similarly, the Evolve Ether ETF (ETHR), which is also traded in Toronto, in fact shows rising trading volumes as ETH prices have risen this fall. The 50-day moving average of the trading volume in December was still trending upwards, indicating strong and rising demand among traders for this ETF: 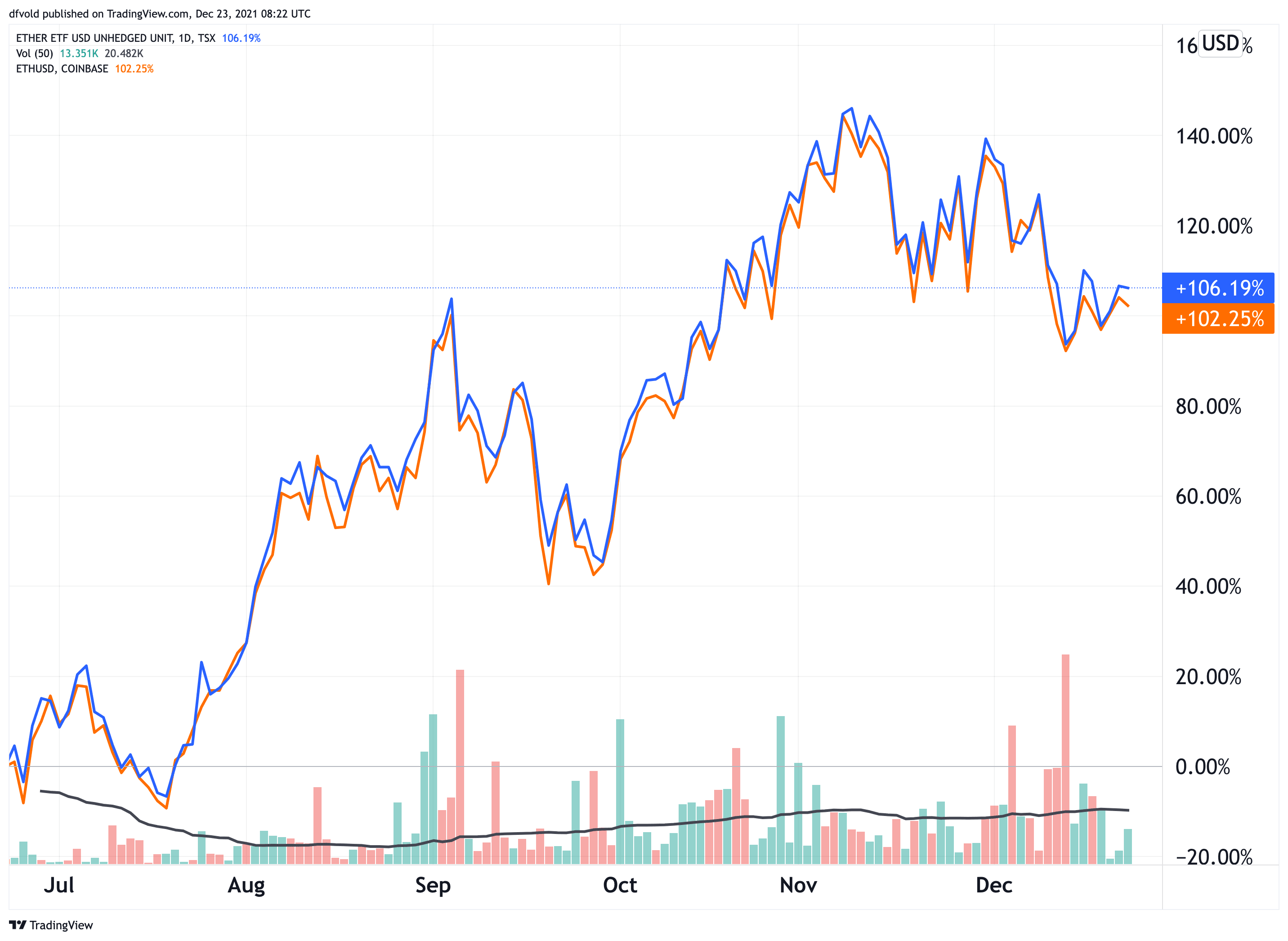 Lastly, trading volume in the Canadian Purpose Ether ETF has also remained strong throughout the second half of this year, with even slightly rising volumes seen in late November.

The 50-day moving average of the trading volume for this ETF has remained mostly flat, although it is worth noting that the indicator is currently at its highest level since late July, when the price of ETH was hovering around the USD 2,000 mark. 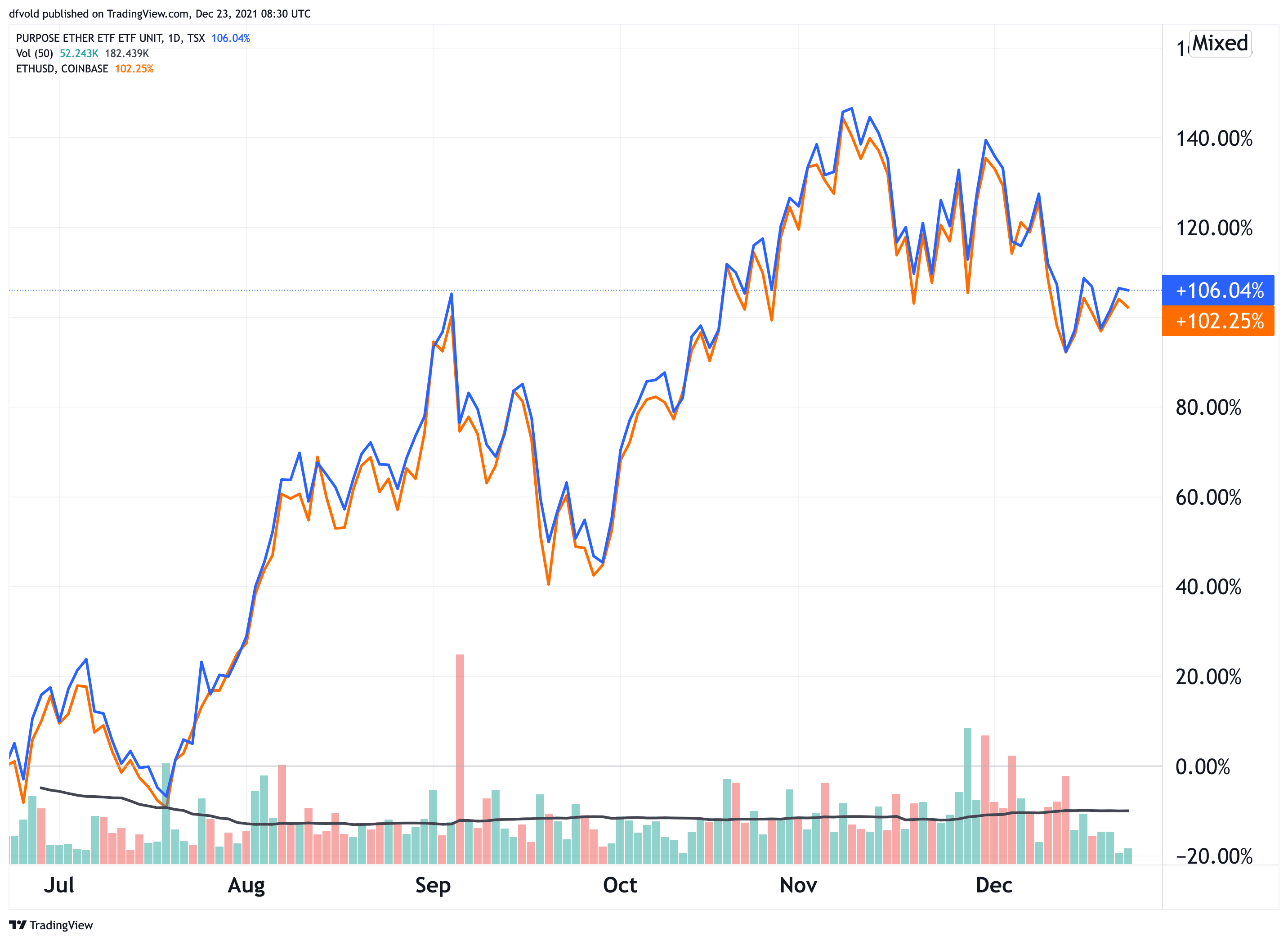 As can be seen from these examples, demand for ethereum ETFs appears pretty strong among traders and investors in the traditional financial markets. However, a notable difference is that while the market in Europe is showing signs of saturation, demand in Canada remains strong, despite the fact that the price per share of the ETFs has risen significantly during the second half of this year.

While it is unclear exactly what the reason for this divergence in volume is, it could certainly be a sign that North American demand for an ethereum ETF is strong, with many US-based investors taking advantage of the Canadian market as they wait for the first ethereum ETF to be approved in the US.