Bitcoin’s price finally entered a correction to flush out the leverage, cool off the overbought conditions, and help build a structure after the large rally in the past three weeks. This happened after the open interest, funding rates, and leverage ratio all reached elevated levels.

The near-term support at $60K appears to be holding, which is a positive signal. Given the current selling pressure, it’s unlikely that the weekly close will be above $64.8K. 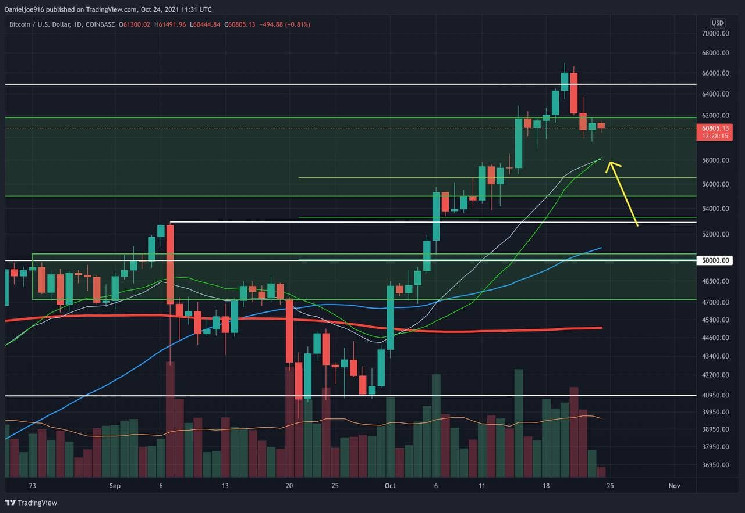 The cryptocurrency needs to continue holding $60K on a closing basis. The ideal scenario would be to hold $60K, form a cup and handle, retest $64.8K, and break out higher towards $70K to $80K.

If we see a closing below $60K, that would be a near-term bearish signal and would increase the downside risk to $59.7K, $58.3K, $57.1K, $56.5K, and $53K. Support is also expected at the 21-day EMA. The mid $50K levels also hold strong technical and on-chain support, which is a bit comforting in case of another round of liquidations. The deepest level for a pullback we’d like to see is $53K – the previous high from September. Breaking below this level would trigger more downside risk – a scenario that’s less ideal for the bulls.

The overall structure continues to suggest that BTC’s price is in Wyckoff Accumulation Phase E, where it usually accelerates to the upside but most likely with shakeouts on the way up. In the short-term, there might be a bullish divergence forming on the hourly chart, but it’s important to see bitcoin holding $60K and $59.6K for validation and start making higher highs.

Recently, it decreased for two days but quickly resumed its uptrend, suggesting that long-term holders (LTHs) were distributing lightly and that there’s no trend of serious distribution as BTC made a new all-time high.

This means that long-term holders and miners continue to hold, distributing lightly periodically. The open interest dropped by $1.2B since peaking at $15.2B, and the funding rates are currently at 0.03. The leverage ratio remains at 0.18, which is similar to that from the peaks in April and September this year. This means that further liquidations are possible, and it’s important to remain cautious. 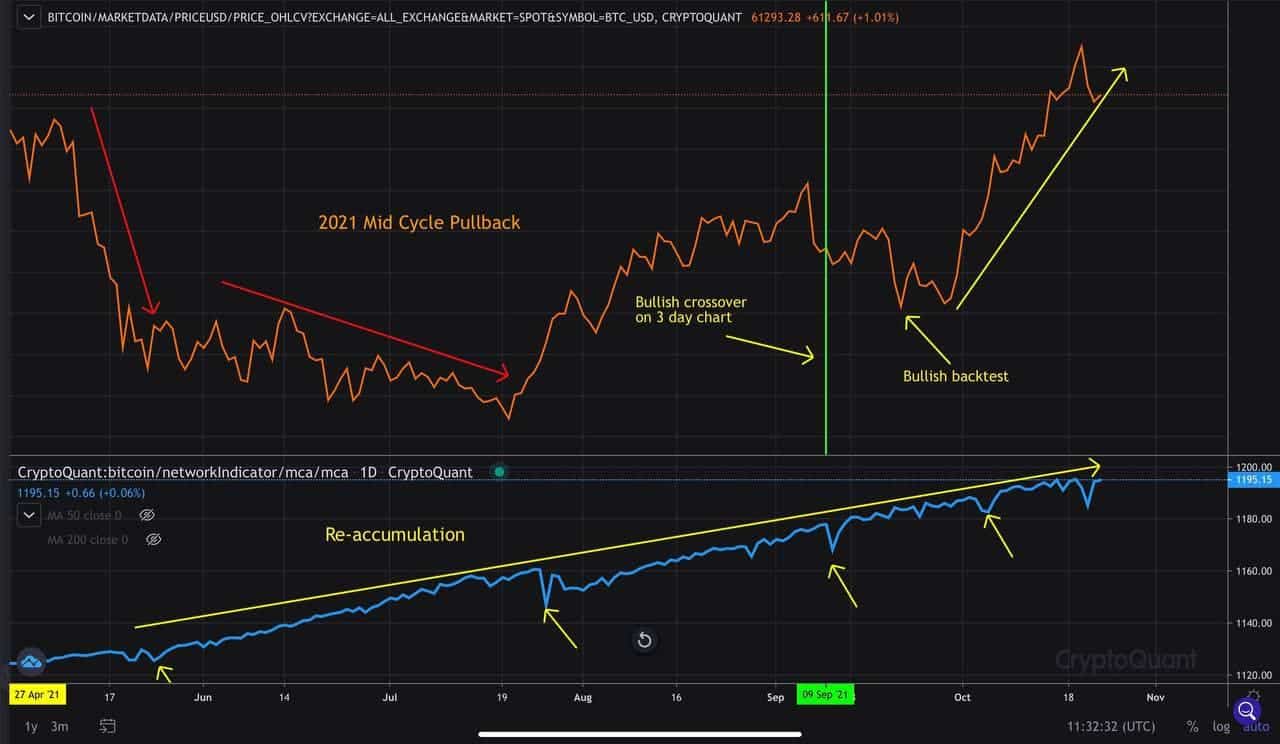 The ASOPR remains slightly above 1, indicating that LTHs are not taking profits aggressively throughout this pullback. All exchange reserves have also been dropping further to multi-year lows driven by considerable outflows on derivative exchanges.

Bitcoin becomes more scarce on exchanges which makes it more difficult for institutions to accumulate, as there’s likely going to be less BTC for sale.

Bitcoin rallied significantly in the past three weeks, and the leverage in derivatives was increasing considerably – this is why a near-term pullback could be healthy for the market.

We need to see support holding between $60K and $53K to retain the structure and form a higher low. The overall trend in fundamentals and on-chain remains bullish, and there are no signs of aggressive distribution forming, which indicates that there’s more upside remaining in this bull market.

The dollar continues to push lower after topping at a key technical level which is likely to be a tailwind for BTC, especially in the coming months.

The current correction looks to be a near-term shakeout with bullish continuation likely to follow once the leverage is flushed out, leading to a retest of $64.8K and a breakout towards $70K to $80K, so long as the trend in on-chains remains intact.

Volatility in the next few months should be expected, but bulls remain in control.