Macro guru Raoul Pal says that digital asset markets could be gearing up for a major trend reversal to the upside if one main metric is any indication.

In a new market update on Real Vision, Pal says crypto markets are mostly driven by the liquidity that comes from M2 money supply.

M2 money supply roughly refers to the total amount of currency in circulation, plus near money, or highly liquid non-cash assets that can be easily converted to cash.

While many crypto investors focus on the Bitcoin halving, which is when the amount of BTC issued per block reward gets cut in half, Pal says M2 likely plays a bigger role.

“Crypto isn’t driven by the business cycle, but it’s driven by global liquidity. So this is the global M2 deviation from the trend. So it’s the rate of change of M2 and how far away it is from the trend. And it’s about one and a half standard deviations away from the trend, and it’s turning higher.

That time it ever happened, both at the top and the bottom, leads to the turns in the crypto markets because liquidity drives crypto. Remember, this is not a cyclical asset so it doesn’t go back to where it was like oil and commodities. It’s a network adoption model that goes up and to the right over time with these big volatile bands.

A lot of people have the narrative that this is driven by the halving. Now maybe the halving which is the reduction in the supply every four years in Bitcoin, is a factor because it’s correlated with liquidity. So what you’re doing, you put more liquidity into the markets, it leads to more people able to allocate capital into a low supply environment which is the halving. You don’t need the halving as a necessary precursor.” 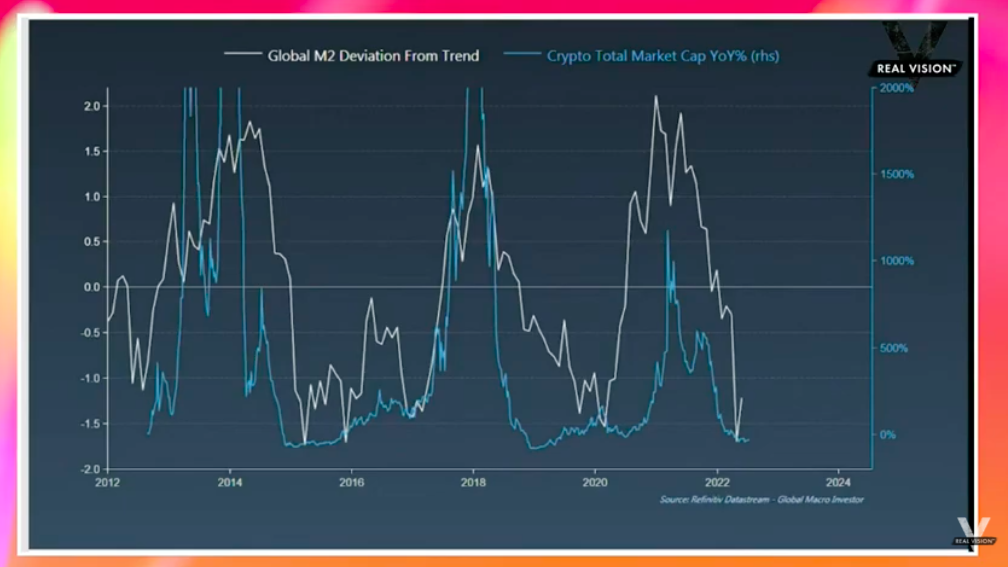