Search data shows global interest in Bitcoin has sunk due to its volatile performance over the last five months.

Google Trends is a popular tool used to gauge general interest in trending topics. In respect of the search term “Bitcoin,” it currently shows a value of 30 for the week ending March 19, 2022.

This marks the lowest level since the start of October 2021 and represents a significant decline from mid-May, when interest peaked at 100.

Over the past three months, Bitcoin has been trading between $33,000 and $45,700. This lull in price action appears to have driven away investor interest.

Bitcoin Interest has not recovered from Elon Musk’s energy rant

Searches tend to rise during periods of extreme volatility, as potential investors look for information on bullish or bearish market activity.

For example, May 2021’s peak interest score of 100 occurred when Elon Musk said Bitcoin Proof-of-Work mining is highly damaging to the environment. This triggered a 50% drop in the Bitcoin price over ten days.

By June 2021, Google searches for Bitcoin had taken a sharp drop, almost halving to 53. This set off further declines in searches, and despite posting a new all-time high of $69,000 on November 10, search interest failed to recapture the same level seen in May.

The week in which Bitcoin posted its new all-time high had an interest score of just 39. And since May’s downturn, the highest interest score occurred in the week of January 23-29, with a value of 52, a far cry from May’s peak of 100.

The above suggests that short-term “hit and run” investors are diminishing. But what about short-term holders with open positions?

On-chain data from Glassnode shows the percentage of Short-Term Holders (STHs), who accumulated within the last 155-days, are increasingly holding losses. The current portion of STH supply in loss is 82%. A persistent downtrend of profitable SHTs adds to sell-side pressure. 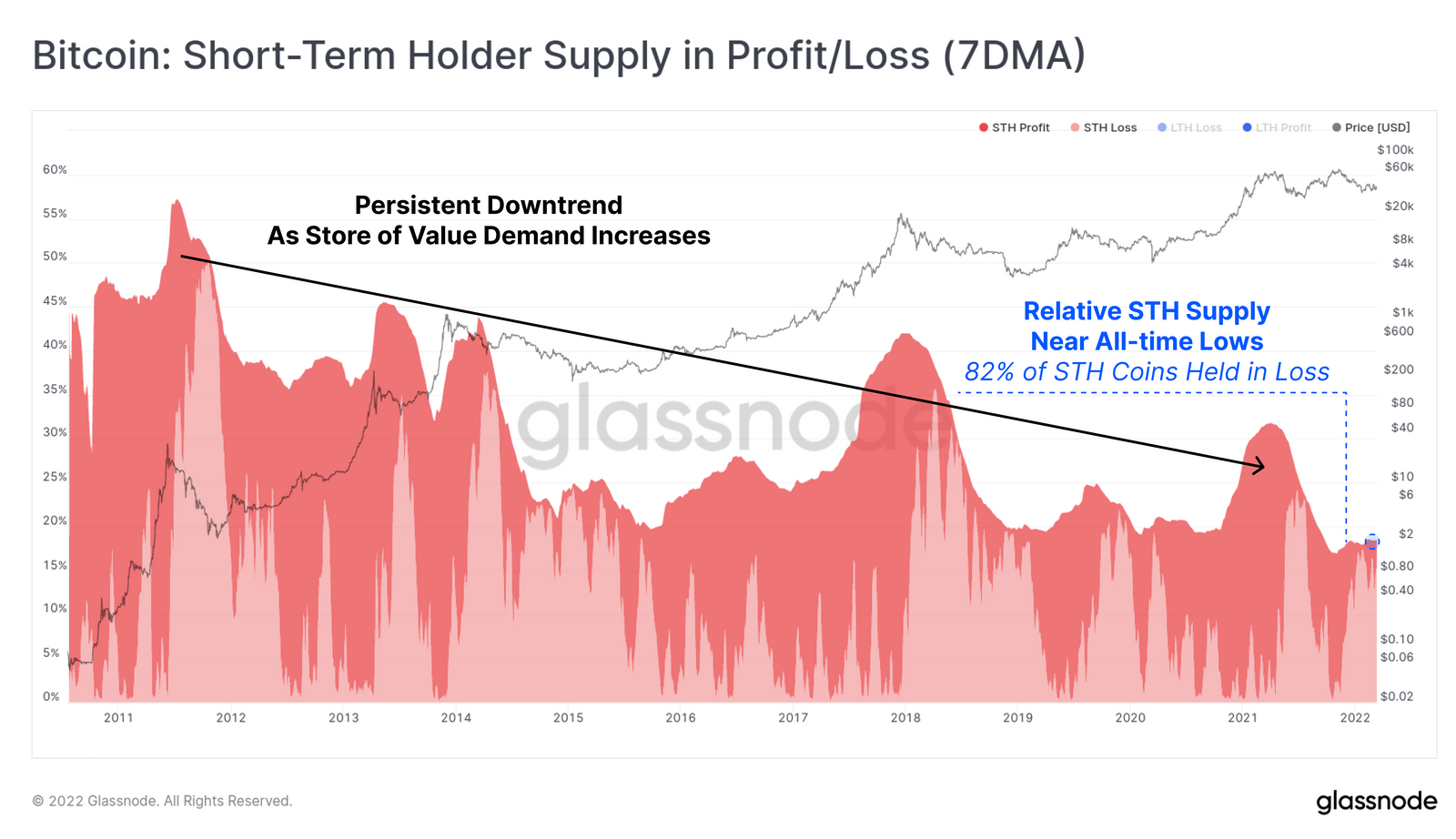 “STH supply is currently near all-time-lows which is constructive for prices. However, 82% of these coins (2.51M BTC) are currently held at a loss, and are in turn the most likely source of sell-side pressure.”

Similarly, Glassnode says the amount of coin supply held by STHs is also on the decline, which occurs when coin supply remains dormant and crosses the 155-day threshold to become classified as Long-Term Holder Supply. STH supply reaching low levels is generally associated with bear markets, as buyers send coins to cold storage for the long term.