Home Articles Inside the Crypto-Bot Ghost Towns of Telegram

Wave aside the cobwebs of the Telegram group “BitGo Cryptocurrency Exchange” and you’ll find a ghost town, populated by bots.

Once, BitGo Cryptocurrency Exchange (an unauthorized channel aimed to lure customers of the genuine and legit crypto exchange named Bitgo, which didn’t respond to a chance for comment) played host to a vital membership of real-life humans, glorious in their aliveness. Members discussed trading strategies, unwittingly sent large sums of money to fake addresses, demanded urgently that moderators tell them why they had added them to the group—a kaleidoscope of charmingly dodgy retail action. No more.

These days, the “BitGo” Telegram group features almost entirely spam-spewing bots. The bots speak only to one another, in circular riddles and unintelligible non-sequiturs. One asks how everyone’s day is going; another responds by asking if anyone will marry her, ASAP; another thanks Jesus and Satoshi Nakamoto for the opportunity to invest with BitGo; another asks what time it is.

These are robo-shillers without humans to actually scam, save for the occasional confused person who wanders into their midst. It’s like watching an animatronic carnival show run amok.

“Looking for a man who can support me,” announces a female bot named “Qingrong He” mere minutes before both solicitation and account disappear. She’s asked the same question a dozen times before; as usual, no gallant knight takes up the offer.

“Karoline,” meanwhile, announces some good news: “I have received countless winnings from this platform, thanks to Agent Morrison, I don’t know how to pay you back,” she declares ungrammatically. In quick succession, four other bots congratulate her using automatically generated variations on the same response.

“Congratulations,” writes “Mark Kidd.” “There is something special about this investment platform. I’m happy when other investors invest and receive instant payments.”

“Wow,” concurs “Alishia Bethe.” “My heart is full of joy and happiness at the moment, I have great respect for this company for their sincerity and honesty. Got my winnings back.” 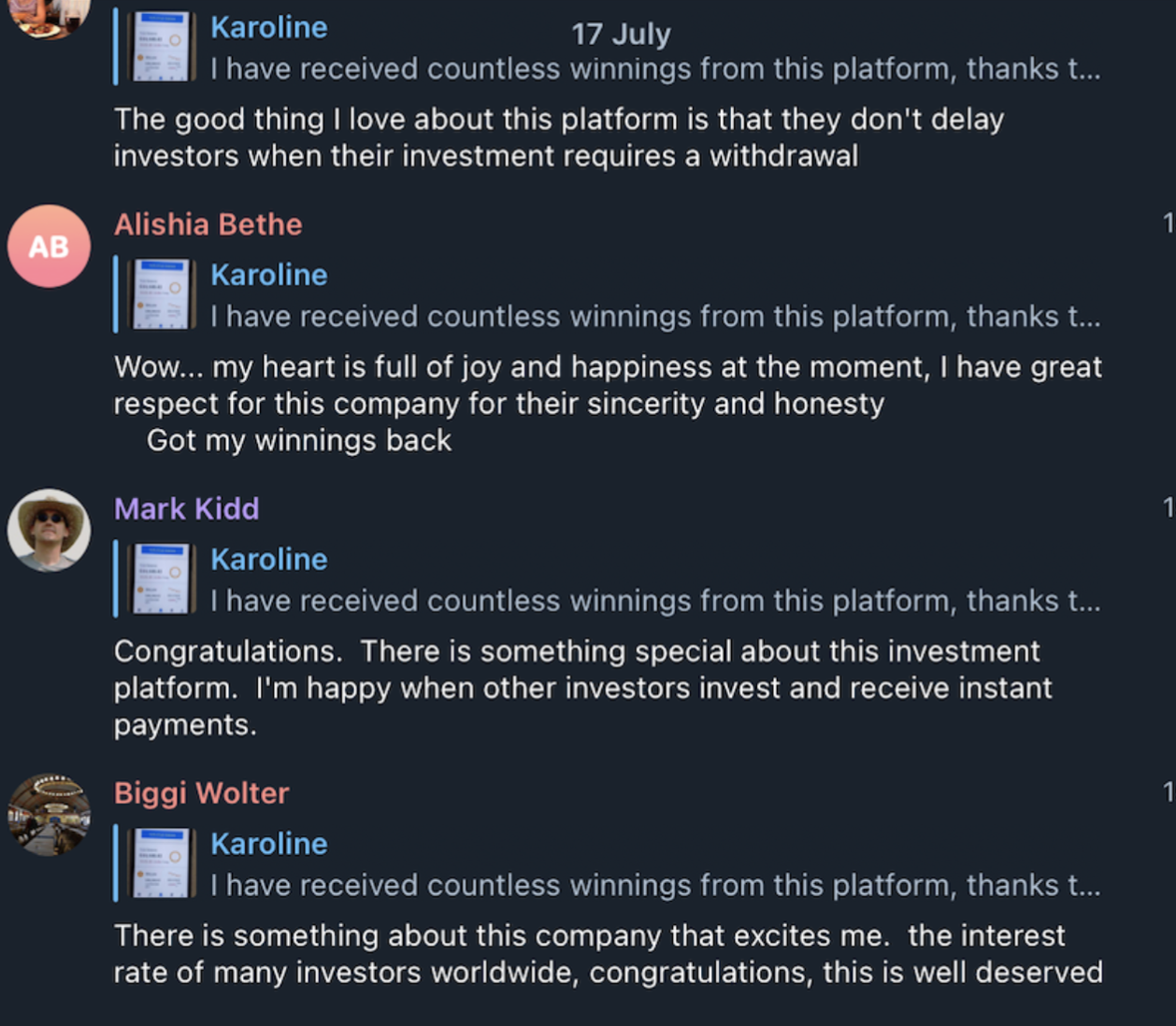 The unauthorized BitGo channel’s fate is typical of many crypto Telegram groups—“communities” initially developed around a coin, or a scheme, or a trading strategy, which over time and many market corrections, eventually die out. These places are no longer filled with retail suckers—only the bots designed to fleece them. 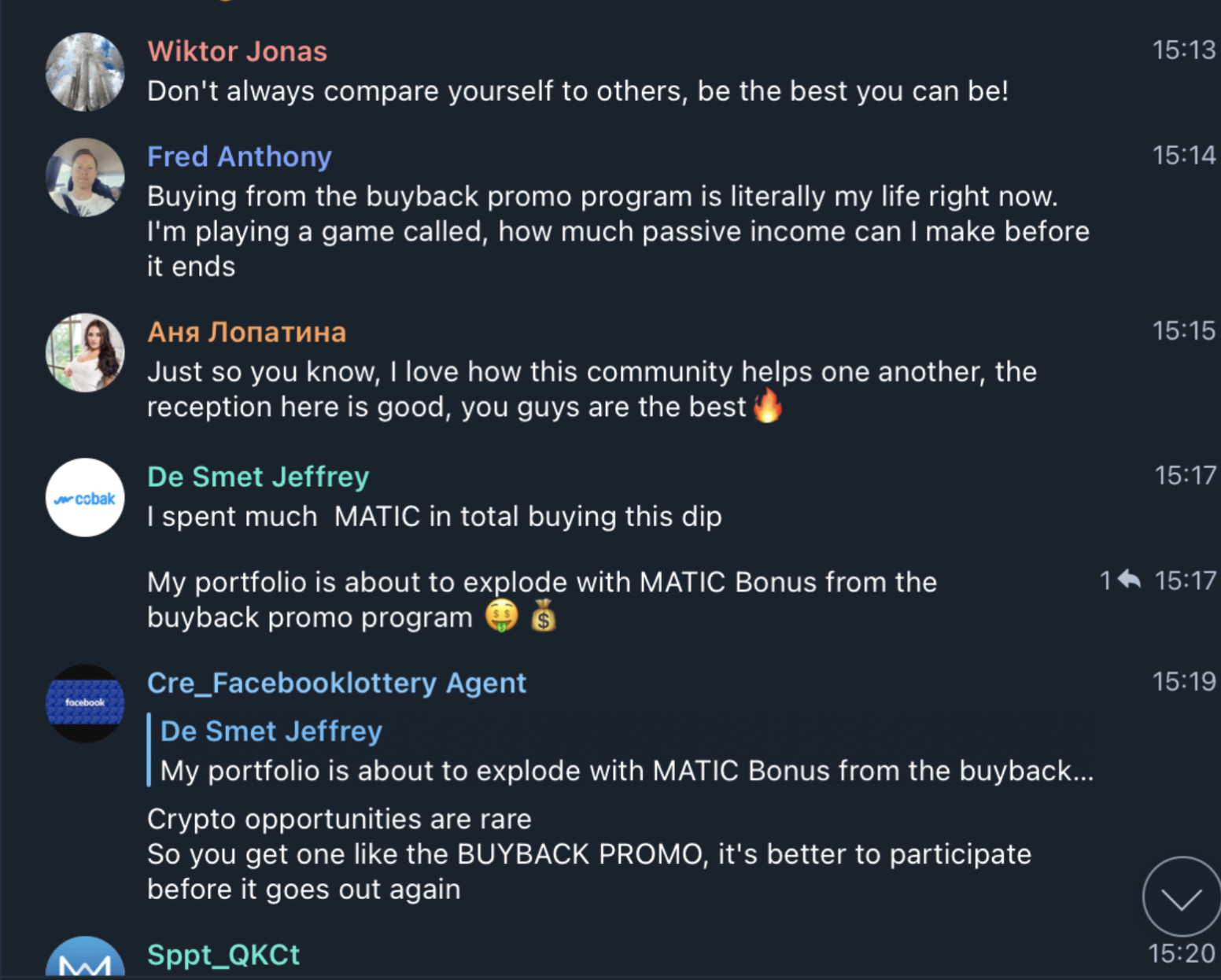 And yet, there remain some signs of carbon-based life in these otherwise barren wastelands.

As far as I could tell, the sole human member of the unauthorized “BitGo” appears to be its moderator, a person who identifies as “Morrison Bernard” and spends most of his/her time answering questions posed by the bots on his group.

Bernard claimed to me that his channel is an investment platform guaranteeing 600% returns, and invited me to set up an account. When I asked why the group’s demographic skewed toward the, er,  algorithmic, Bernard denied that there were any bots at all. The weirdly similar messages from different accounts are in fact “different write ups and Different accounts,” he Telegrammed me. “There [sic] are all real humans.”

Would one respond if we messaged them?

“Yes,” Bernard insisted. “That will be their wish.”

I tried: “Hey what’s up—can I ask you about BitGo?” I wrote in a message the other day to a few “members” of the group. “Thinking of investing.”

Alas, no one has yet replied.

Perhaps Bernard himself is a bot, like the Bernard in Westworld?

He once told me, robotically: “Cryptocurrency trading is a tool for wealth creation and it requires the knowledge of people with the operating system to achieve the best result in this platform we have well trained professionals and adequate trading softwares to perform the trading operation.”

Asked for proof of his humanness, he simply deferred to the bots singing his praises: “The testimonies in the group chat are proves [sic],” he said.

Well, I believe him! 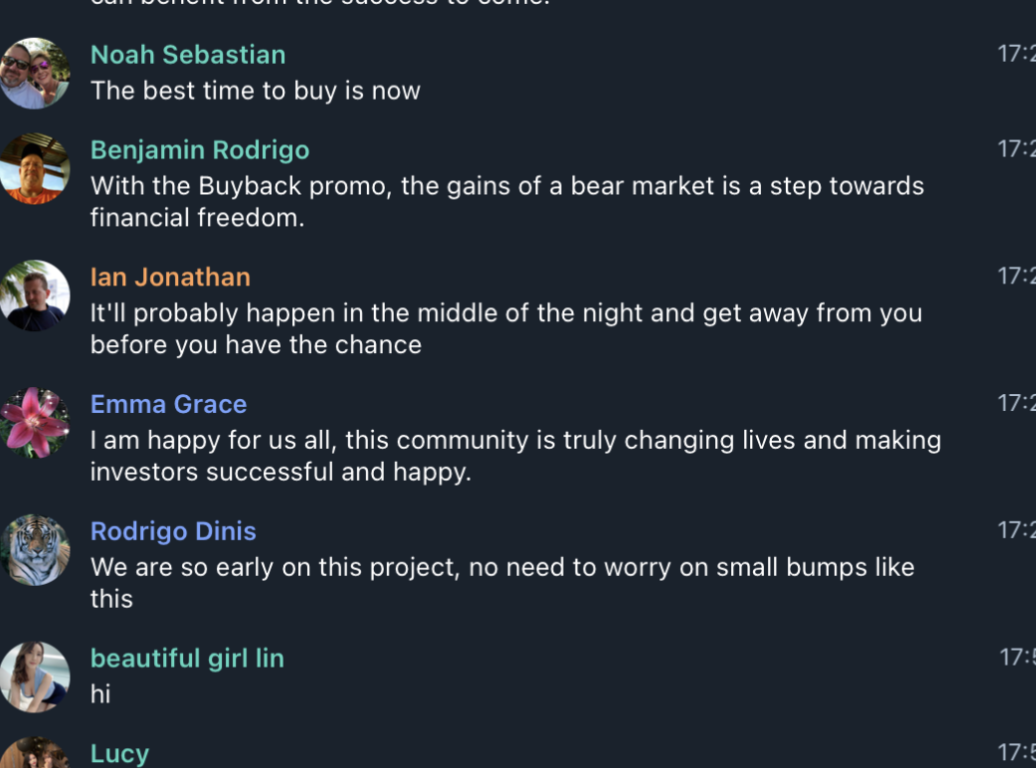 On the other hand: Maybe Bernard just programmed all the bots? They do refer to him by name. Or has he been isolated from human interaction for so long that he can’t tell where the marks end and the spambots begin?

Rami James, a human who has spent years battling the bots on a Telegram group he moderates, told me the process of bot-ification begins when the token held by a thriving community dips precipitously low for long enough. That’s usually when the issuing company is no longer able to fund mods to get rid of the bots.

“Generally,” James deliberated, “if a project is not successful in funding or managing its funds, and can not afford a team of mods, then the chat will be ripe ground for scammers.”

After the human mods have absconded, automated moderators may try to hold the fort for a while. Soon enough, though, the malicious bots, puppeteered en masse by some remote operator, will overwhelm them. Keeping bots out requires participation from the community, which doesn’t work if there’s nobody left.

I looked at dozens of these small-cap groups, each with tens of thousands of extant members, and many of them have been inundated in this way. That is where you see these bizarre bot-on-bot conversations. 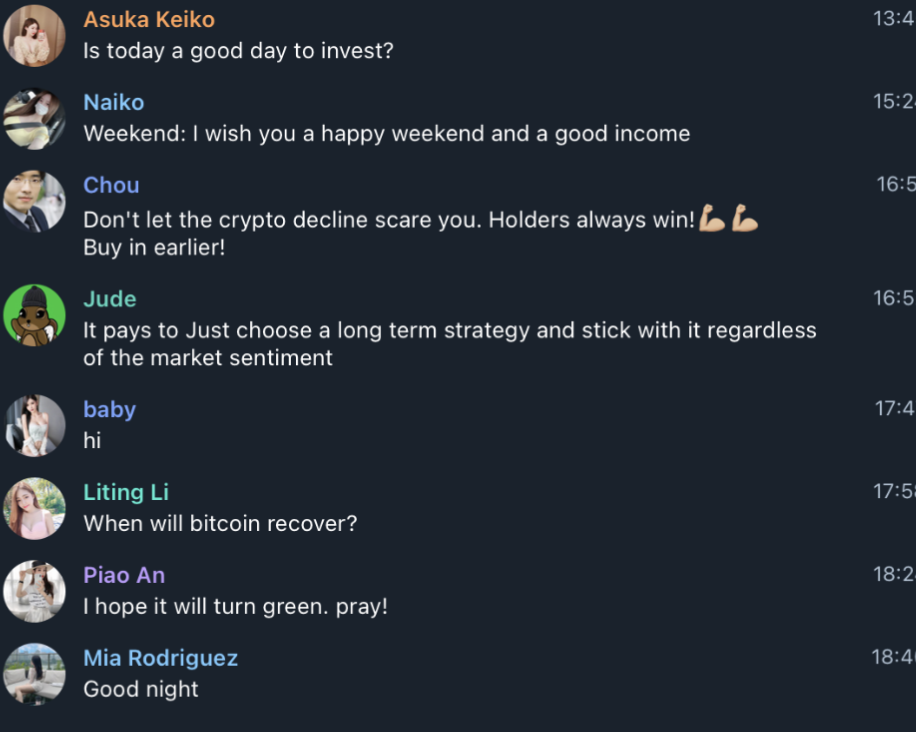 “James,” who I sincerely believe is real, moderates “Ultra Discussion” for the eponymous token, which is the 189th most valuable according to CoinMarketCap. He told me he keeps the token’s loyalists rallied (and the bots at bay) with a heady combination of information—reports and news, for instance—that “assures them.”

“For example,” he said proudly, “today we partnered with Swissborg to deploy a DEX to our network.”

But keeping the group afloat is an endless uphill battle. The bots have gotten smarter and better resourced, he said, and are now “leveraging human psychology to avoid being seen as bots to entice people to leak private data.”

Hence the solicitations for crypto romance and uncanny-valley attempts at casual call-and-response. Armies of these bots are often controlled by a few people, James added, and all it takes to make a profit is for one gullible human among the sea of automatons to fall for a humanlike post. “The failure rate is astronomical, but non-zero,” he said.

Where Does Bitcoin Maximalism Go From Here?

Apparently some of these bots are lifelike enough for humans to tolerate working alongside them. The moderator for a group centered around a dazzlingly valueless altcoin called Ravencoin, which lost 70% of its value in the past year, told me he was an OG holder of the coin before he became a mod.

“Ravencoin Official” has over 21,000 members, but many of the active members exhibit the same robotic awkwardness of the “BitGo” bots. Nevertheless, the mod—who identifies only as “RVN_Announcement,” presumably not his real name—is apparently extraordinarily happy in his work. “I like my job as a mod,” he said. He loves it so much he does it for free, he added, because he really doesn’t need the money. “I’ve gotten more than enough from the buyback,” he said. “The bonus received upon participation has kept me in huge profit.”

Admittedly, some of the bots do provide a decent simulacra of conversation—especially if you’re habituated to the wan panegyrics of crypto bagholders.

“I love how everyone here engages in conversations as well as promoting the good news about the lovely project,” reads one message on a Telegram group for the cryptocurrency Harmony One—to a chorus of automated identikit responses, each affirming the value of a worthless coin.