Cryptocurrency market maker Cumberland has said that institutional investors are betting on the second-largest cryptocurrency by market capitalization, Ethereum ($ETH), at a time in which the cryptocurrency’s price has been surging to outperform the wider market.

According to a Twitter thread attributed to Cumberland’s head of trading Johan Van Bourg, despite a recent pullback seen in Ethereum’s price, the cryptocurrency’s uptrend remains intact. Per Cumberland, while ETH’s price action has been technical and highly macro-correlated in the recent past, its recent move has been “crypto-fundamental.”

The market maker pointed to the Sepolia testnet successful merging to Proof-of-Stake on July 6, which set the stage “for an early-autumn mainnet merge.” The Ethereum Merge describes the network’s current mainnet merging with the Beacon Chain’s PoS system, setting the stage for future scaling upgrades, including sharding. The move is expected to reduce Ethereum’s energy consumption by 99.95%.

Tim Beiko, an Ethereum protocol support engineer at the Ethereum Foundation, made a projection for the Merge to occur in September at a PoS Implementers Call. Beiko has noted that the Merge timeline is very likely to change over time.

Cumberland added that barring any technical problems, the “emergence of a yield-bearing, deflationary, mega-cap asset is a very big deal” and noted that Ethereum’s move also “matters to the participants who care about climate change.”

Per the firm, portfolio allocations to Ethereum are “hardly oversubscribed” and it “doesn’t take much flow to move the needle.” That flow, it added, is being observed at its over-the-counter (OTC) trading desk, with buy/sell ratios tilting long.

Furthermore, portfolio allocation to ETH is hardly oversubscribed at the moment, so it doesn’t take much flow to move the needle. We’re seeing that flow through our OTC desk and via API: buy/sell ratios have tilted long over the last week, and the buyers have been institutional.

The market maker added the shift reflects that it’s “always easier to buy a bounce than to catch the falling knife” and while volatility can “be off-putting” it’s “not without justification” as Ethereum is a world computer and global settlement layer “with tremendous potential.”

Cumberland’s comments come at a time in which Ethereum whales have started accumulating more of the cryptocurrency as its price surged over the past week, partly thanks to the projection for the date in which the blockchain will undergo the Merge.

Ethereum’s price surged over 50% over the last 30 days to outperform the flagship cryptocurrency Bitcoin, which moved up around 16%, according to CryptoCompare data. 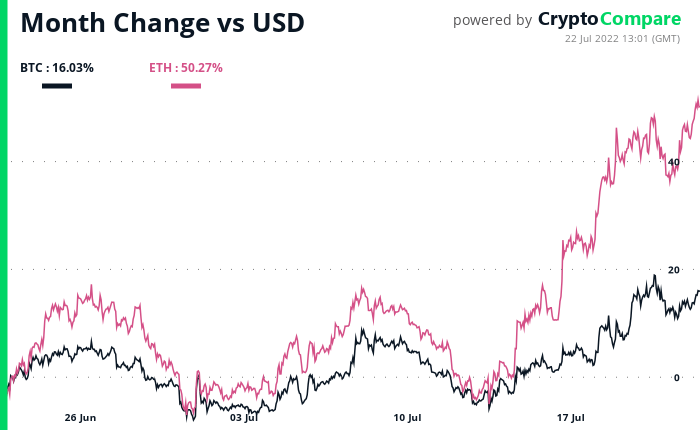 According to on-chain analytics firm IntoTheBlock, as Ethereum’s price moved up from around $1,050 to over $1,600 at the time of writing, ETH whales picked up their accumulation pace, to now hold over 22.4% of the cryptocurrency’s circulating supply.

Notably, Ethereum moving to $1,500 was in line with a prediction made by veteran cryptocurrency trader and market analyst Michaël van de Poppe, who predicted earlier this month Ethereum could see a “significant run” if it broke through its resistance at $1,140.

Meanwhile, a panel of 53 fintech experts at Finder revealed bullish price predictions for the future of the cryptocurrency, putting a $1,711 price target for the end of the year on average, and predicting a rise to $5,739 by the end of 2025. By the end of 2030, the experts predicted Ethereum could rise as high as $14,412.