IoTeX is not your regular blockchain offering a host of digital services. Rather, it realizes the perception that blockchain can transform how machines interact with each other. In simple words, IoTeX allows blockchain technology to work on your machines and is not just limited to software. It is amongst the very few blockchain technologies that one can easily integrate into their personal life.

In the current timeline where installing door cams, smart cameras, laptops, interconnected refrigerators, and air conditioners are an easy tool; hackers can easily hack your WiFi network and gain access to these digital machines. It marks a major question on what one can do to prevent hacking of IoT devices and has become the core subject of the IoTeX blockchain.

IoTeX uses a delegated Proof of Stake validation mechanism and has even invented Proof of Presence for its Pebble product. Originally developed as an ERC-20 token in 2017, it developed its blockchain in 2018 and included features such as staking.

IOTX token currently has a market capitalization of $317,788,723 with a supply of 9.54 Billion tokens. IOTX attained its all-time high value of $0.2611 in November 2021 and currently trades at an 87% discount to this value. The growth of the IoT ecosystem will immensely benefit this blockchain and its growth prospects.

After jumping significantly from its June 2022 lows, IoTeX hasn’t been able to escape the realm of profit booking. The sudden jump for this week has already been lost to profit booking by the buyers who entered at lower valuations. 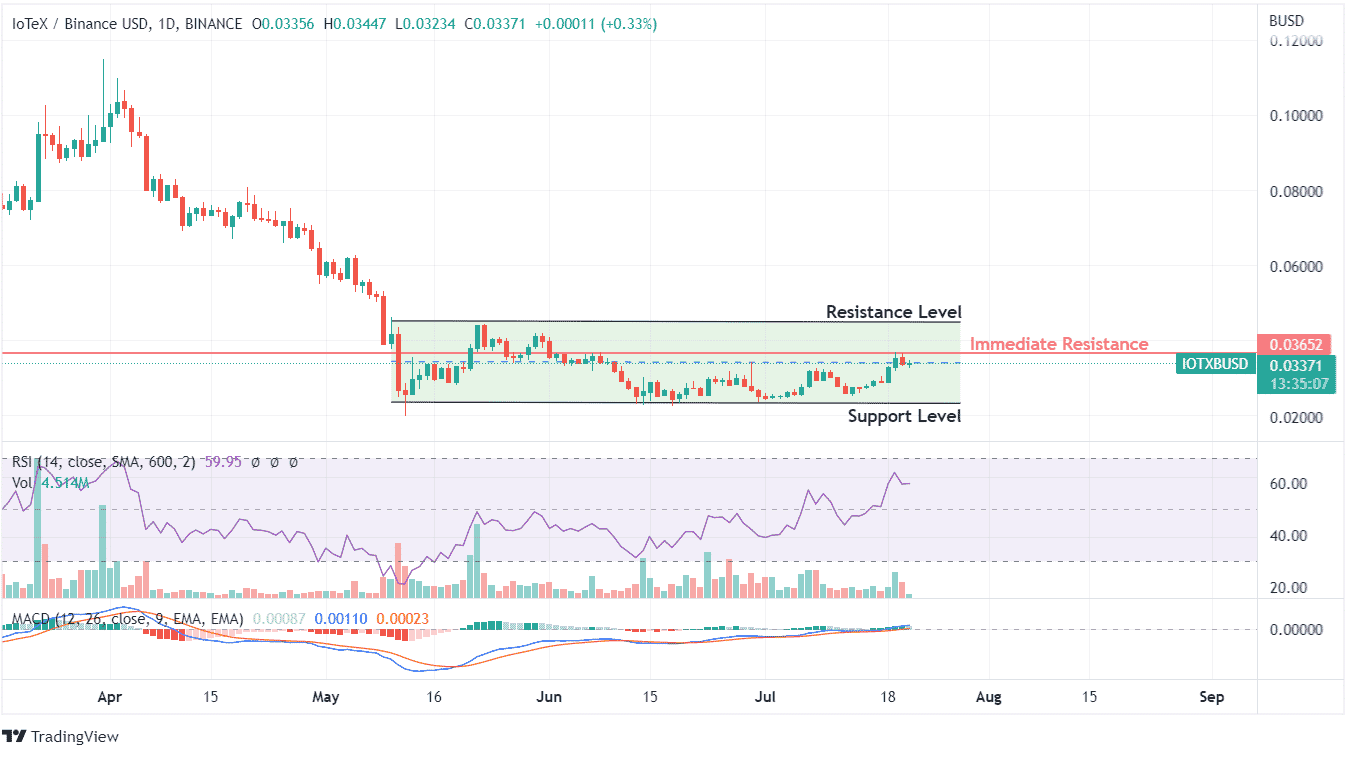 The price action of IOTX indicates a consolidative price action that hasn’t been able to reach the first rejection level of May 2022. As such, buyers are not allowing the prices to beach resistance zones because of a profit booking mindset.

The RSI levels have increased from oversold zones of 20 during May 2022, it has now entered a level of 59, but the impact of this buying sentiment isn’t reflected in the price action. The MACD line and Signal line has been trading close to each other since mid-May. All these aspects highlight the critical element of higher buying despite a lower price hike.

With the present rally having created upper wicks on July 19, it became evident that a selling zone turned into resistance. The same evident fact was confirmed on July 20, but the formation of three inside-down candles has signified a negative stance. If the price action of July 21 could close the candle above the opening value of the previous day, the candlesticks would indicate a buying side scenario.

RSI indicator has turned sideways for the day, and the direction of its continual combined with breaching the $0.3652 level will ensure a positive rally. Failure to mark such a bullish stance could force IOTX to enter a profit booking scenario with a higher probability of testing the immediate support level at $0.2300.