The masterminds behind the alleged cryptocurrency Ponzi scheme called Bitstream Circle are believed to have stolen more than $10 million in investor funds. The alleged theft became apparent on March 13, 2022, when some of the scheme’s investors encountered problems making withdrawals.

Reports from Kenya have said investors in an alleged crypto Ponzi scheme, Bitstream Circle, are now unable to withdraw funds following the scheme’s collapse. The reports add that the scheme’s masterminds may have made off with investors’ digital assets that are worth over $10 million.

According to one report, the alleged Ponzi scheme was registered in the U.K. in November 2021 as Bitstream Circle Limited, and Chinese national Quin Yang is listed as the director. The report adds that the scheme had amassed over 11,000 members from across seven countries in less than four months. Most victims were apparently lured by the promise of a daily return on investment of between 5% and 8%, the report suggested.

Fresh reports that Kenyans may have lost millions to yet another cryptocurrency scheme come shortly after a Kenyan government official claimed $120 million had been lost to similar scams in the past financial year. While many of the scheme’s investors now see Bitstream Circle as a scam, the platform’s early investors initially dismissed these allegations.

However, as a report published by Kimani Capital on Linkedin explains, many investors, in fact, began experiencing problems withdrawing funds on March 13, 2022. A message from the administrator of Bitstream Circle’s telegram channel initially suggested that a network upgrade was the source of the problem. Yet after the so-called five-hour network upgrade was completed, investors could still not withdraw their funds.

The Lure of Sizeable, Quick Returns

Meanwhile, in a bid to back claims scammers may have stolen millions from unsuspecting investors, authors of a report published by Kimani Capital point to the more than 10 million USDT stablecoins that were received by an address allegedly controlled by the scammers. 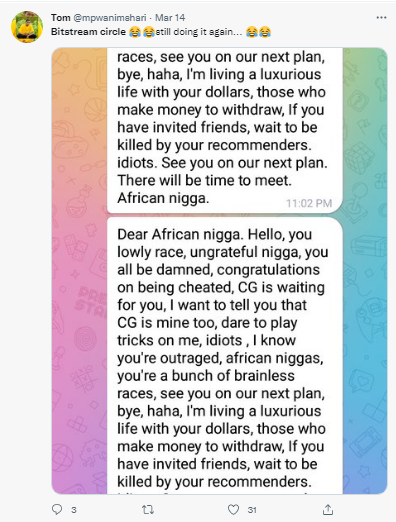 On Twitter, users have been sharing a screenshot purporting to show one of the masterminds mocking the victims. Other users lamented how young investors in particular continue to be duped by the promise of very high returns in a very short space of time.