Home Articles LTC faces yet another rejection at $60, slides down to $52 support

Litecoin price analysis continues to be severely bearish following on from yesterday’s decline. LTC price lowered more than 7 percent over the past 24 hours to move as low as $52.66, with further downward action expected. Litecoin has faced multiple rejections around the $60 mark over the past month, with the latest retestment pulling price down almost 12 percent in 2 days. LTC bulls enjoyed a favourable start to the week as price jumped up to $59.70 on July 26, 2022. This was following a largely bullish period that began on July 13 with price at $46.65. Over the next 24 hours, LTC is expected to remain bearish with a revisit of the $50 mark.

The larger cryptocurrency market crashed further over the past 24 hours, as Bitcoin dropped below the crucial $21,000 mark with a 5 percent decline. Ethereum followed suit, dropping a significant 10 percent to move as low as $1,300. Among leading Altcoins, Cardano dropped 7 percent to $0.457, and Ripple 5 percent to $0.32. Meanwhile, Dogecoin lost 6 percent in price to lower down to $0.06 and Solana dropped 9 percent to $35.29. Polkadot also continued its extended bearish run, dropping 7 percent to $6.58.

On the 24-hour candlestick chart for Litecoin price analysis, price can be seen facing a severe downturn over the past 48 hours which has receded progress made over the weekend. Major technical indicators have turned bearish, with price facing an uphill battle to stay above $50 support. LTC price can be seen dropping below the 9 and 21-day moving averages on the daily chart, along with a move beneath the crucial 50-day exponential moving average (EMA) at $55.10. 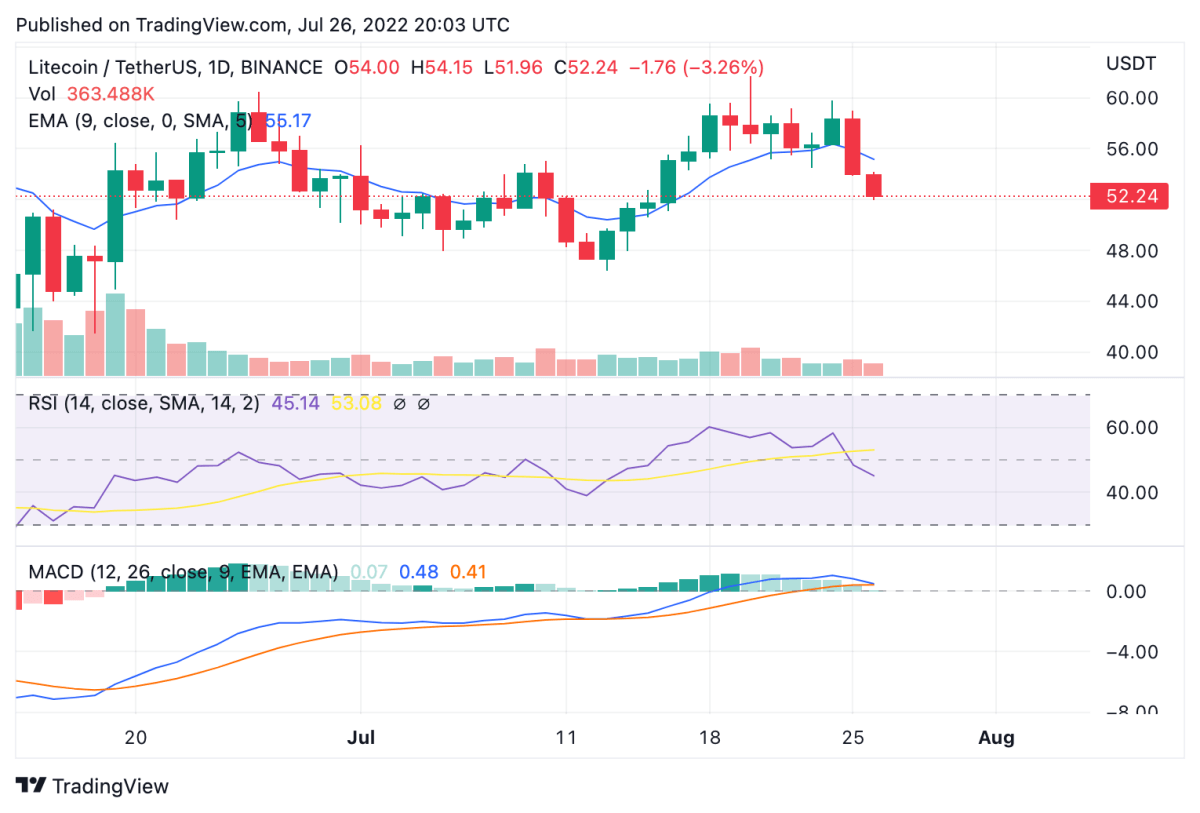 The 24-hour relative strength index (RSI) also presents a bearish scenario after dropping down to 45.14 after moving up to 58.23 on July 24, 2022. Trading volume has also taken a downturn over the past 24 hours, presenting further bearish evidence for LTC. Meanwhile, the moving average convergence divergence (MACD) curve can also currently be seen attempting a bearish divergence with formation of lower lows.