Home Articles MATIC set to regain strength to move towards $1.20

Polygon price analysis is bullish again, after price rose more than 7 percent over the past 24 hours to move as high as $0.8946. MATIC had been in a horizontal channel since July 20, 2022, after initially forming a significant uptrend to move up to $0.98 on July 18. At the start of the sideways pattern, it was expected that seller pressure could recede price down to $0.58 as the coin approached support at $0.77. However, Polygon price has bounced back bullishly to reignite potential for MATIC to move up to $1.20 in the next uptrend. According to bullish technical indicators, price could reach as high as $0.98 over the next 24 hours.

The larger cryptocurrency market also shows bullish signs to mimic Polygon’s uptrend, led by Bitcoin’s move up to $23,000 with a 3 percent increase. Ethereum follows suit, rising 7 percent to move up to $1,600, whereas leading Altcoins also show strength across the board. Cardano made a significant jump worth 9 percent today to move as high as $0.52, while Ripple moved up to $0.36 with a 3 percent increment. Dogecoin also rose 3 percent up to $0.06, the same as Solana’s move up to $41.06. Meanwhile, Polkadot jumped 4 percent to sit at $7.45.

On the 24-hour candlestick chart for Polygon price analysis, price can be seen underway to begin another ascent after an extended period sideways. MATIC price had been in decline since July 19, 2022, after initially undergoing a massive 80 percent increment in the previous week. Price rose as high as $0.98 back then, then falling back into a rectangular pattern between $0.85 and $0.90. Over the past 24 hours, Polygon price amassed over 7 percent to move as high as $0.90, as price rose above the crucial 50-day exponential moving average (EMA) at $0.84 in the process. 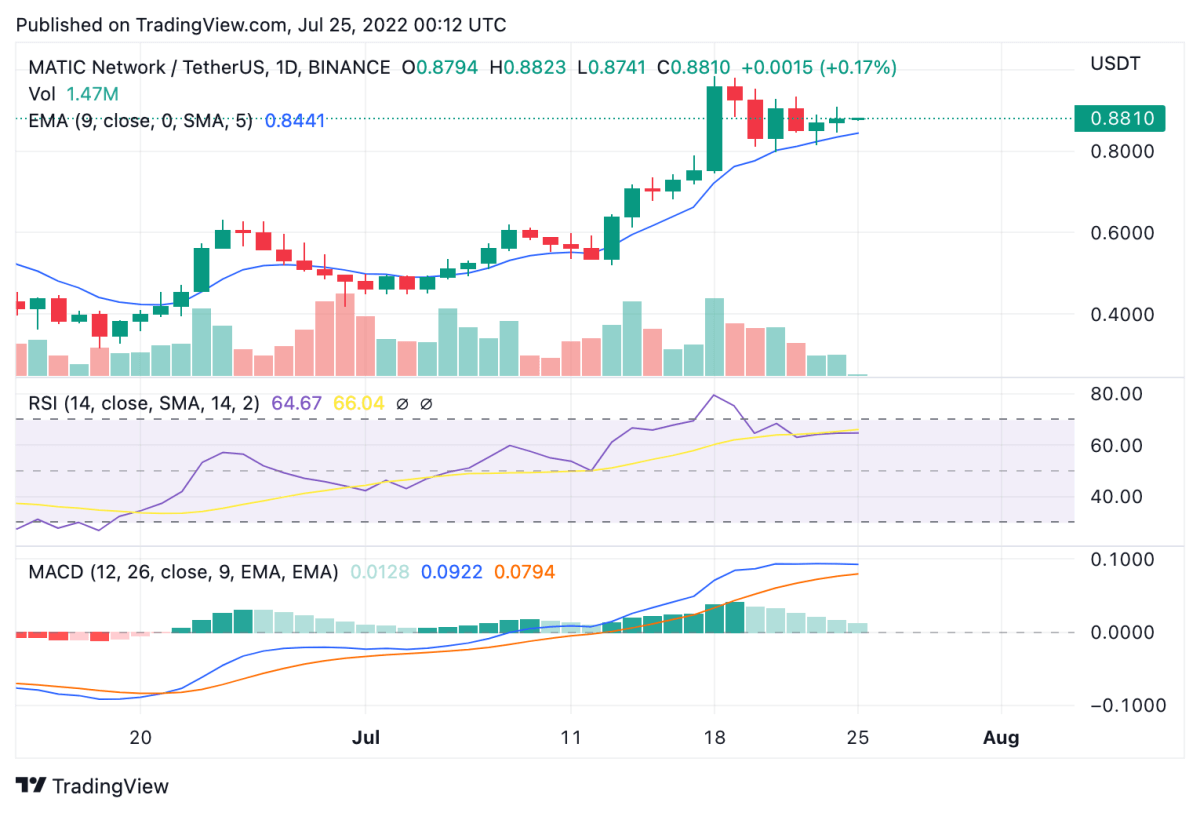 However, the 24-hour relative strength index (RSI) presents a problematic view after jumping into deep overbought territory at 64.56. Trading volume also jumped more than 5 percent over the past 24 hours, suggesting it may be time for a correction in price. Meanwhile, the moving average convergence divergence (MACD) curve can be seen forming lower highs above the neutral zone, and a bearish divergence is expected over the coming trading sessions.