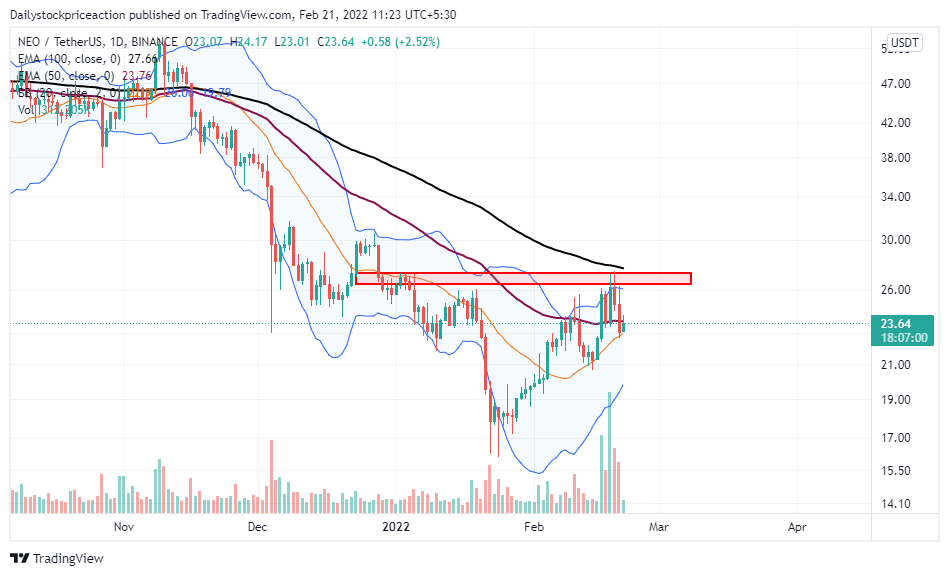 NEO coin price was trading in a downward parallel channel from past trading weeks.The coin is forming lower low and lower high formation on daily time frame.Recently, the coin faced rejection at the long term supply zone of $26.5.At present, the coin is trading below all the vital Exponential Moving Average (20, 50, 100), which can act as a resistance moving upwards.The coin recently gave a breakout of 20 EMA but could not sustain above it due to selling pressure over the last week in overall cryptocurrency market.NEO coin price after facing rejection at the upper band of the bollinger band indicator is now trading in the middle of it.The coin has formed big bearish candle at the long term supply zone, thus resulting in the fall of digital asset’s price.Volumes increased during the breakout phase but it was not enough as the bears immediately took the control and pushed the price down below breakout level. 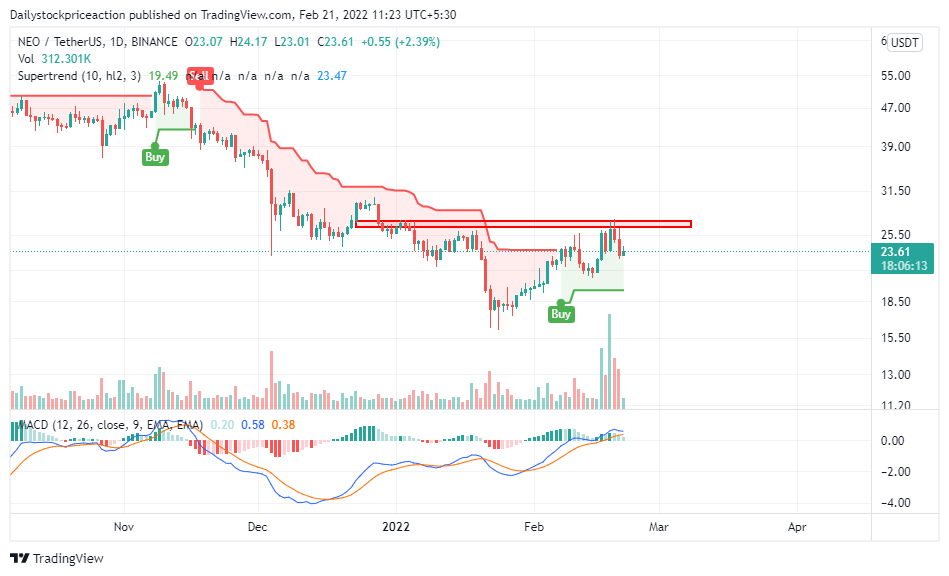 NEO coin price, as per the technical parameters is looking bullish as the coin recently gave breakout of 20 EMA.

Moving Average Convergence Divergence (Bullish): MACD indicates a bullish trend on the daily time frame as it gave a positive crossover. The buyer’s (blue) signal line crossed the seller’s (orange) on the upside. If the coin bounces off the 20 EMA, the coin token price could reach up to$31 and if it fails to hold at current level then the price can be seen falling down to $19.5. MACD is trading at the top and thus a little selling pressure could trigger a negative crossover,which will result in the coin moving into bearish trend for upcoming trading days.

NEO coin price was consolidating in a small range from the past week and it has resulted in the formation of an ascending triangle pattern on daily time frame.The red supply zone will act as a strong resistance moving upwards. If the bulls are able to strom through it, then the coin can be seen moving high up to $31.

Relative Strength Indicator: RSI is trading at 52.51 after the coin faced rejection and fell. The RSI curve is slowly moving upwards as the coin moves.recent bearishness led to fall in coin which has resulted in the RSI curve crossing the 20 SMA on the downside and thus if the coin does bounces of the red trendline then, it can be seen falling down in the upcoming trading days.

Average Directional Movement Index: ADX has been continuously dipping from the past trading days, and recently, it slipped below 25, as the token faced rejection at $9.49.The ADX curve has now halted and turned sideways indicating a possible halt in the movement of the price and change in structure of the digital asset.

CONCLUSION; NEO coin price is trading in a range and breakout on either side will trigger big moves.Technical parameters are neutral as the short term trend is indecisive.It remains to see if the coin breaks the long term supply zone of $26.5 or breaks down the lower trendline and fall down to $19.5