Sometimes, tweets published by Tesla chief Elon Musk prove how eccentric the wealthiest man in the world, dreaming of extending human life to Mars, can get.

This time, his tweet has left the Twitter community and crypto enthusiasts wondering again what this man, who invented PayPal, founded SpaceX and Starlink and brought Tesla to its current heights, is thinking.

Elon Musk has posted a letter that looks very similar to “h,” but it has a horizontal line in the upper part.

A tweet that followed the one about “h” stated that “tau > pi,” referring to numbers.

Questions started flowing in immediately as to what this stands for. A major Shiba Inu account, @ShibaInuHodler, jokingly wondered if that was for “Shib”. Huobi Global asked if Elon Musk had its name in mind. 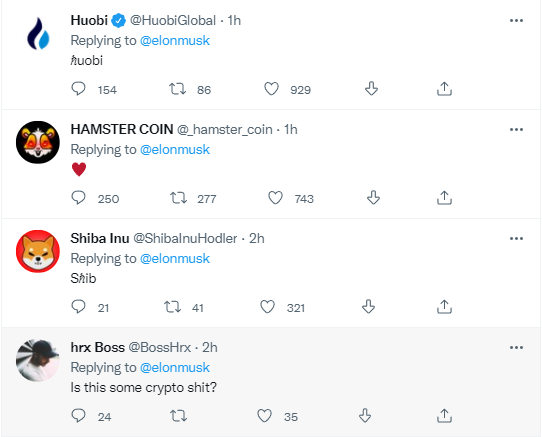 On Jan. 15, Musk also tweeted something that puzzled the crypto community and other followers of his. It was an emoji with the number 100 and an arrow pointing upwards. Later on, some expressed a view that it referred to the growth of Tesla shares.

In December 2021, the boss of Tesla announced that the e-car producing behemoth would start an experiment in accepting Dogecoin for some of its merchandise in Tesla’s online shop – to see “how it goes.”

The next step was Musk hinting that SpaceX and Starlink may accept DOGE for their services too.

Over the weekend, prominent Dogecoin fan Musk announced that Tesla is planning to build a “futuristic diner/drive in theatre” in the Hollywood area where “of course you can pay in DOGE,” according to Elon’s tweet.

Recently, a new Tesla charging station was opened in that area – in Santa Monica. The Dogecoin price did not react to that news, however.