Bitcoin has once again cleared expectations for the month of October. The price of the digital asset had grown from its $40K lows to over $57K at the time of this writing. Its recovery trends have put it on a path of least resistance towards the previous $64K all-time high. But on-chain metrics have shown even more favorable trends among investors in the asset.

Bitcoin Active Entities (i.e number of active users on the blockchain each day) paints a bullish picture for the asset going forward. This metric had dropped between May and September 2021, nearing lows seen in January 2020 when the bear market was still in full force. However, there has been a significant uptick in the number of Active Entities on the blockchain following the bull rally started at the beginning of October.

Data from Glassnode shows that bitcoin Active Entities have seen an increase in recent weeks. At its lowest, Active Entities dropped to a little over 200K this year, down over 50% from its high of over 400K between January and February 2021. As the price of the asset has begun to soar again, so has the number of Active Entities.

The significance of this shows in the movement of the price. The last time Active Entities saw a significant uptick, the market had seen a bull rally that put the digital asset on a path to new all-time highs. While the increase in Active Entities may not be significant this time around, it may still carry the same connotations for the market. 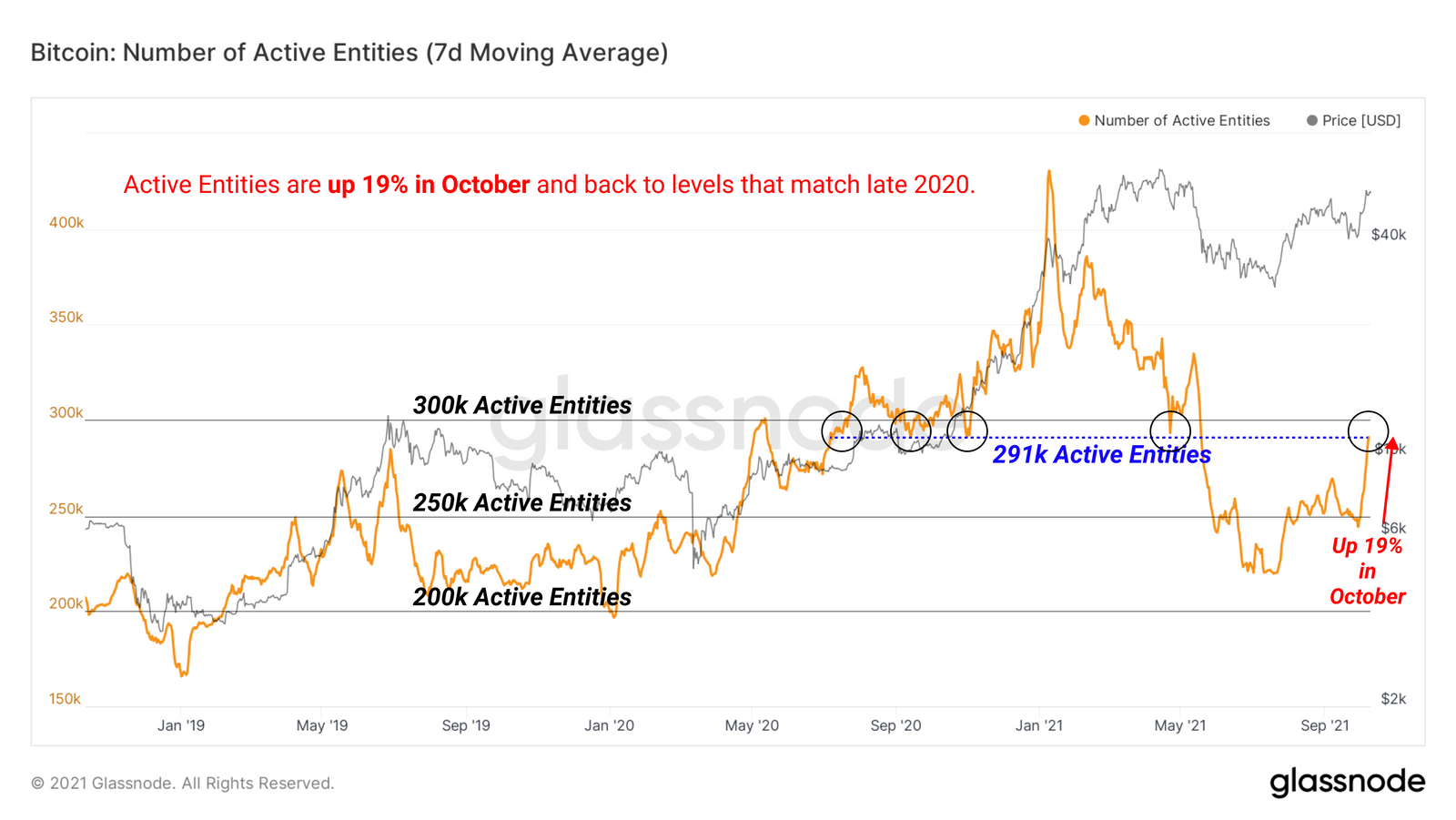 If history is anything to go by, then the increase in Active Entities signifies renewed interest in the market. And one thing that has always preceded a bull run has been returning interest, which often marks the beginning of a long bull rally.

Active Entities is not the only metric that recorded an increase. In the same report, Glassnode outlines that the average amount of bitcoin being transacted is on the rise. The median transaction size on the blockchain grew to 1.3 BTC, nearing the 1.6 BTC levels that were seen with the liquidity crash of March 2020.

Like Active Entities, one metric cannot alone determine how much the price of an asset will appreciate or depreciate. But as the report notes, the increase in the average transaction size shows an increased interest from institutional investors who have more money to put into the market.

If the median transaction size now sits at over 1.3 BTC, then the dollar value on these transactions is over $60K. This kind of money moving through the market shows inflows from wealthier investors, which could very well push the value of the digital asset higher. Although it is also important to note that institutional investors generally invest when the market is headed into a bear. So these accumulation patterns could represent the beginning of a bear when institutions begin to fill up their bags.