Polygon looks primed for a retracement after soaring in market value over the past month. Still, there is a massive area of support that may help its price hold.

Polygon appears to be preparing for a correction, but it has yet to break through a vital support cluster.

MATIC has enjoyed a rally over the past month. It surged by more than 200%, rising from a low of $0.32 to hitting a high of $0.98 on July 18. Given the significance of the upswing, it appears that the token is now trading in overbought territory.

The Tom DeMark (TD) Sequential indicator has presented a sell signal on MATIC’s daily chart. The bearish formation developed as a green nine candlestick, which is indicative of a one to four candlesticks correction. The pessimistic outlook was strengthened when the current red two candlesticks began to trade below the previous red one candlestick.

However, MATIC is holding above a significant support cluster represented by the Parabolic SAR, the 100-day moving average and the 78.6% Fibonacci retracement indicator at $0.77. A daily candlestick close below this critical interest zone could result in a spike in downward pressure, potentially leading to a 22% correction toward the 50-day moving average at $0.58. 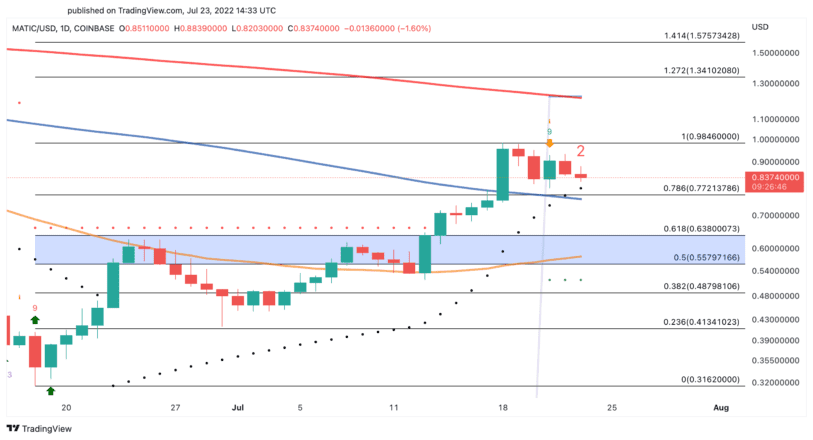 MATIC will likely need to break the July 18 high of $0.98 to invalidate the pessimistic outlook. Slicing through this vital resistance level could give it the strength to advance toward the 200-day moving average at $1.20.

Disclosure: At the time of writing, the author of this feature owned BTC and ETH.