Solana has reached a crucial resistance level as it attempts to catch up with other Layer 1 coins like Avalanche, which have surged by more than 35% in the past week. Several technical indicators suggest that SOL could be preparing to break out.

Solana Prepares to Break Out

Solana appears to be on the brink of breaking out as its price action flashes multiple bullish signals.

The Layer 1 network’s SOL token has seen its market value increase by more than 15% over the past week to test the $93 resistance level. This hurdle is significant to Solana because it sits around the descending trendline of a wedge that has been forming on its daily chart.

A decisive candlestick close above $93 could signal a breakout from the consolidation pattern. Under such circumstances, sidelined investors could re-enter the market, pushing Solana by roughly 34% toward $120.

It is worth noting that SOL’s price appears to be creating a bullish divergence against the Relative Strength Index within the same timeframe. While Solana makes a series of lower lows, the RSI has been making a series of higher highs. Such market behavior indicates rising upward momentum, adding credence to the optimistic outlook. 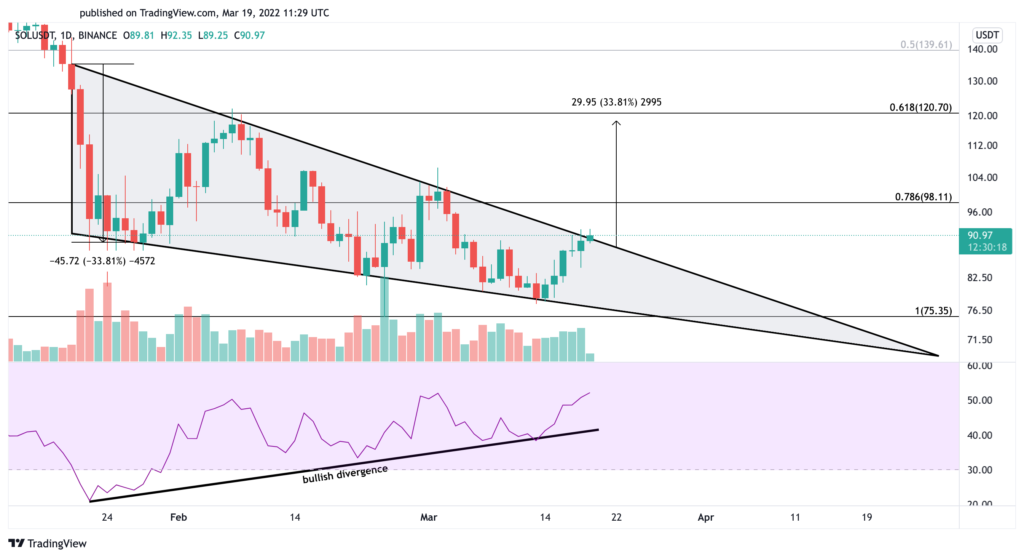 Still, Solana will likely need a sustained daily close above $93 to confirm the bullish thesis. If it fails to break this resistance level, the asset could suffer a correction to the wedge’s descending trendline at $75.

Disclosure: At the time of writing, the author of this piece owned BTC and ETH.