Home Articles Solana TVL and price drop 50%+ from ATH, but gaming DApps could turn the tables

2022 has not been a good start for cryptocurrencies and to date, the total market capitalization has dropped by 21% to $1.77 trillion. Solana’s (SOL) correction has been even more brutal, presenting a 48.5% correction year-to-date.

Solana leads the staking charts with $35 billion in value locked, which is equivalent to 74% of the SOL tokens in circulation. Multiple reasons can be identified for the underperformance, including four network outages in late 2021 and early 2022.

The latest incident on Jan. 7 was attributed to a distributed denial-of-service (DDoS) attack, causing Solana Lab developers to update the code and consequently reject these types of requests.

However, investors are more concerned about the centralization caused by the costs of being a Solana validator. To achieve 400 millisecond block times, the recommended hardware includes a 12 core 2.8GHz CPU, 256 GB memory, high-speed 1 TB SSD drives and a low-latency internet connection.

dApp use is on the decline

The chart above shows how Solana’s decentralized application (DApp) deposits saw a 50% decrease in three months as the indicator reached its lowest level since Sept. 8. As a comparison, Fantom’s TVL currently stands at $9.5 billion after doubling in three months. Another DApp scaling solution competitor, Terra (LUNA), saw an 87% TVL hike to $23.2 billion.

On the bright side, on Feb. 21, FTX.US, the American arm of the global crypto derivative and spot exchange FTX, announced a new blockchain gaming unit. It is also worth noting that Solana Ventures partnered with FTX and Lightspeed Venture on Nov. 5 to launch a $100 million fund dedicated to the sector.

To confirm whether this drop in TVL should be concerning, one should analyze DApp usage metrics. Some DApps are not financially intensive, so the value deposited is irrelevant. 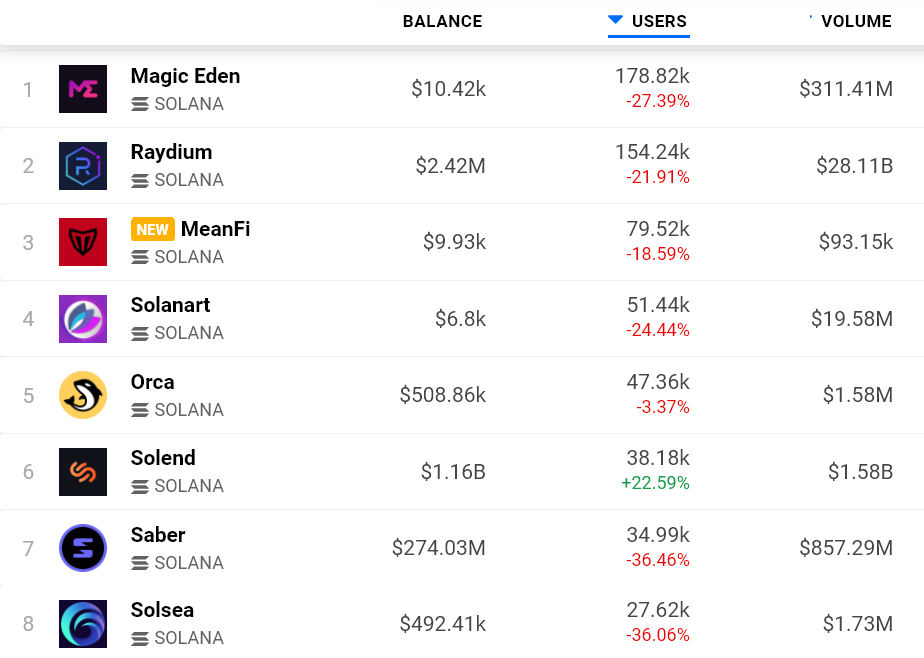 As shown by DappRadar data, on Jan. 28 the number of Solana network addresses interacting with decentralized applications dropped by 18% on average. The only positive change was Solend, an algorithmic lending protocol.

The decreased interest in Solana DApps was also reflected in its futures open interest, which peaked at $2 billion on Nov. 6 and was recently hit with a steep correction.

The gaming sector could be a surprise factor

Even though Solana has been hit the hardest compared to similar smart contract platforms, there is solid network use on non-fungible tokens (NFT) marketplaces, as measured by Magic Eden’s 178,820 active addresses in the last 30 days.

Moreover, Solana Ventures’ bet on the gaming sector could further showcase the network’s processing capacity. For instance, games represent half of the top 10 DApps across every blockchain covered by DappRadar. That includes Splinterlands, which has 578,280 active addresses and Alien Worlds which has 544,900.

The above data suggests that Solana is losing ground versus competing chains, but holders are not concerned because 74% of the coins are still locked in staking. As long as Solana Labs’ partnerships and investments continue to show potential, there is little reason to be bearish on SOL.