One of the biggest decentralized exchanges (DEXs) in the ETH ecosystem, SushiSwap recorded a plunge in its volume in July. It is due to the decreased demand of some altcoins that are listed on DEXs. 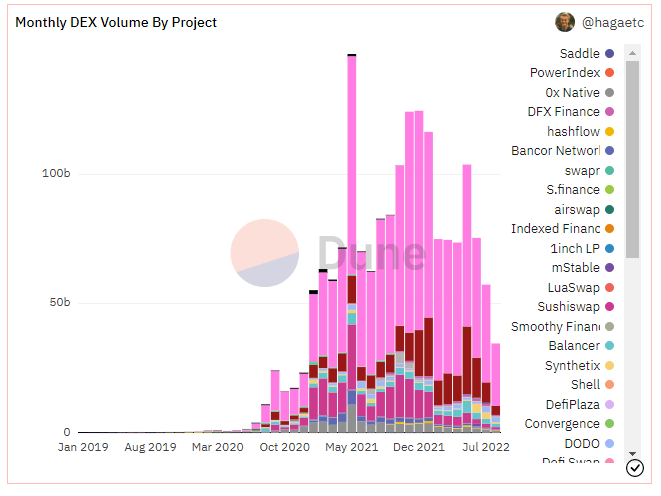 By resting at the new low, Sushiswap noted its year-by-year drop in trading volume by around 72% from last year in July. In July 2021 the trading volume of SushiSwap was $5.65 billion. Furthermore, the latest metrics were at $8.36 billion below volume, from the yearly high of $9.89 billion in January.

The current crypto market downfall trend, which increased in July, impacted negatively on SushiSwap. It is noted due to the exchange supporting low-cap digital assets leads to lower trading volumes.

Besides SushiSwap, the other record volume DEXs like Uniswap, DODO, Curve, Balancer, and Synthetix also dive to their new low.

On July 1, SushiSwap opened with a trading price of $0.96. Its monthly high reached $1.64 and noted its monthly low at $0.94. At the end of July, its price was $1.50. The difference between the opening and closing price of SUSHI noted around a 46% increase in July.