Home Articles Terra price gains 75% in February as $2.57B in LUNA tokens removed from supply

Terra (LUNA) emerged as one of the best performing financial assets in February, a month mired by geopolitical conflicts and their negative impacts on the crypto market.

LUNA decouples from the crypto market

LUNA’s price surged by a little over 75% to reach $91.50 at the month’s UTC close. In comparison, the percentage performance of other top tokens, mainly Bitcoin (BTC) and Ether (ETH), in the same period came out to be around 12.25% and 9%, respectively. 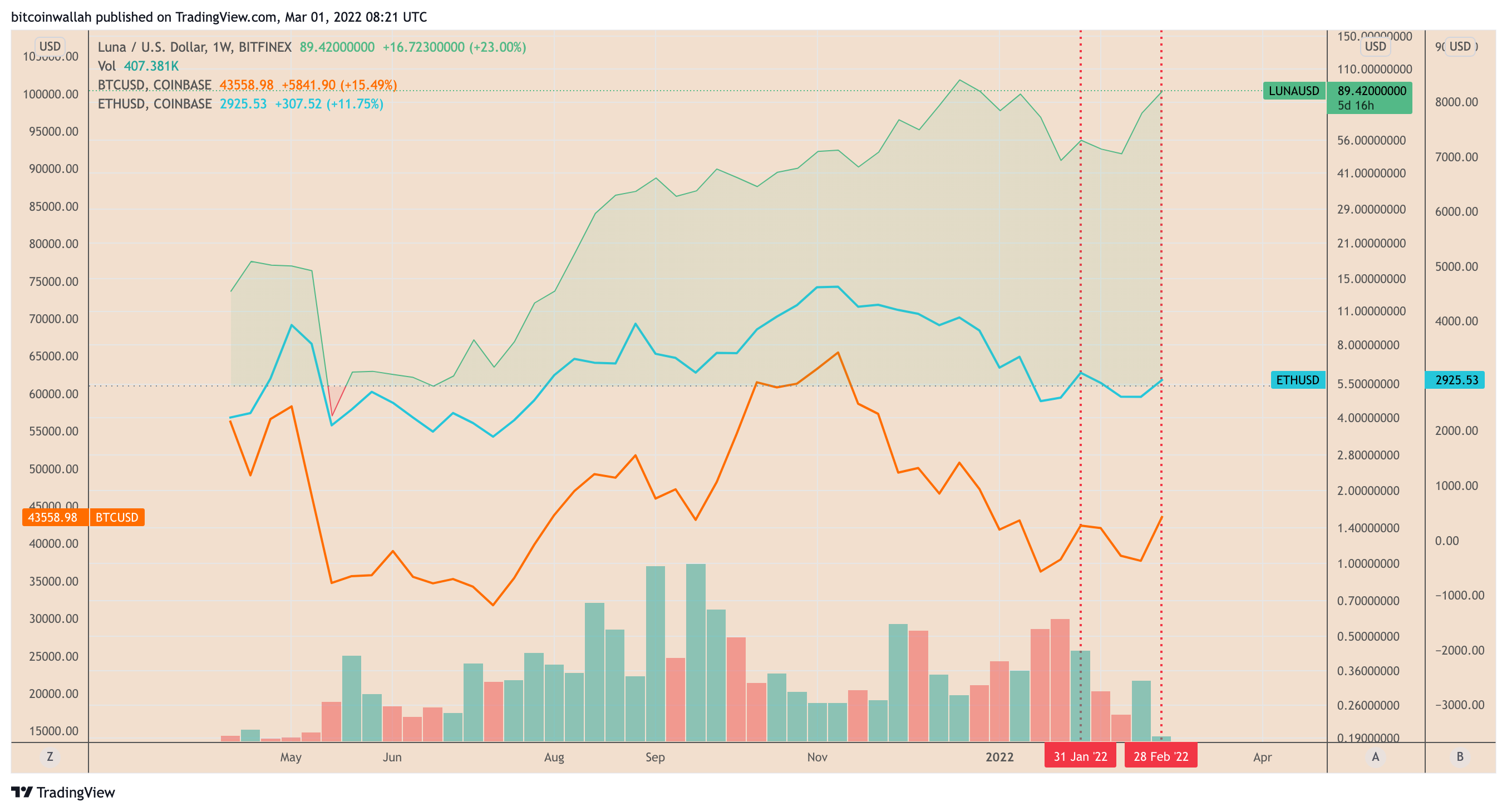 Interestingly, most of LUNA’s gains in February surfaced on the month’s last day. The Terra token jumped 26% on Feb. 28, in part due to similar upside moves elsewhere in the crypto market. For instance, BTC and ETH rose 14.50% and over 11.50%, respectively, on the same day.

While still positive at 0.09, LUNA’s correlation with Bitcoin has come off lately after hitting 0.81 on Feb. 21, data from TradingView shows. A correlation of 1 means that two assets are in lockstep, while 0 shows that their price moves independently.

In detail, the LUNA/BTC pair rose by over 56% to 21,171 satoshis in February, suggesting traders sought hedge in the Terra token as Bitcoin’s correlation with a bearish stock market grew, reaching 0.70 earlier this year. 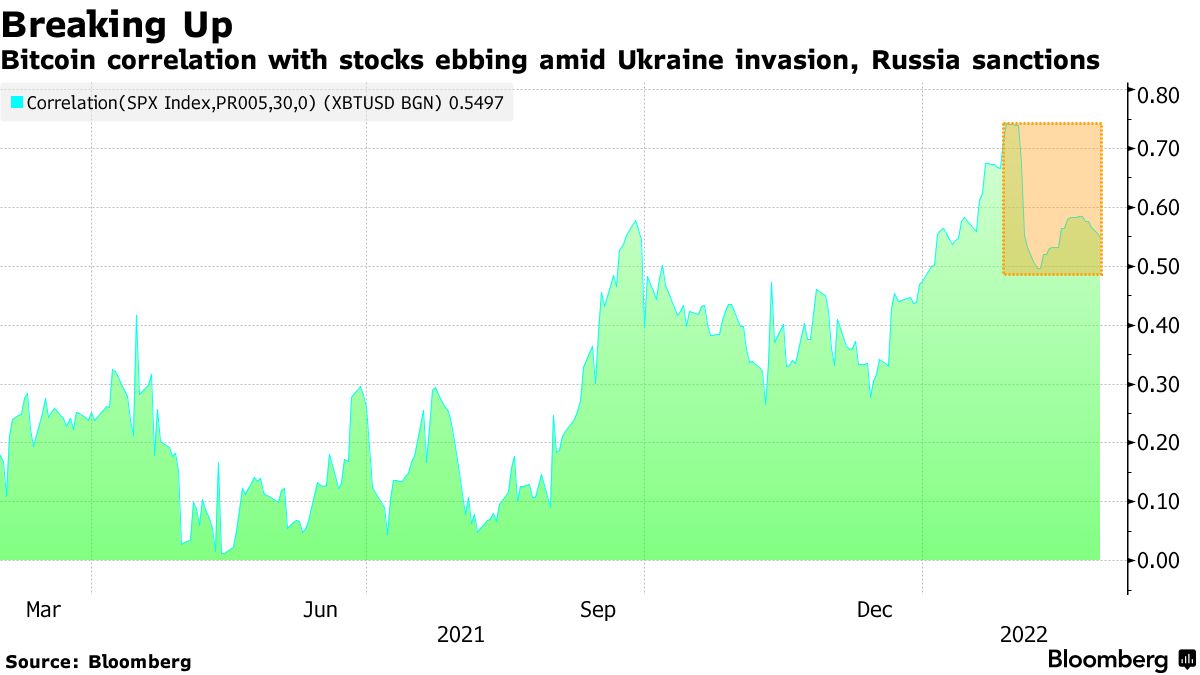 As to why traders appeared to have considered LUNA as their interim safe haven in the first place, the answer might lie in Terra’s token economics.

Data fetched by analytics platform Smart Stake showed that Terra protocol burned 29 million LUNA tokens worth $2.57 billion recently. That happened as the supply of TerraUSD (UST), a stablecoin backed not by the U.S. dollar but LUNA, increased from around 11.26 million on Feb. 1 to almost 12.92 million on Feb. 28, marking an increase of nearly 14.75%. 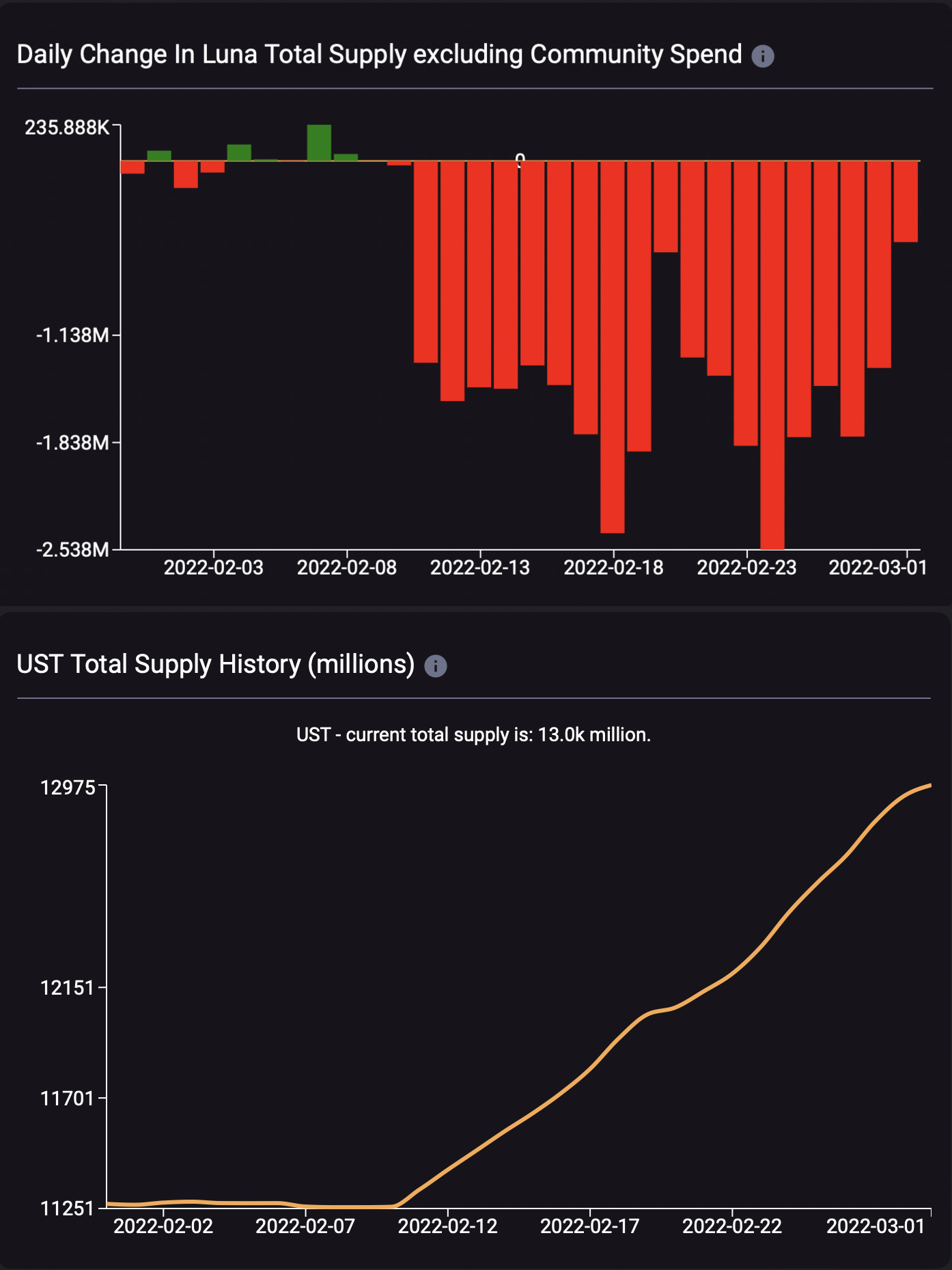 LUNA and UST supply all across February 2022. Source: Smart Stake

Traders consider an increasing UST supply a bullish catalyst for LUNA, mainly because of the so-called UST-LUNA token model. In detail, Terra preserves UST’s peg of USD through an elastic monetary policy. So when the value of UST goes above $1, Terra incentivizes its users to burn LUNA and mint UST.

But when the UST supply contracts, LUNA valuation decreases due to a slowdown in the burning mechanism. All and all, LUNA’s valuation tends to rise alongside UST’s supply.

On Feb. 22, the Luna Foundation Guard (LFG) — a nonprofit organization supporting the Terra blockchain ecosystem, announced that it had raised $1 billion in a LUNA token sale round led by Three Arrows Capital, a venture capital firm backed by Ethereum-skeptic Su Zhu and Jump Crypto, a trading group known for assisting Solana’s cross bridge platform Wormhole in replenishing their stolen $300 million.

LFG revealed that it would use the proceeds to build a “UST Forex Reserve,” raising prospects of boosting the stablecoin’s supply by another billion-dollar worth of LUNA-backed tokens.

LUNA’s price has risen by nearly over 90% since the LFG’s announcement. In contrast, the total market capitalization of all the cryptocurrencies combined has rallied by just 13% in the same period, underscoring that crypto traders have been flocking into the Terra market.

What’s ahead for LUNA?

Bull flags are bullish continuation patterns that appear when the price consolidates lower inside a descending channel after a strong move upward. Eventually, it breaks out of the channel range to the upside, with a price target ideally at length equal to the size of the upside move that preceded the bull flag formation.

LUNA appears to have entered the final phase its bull flag setup, as shown in the chart below. It now eyes a run-up toward $120, an all-time high for Terra if achieved.

Additionally, LUNA’s daily relative strength indicator (RSI) has been flashing an “overbought” warning, noting that it could go a degree of price correction in the coming sessions.

Nonetheless, in the long term, the Terra token’s path of least resistance remain to the upside, with its year-over-year performance against the dollar coming out to be over 1,200% as of Feb. 28, 2022.

The views and opinions expressed here are solely those of the author and do not necessarily reflect the views of Cointelegraph.com. Every investment and trading move involves risk, you should conduct your own research when making a decision.