Home Articles The biggest crypto stories in the week ahead

As we head into the last full week of August, despite much of the world being on holiday, the unsleeping crypto market may serve up yet more surprises.

While it’s hard to imagine what might happen next in crypto, here are the stories we expect to set tongues wagging — from Tornado Cash developments to earnings updates.

The next chapter for Tornado Cash

This weekend, The Block’s Tim Copeland reported that privacy advocates and family of the arrested Tornado Cash developer Alexey Pertsev protested in Amsterdam.

Amid protests, a decentralized autonomous organization (DAO) associated with the sanctioned crypto mixer had been discussing ways in which it might challenge the US sanctions in the wake of the arrests before its governance forum was taken down.

The coming weeks will pose a test for the legal parameters placed around code, in a case that is likely to set precedents for the industry on multiple levels.

All eyes on prices

Bitcoin (BTC) and ethereum (ETH) experienced their famed volatility over the weekend, with bitcoin once again hovering around $21,000 and ether flirting with the $1,600 mark on Sunday.

Risk-off behavior will be something to watch for as the US reports an updated GDP reading and some economists anticipate a technical recession.

A new chapter of the Galaxy-BitGo saga

Has Galaxy Digital bitten off more than it can chew? We may see new developments after the unceremonious cancellation of the proposed $1.2 billion Galaxy-BitGo merger.

Last week saw Galaxy call off the tie-up and state that no termination fee was payable. Later that day, Galaxy begged to differ.

In a statement shared with The Block, BitGo said it “intends to take legal action against Galaxy Digital for its improper decision to terminate the merger agreement with BitGo, which was not scheduled to expire until December 31, 2022, at the earliest and to not pay the $100 million reverse break fee it had promised back in March 2022 in order to induce BitGo to extend the merger agreement.” 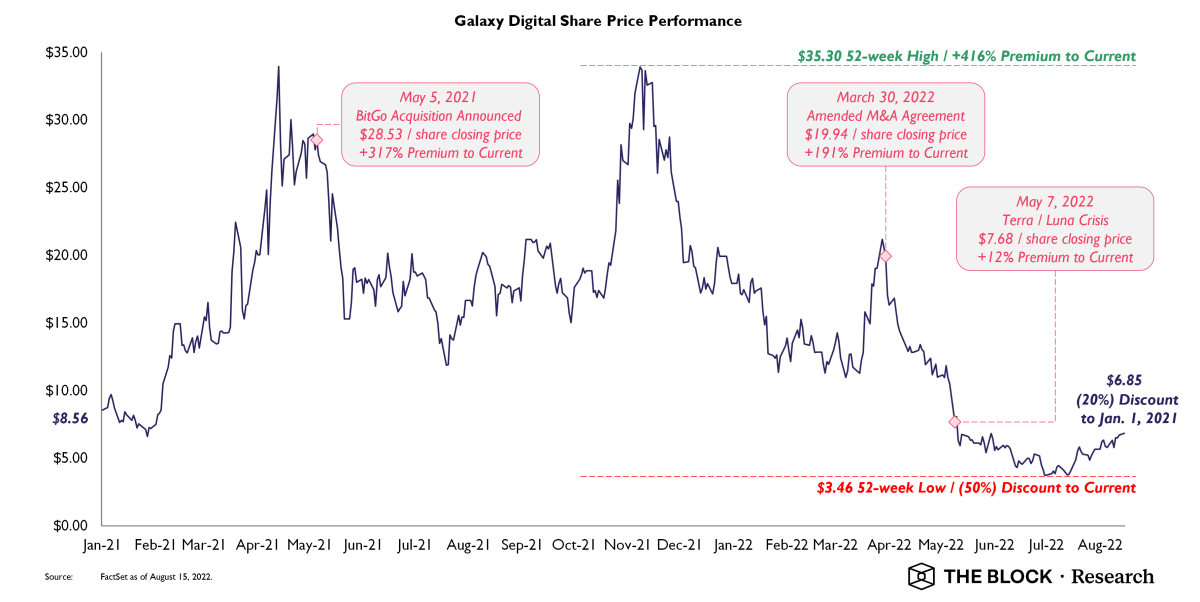 Many questions remain as to what the way forward may look like for the pair. The Block Research’s Greg Lim asks: “With the broader market in a slump and the deal not closing, will BitGo be required to raise additional capital at a down valuation?”

Despite a quiet docket in terms of earnings updates, we can expect a second-quarter report from bitcoin miner Iris Energy on Wednesday. The company had doubled its hash rate to 2.3 exahash per second (EH/s) earlier in August, after completing phase two of its Mackenzie site in Canada.

Chip maker Nvidia is also set to report for Q2 on Wednesday.

Michael Burry Warns Of “Permanent Decline” In A Dire Warning