Home Articles the Winners and Losers So Far

High geopolitical risk has been shown to increase investors’ uncertainty, prompting declines in stock prices and other financial assets. The link with stock market uncertainty is particularly clear in the graph below, which compares the GPR to the VIX indicator of stock market volatility, which is sometimes referred to as the “investors’ fear gauge”.

The GPR daily is in orange, while there are two other versions that track risk of threat (red) and geopolitical acts (green). Essentially they have all been moving in the same direction, with the red risk line leading the way. As you can see, both these lines and the VIX rose in November after satellite imagery first showed build-ups of Russian troops on the border with Ukraine. Other peaks correspond to January 26, which was the date of Nato’s written response to the Russians, and the start of the invasion on February 24. 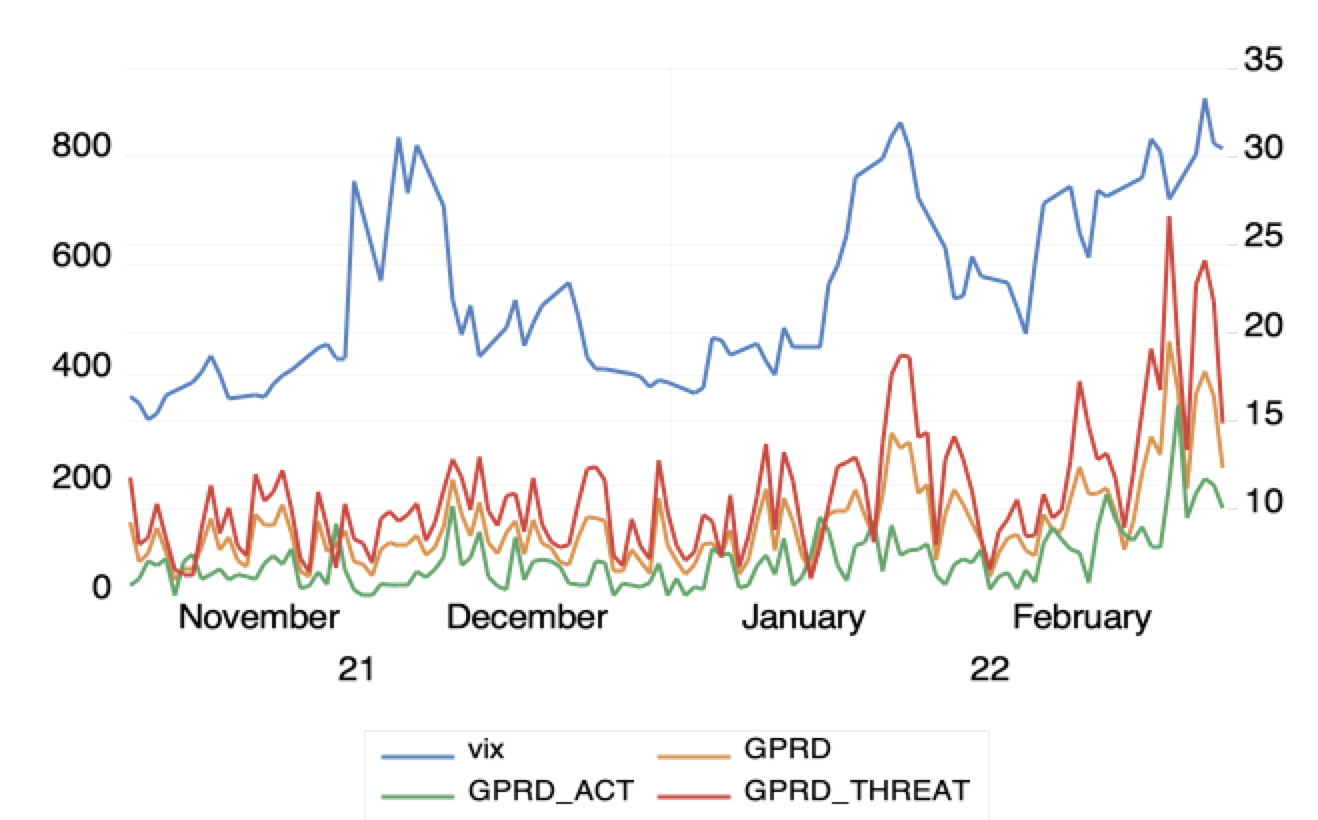 Energy markets, and oil in particular, react to geopolitical risk at the best of times. And given Russia’s huge importance as an oil exporter, energy prices have been particularly affected by this war. Brent crude is currently trading at around USD 116 per barrel, having risen over USD 130 a couple of days ago. This will impact everything from firms’ cash flows to consumer petrol prices, creating inflationary pressure that helps to bring about recessions.

Because Russia and Ukraine are also major exporters of many other important commodities such as wheat, neon gas, palladium, and sunflower oil, their prices have been soaring too – and they’re destined to keep increasing due to western sanctions. 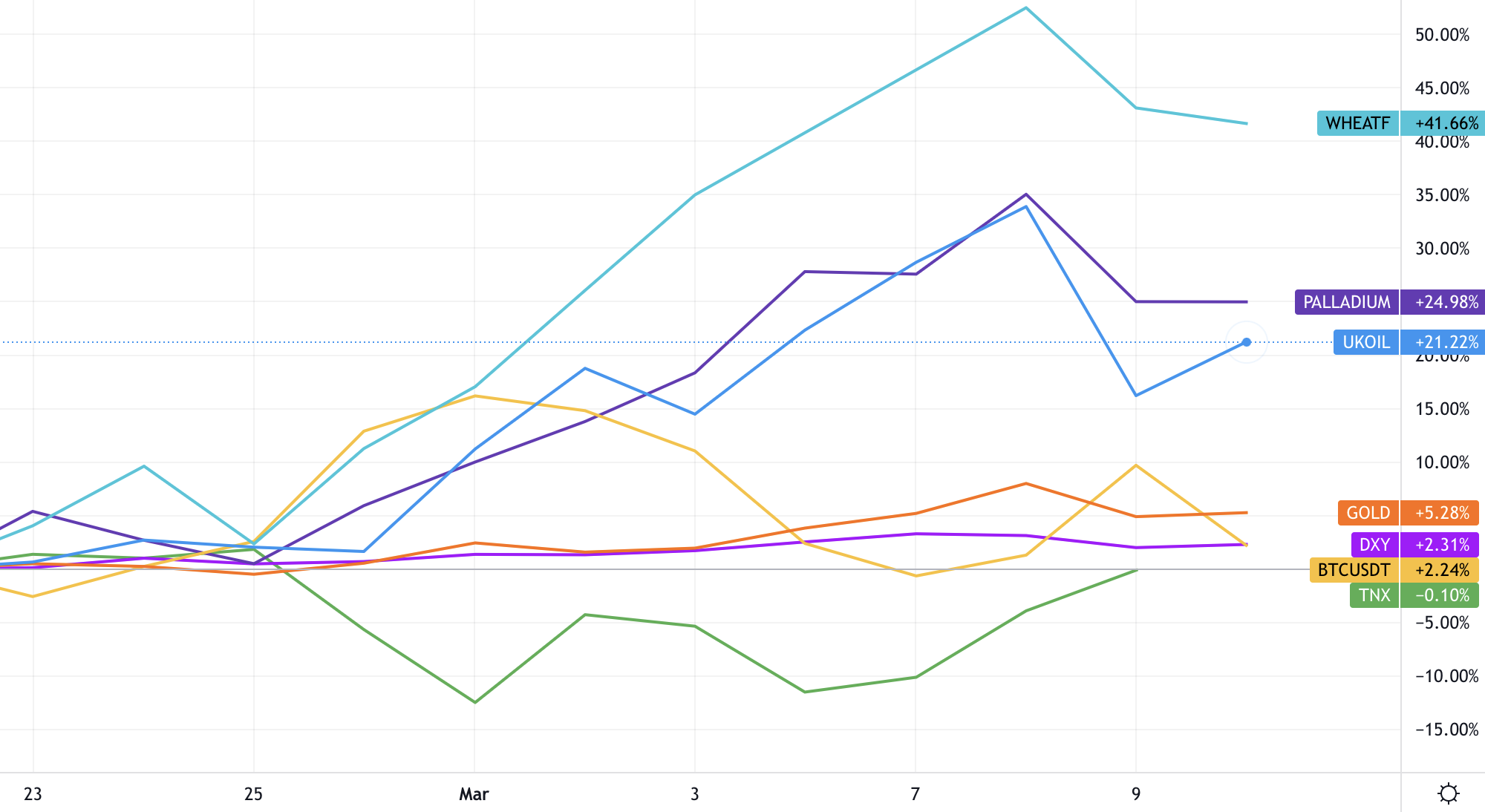 On the other hand, safe havens in times of volatility have been doing well. The price of gold is up again after its remarkable uptick in the early months of the pandemic. Bitcoin and other cryptocurrencies have the potential to benefit since they are a possible vehicle for Russians to circumvent sanctions, but they have been more subdued lately.

The response of stock markets to the war is more complex, given that different markets have more or less exposure to different commodities than others. They also have different levels of exposure to the Russian stock market (which remains closed after plunging together with the rouble following the invasion).

According to our calculations from data that dates back to 1985, European countries are more correlated to the Russian market and therefore more vulnerable. For example, France, Germany, and the UK have a 0.45, 0.42, and 0.47 correlation with Russia, where 1 would mean they moved in lockstep and 0 that they did not influence each other at all. The US, on the other hand, has an 0.26 correlation, while China’s, interestingly, is just 0.1. This all broadly corresponds to how different stork markets have performed since the invasion, as you can see below. 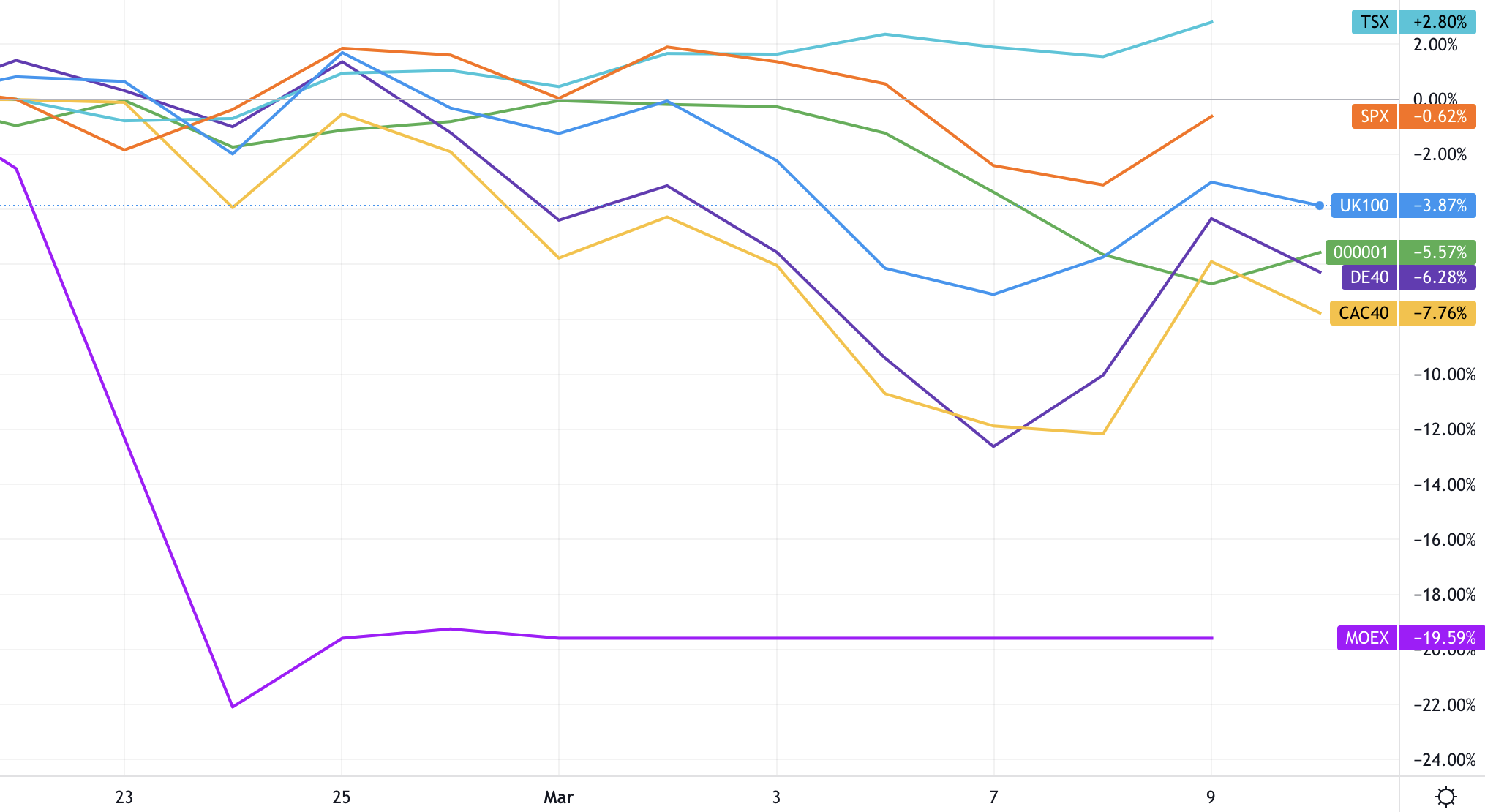 Finally, what about different types of companies? As you can see below in this breakdown of US players, different sectors have performed quite differently in the early stages of this crisis. The black line is the S&P 500, so those below have underperformed and those above have done better.

Energy companies have been doing very well, for example (as have weapons makers). Companies that either sell consumer staples or consumer products that are more discretionary, ranging from HiFi equipment to cinema tickets, have been losing out amid fears that they will have less to spend because of commodity inflation. 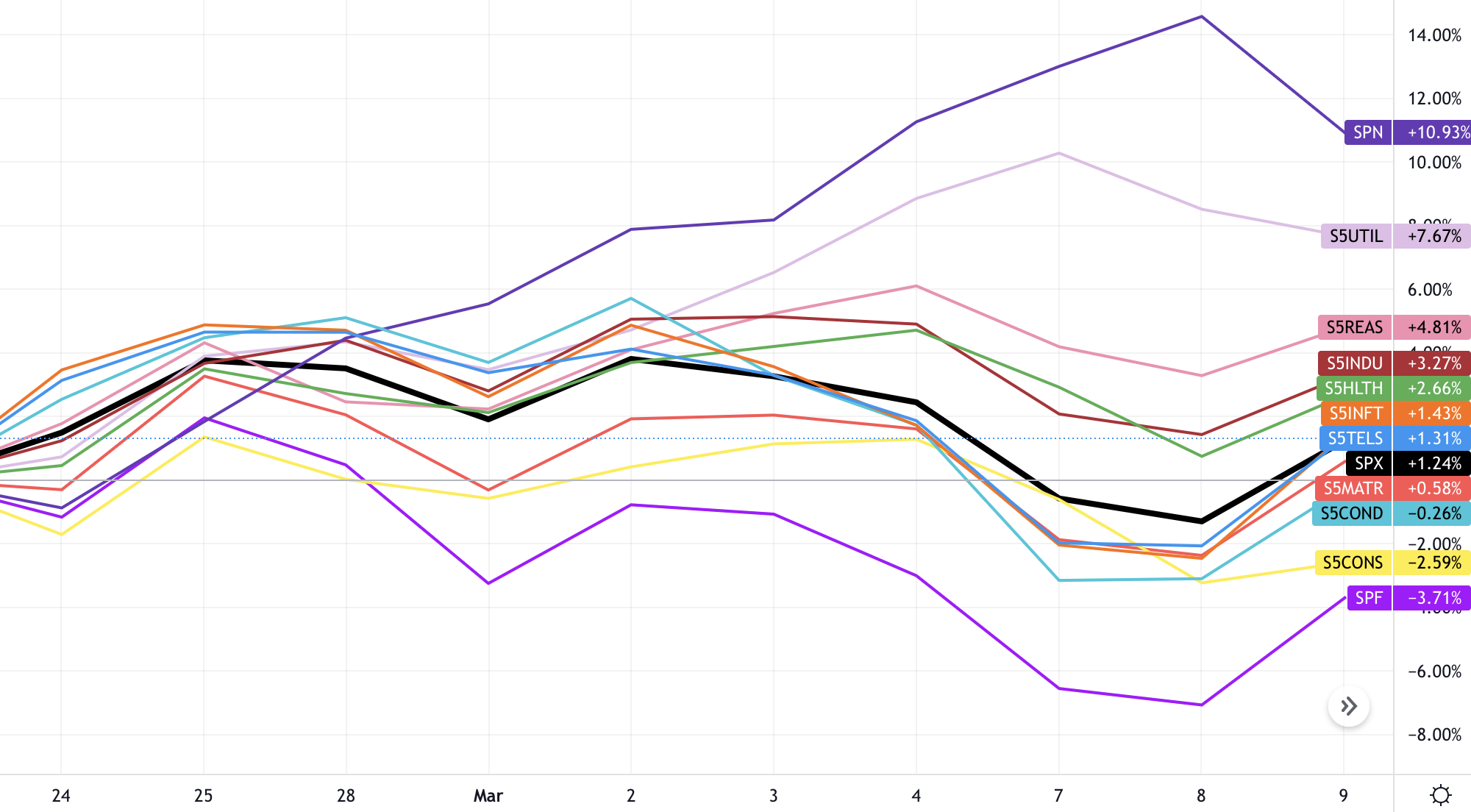 We shouldn’t be fooled into thinking that some sectors are simply going to benefit from the war, however. There can be short-run winners, but the interconnectedness of economies, the burden of sanctions and the costs of increased uncertainty will eventually bite all markets. It’s going to affect household budgets, wages and also pensions – regardless of the final outcome, which remains largely unpredictable.

This article is republished from The Conversation under a Creative Commons license. Read the original article.