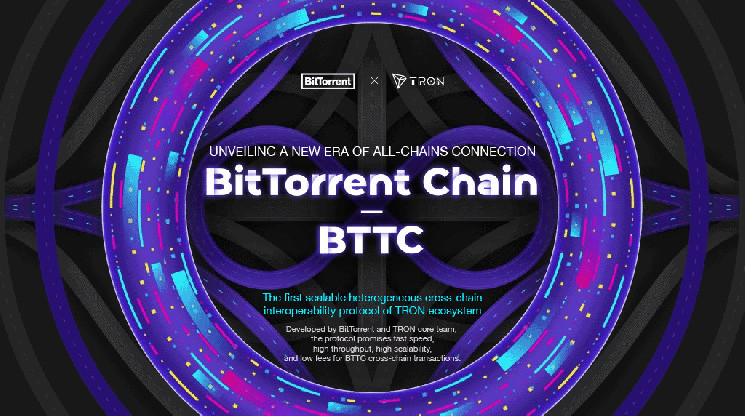 TRON, one of the world’s largest and most popular blockchain-based operating systems, and BitTorrent, the leader in peer-to-peer protocols and products, has announced the launch of BitTorrent Chain (BTTC). BTTC marks TRON and BitTorrents’ first-ever foray into the cross-chain field, heralding the advent of a whole new era!

Three years into its inception, the TRON protocol has grown into a network that handles transactions averaging over $10 billion every day and as a competitive Layer 1 blockchain protocol that exists side by side with Ethereum. Total assets on the TRON blockchain have ballooned over $50 billion, and the total value locked in TRON decentralized financial programs has surpassed $10 billion.

These achievements have boosted Justin Sun’s expectation of TRON protocol’s future development. He mentioned its new vision in a recent open letter, saying that the TRON protocol “which handles five times the daily transactions of PayPal is tipped to be the Global Settlement Layer for all.”

Meanwhile, BTTC will play an essential role introduced into the TRON protocol as a Layer 2 solution. According to Justin Sun, positioned as a global settlement layer, Layer 1 of the TRON protocol will focus on providing secure and fast settlement services at lower fees for financial institutions, crypto assets, and decentralized finance. In the meantime, the BitTorrent Chain, a Layer 2 scaling and cross-chain solution, will migrate TRON’s DeFi, NFT, DAPP, and other emerging blockchains onto Layer 2 and provide cross-chain solutions.

BTTC marks the beginning of a new era where all chains are connected. Anyone following cross-chain projects may have heard of the three cross-chain bridge attacks against Chainswap, Anyswap, and Poly Network in July and August alone, among a number of recent cyberattacks. Total losses amount to over $628 million, affecting dozens of notable projects.

The brand new cross-chain bridge BitTorrent Chain is not only a perfect security solution to such attacks, but it also addresses some of the urgent needs in this field. Allowing users to enjoy lower handling fees and faster transactions by offering higher throughput on the main chain and higher TPS. In the meantime, developers can create applications on BitTorrent Chain at a higher speed with a lower cost. Furthermore, with a more secure and transparent mechanism, BitTorrent Chain ensures complete transparency of all nodes and custody accounts and full traceability of transactions. These features altogether guarantee asset security for all users on BitTorrent Chain.

As the first heterogeneous cross-chain interoperability scaling protocol in the blockchain space, BitTorrent Chain, or BTTC, will support and be compatible with TRON, Ethereum, and Binance Smart Chain (BSC) upon its release. In other words, with the help of BitTorrent Chain, users can transfer mainstream assets among TRON, Ethereum, and BSC in a decentralized manner without any limit. Furthermore, in the near future, BitTorrent Chain will be compatible with more public chains, fulfilling the mission of connecting all chains. Thus, a new era where all chains are connected has been officially ushered in by BitTorrent Chain.

It is worth attention that BTTC will be fully compatible with the Ethereum Virtual Machine. As mentioned in the open letter of Justin Sun, TRON has invested $450 million in its DeFi strategy and will continue to commit another $1 billion to BTTC developer support and DeFi mining.

Besides, a Super Representative election of BitTorrent Chain nodes will be held on the TRON blockchain, where BTT holders will stake and vote. Anyone is welcome to this completely decentralized BTTC node election, and BTT holders can not only cast votes by staking but enjoy staking rewards from their votes. It should be noted that the election will be closed once the limit of the number of available nodes and BTT staking amount is reached. After becoming a network validator, users can earn a certain amount of BTT and participate in community governance.

To drive the growth of the TRON ecosystem, 5 billion SUN was committed in June 2021 to participants of Genesis Mining and Governance Mining and holders. SUN.io has thus been upgraded at all fronts, becoming TRON’s one-stop platform for stablecoin swap, token mining, and self-governance. Ultra-high mining rewards following the launch of the project have attracted a large number of users. For example, in less than 30 minutes after going online, 3pool LP pool saw its APY rocket to as high as 3,000%, while those of SUN-TRX LP (II) pool, SUN Stake pool, and SUN Stake & Lock pool registered surges of 9,500%, 100%, and 100% respectively. At present, the SUN-TRX LP (II) pool still boasts an APY of 72.05%, with a total staked volume of $730 million!

In the meantime, TRON Foundation has launched mining on its lending platform JustLend and liquidity mining on JustSwap, which are star projects following Genesis Mining on TRON. This not only maintains diversity in TRON’s DeFi ecosystem, continues providing DeFi mining opportunities with low entry barriers and generous returns but also meets users’ demand for a premium mining platform.

Users can earn transaction fees on top of mining rewards when they stake LP tokens to participate in JustSwap liquidity mining. At present, brand-new mining modes (phase IV) of JustLend and JustSwap are in full swing. As we advance, TRON and BitTorrent have aligned on the vision of “connecting all chains.” Moreover, BTT tokens will be at the heart of the BitTorrent Chain as a value bridge, connecting all parts to build a holistic cross-chain ecosystem with functional value circulation. Thus, as the new era of “connecting all chains” arrives, it is highly promising that BitTorrent Chain will start another new chapter.

About TRON and BitTorrent

Founded in 2004, BitTorrent is one of the largest decentralized peer-to-peer networks in the world, with almost 100 million active users driving 22% of upstream and 3% of downstream traffic globally.

TRON is dedicated to accelerating the decentralization of the internet VIA blockchain technology and decentralized applications (DaPPS). Founded in September 2017 by Justin Sun, the company has continued to deliver impressive achievements since MainNet launch in May 2018. July 2018 also marked the acquisition of BitTorrent, a pioneer in decentralized services boasting nearly 100M monthly active users. The TRON ecosystem has gained incredible traction in recent years, with over 52 million users on the blockchain and upwards of 2.3 billion transactions. In addition, TRON boasts the largest circulating supply of stable coins across the globe, overtaking USDT on Ethereum in April 2021.

Will XRP offer value to its investors in the long-run

Is Solana the Fastest Horse? Veteran Crypto Trader Shows Why SOL May Be Set to Outperform Everything

Dogecoin Is Range Bound as Buyers Attempt to Breach $0.24 Resistance