The price of bitcoin surged to US$62,000 as the market prepares for the approval of the first-ever bitcoin ETF on the New York Stock exchange this week. Bitcoin (BTC) ended the week up ~10% with the rest of the digital asset markets benefiting from the positive tailwinds the ETF news created. The second and third largest assets on the Brave New Coin market cap table, Ethereum (ETH), and Binance-Coin (BNB), ended the week up ~8%, and ~12% respectively.

It was reported on Friday last week that the Securities and Exchange Commission (SEC) is likely to approve Bitcoin ETFs proposed by ProShares and Invesco. The two ETFs are based on Futures contracts and were filed under mutual fund guidelines which SEC chairman Gary Gensler believes will offer stronger protections for investors.

ProShares filed a post-effective amended prospectus on October 15th, which stated that the group expected to launch their ETF on October 18th, although it may not be immediately available for trading. Valkyrie Funds

has filed their 8A for a futures-based Bitcoin ETF, which essentially registers a security for trading on an exchange. This ETF is also expected to launch next week.

Bloomberg Intelligence ETF Analyst James Seyffart noted on Twitter that the Bloomberg data team was in the process of adding the ProShares Bitcoin Strategy ETF to its terminal. Its ticker will be BITO and it will have a 95 basis point (0.95%) expense ratio, which will be much more attractive than the 2% on Grayscale’s GBTC product, making it instantly appealing to investors.

A Bitcoin ETF has been years in the making. Proponents argue that an ETF will make bitcoin more accessible to those who wish to invest in the asset but don’t want to deal with the actual underlying cryptocurrency itself. An ETF takes away the self custodian requirements of BTC and is regulated by major exchanges and government agencies like Nasdaq and the SEC. Investing in Bitcoin is about to feel safer, easier, and more approachable for a number of investor groups in the United States.

On Friday, the BTC volumes on Options and Futures markets surged. This is despite high premiums on these derivatives, indicating that ‘smart money’ which normally buys these products, is predicting that the price of BTC is set to rise further. Ki Young Ju, the CEO of on-chain analytics firm CryptoQuant, wrote in a blog that Bitcoin’s recent price surge isn’t happening because speculators or shorts are being “squeezed” or caught out, but because there are large-volume buyers active on derivatives platforms.

BTC is approaching its all-time high of ~$64,800. Whalemap reported on Twitter that bitcoin has broken a number of major resistance levels on its rise up to US$60,000 and that price discovery may not be far away with order books thin near the ATH price. If bitcoin pushes higher and hits price discovery mode as Whalemaps outlines, all bets are off as to where the price of the asset may land without any major orderbook resistance.

Voting for a long-awaited change to the Cosmos blockchain is set to conclude on Wednesday. Voters so far have backed the proposal. The change is set to be implemented to Terra’s Columbus mainnet and will enable Inter-Blockchain Communication (IBC) protocol for interoperability between Terra and other blockchains. The change will allow for permissionless transfers between Terra and other blockchains. The price of Terra (LUNA) is down ~17% in the last week.

The Beige Book, also known as the Summary of Commentary on Current Economic Conditions, is a report that the Federal Reserve Board releases eight times per year. It provides a snapshot of the current state of the US economy using data from the 12 fed banking districts. Macro investors remain eager to find out when the Federal Reserve will begin tapering its aggressive expansionary monetary policy strategy. Sentiment from the Beige book may provide some hints. 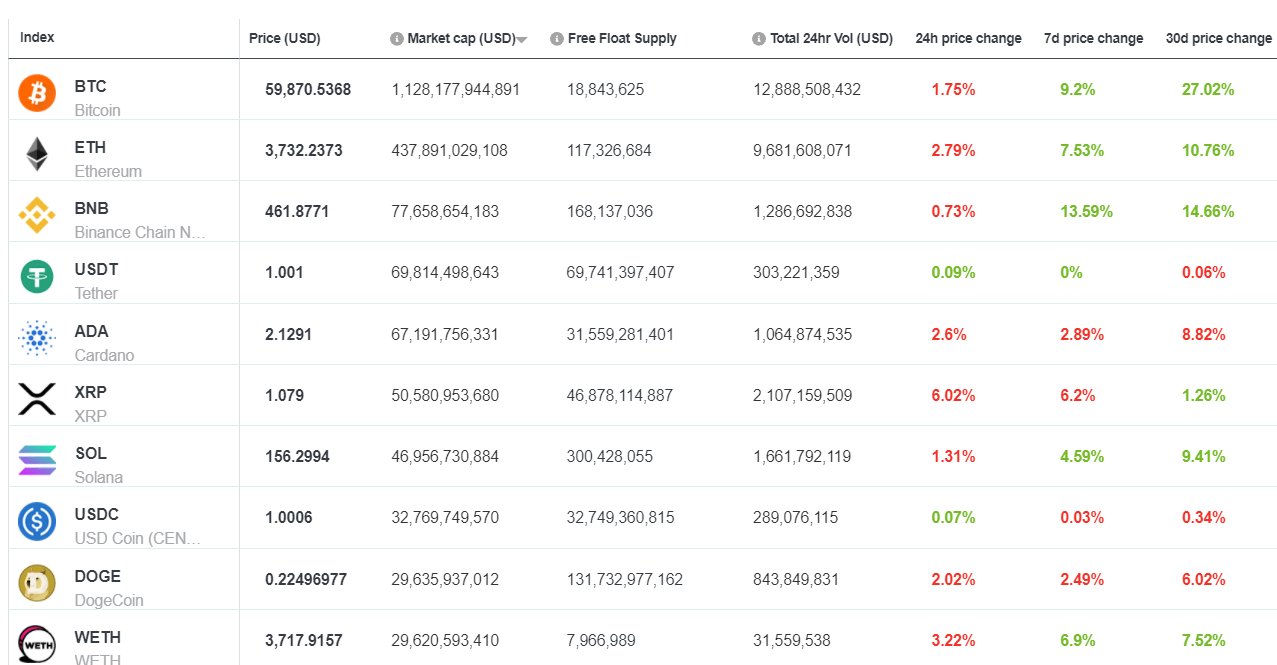 Performance in the altcoin markets was mixed with much of the limelight shifting to Bitcoin. Binance-coin (BNB) was the top-performing asset in the Brave New Coin Market Cap top 10. On October 13th, Binance announced that it is setting up a US$1 billion fund to push the growth of the Binance Smart Chain. This is one of the largest ever growth funds and is likely to accelerate the adoption and scaling of BSC. 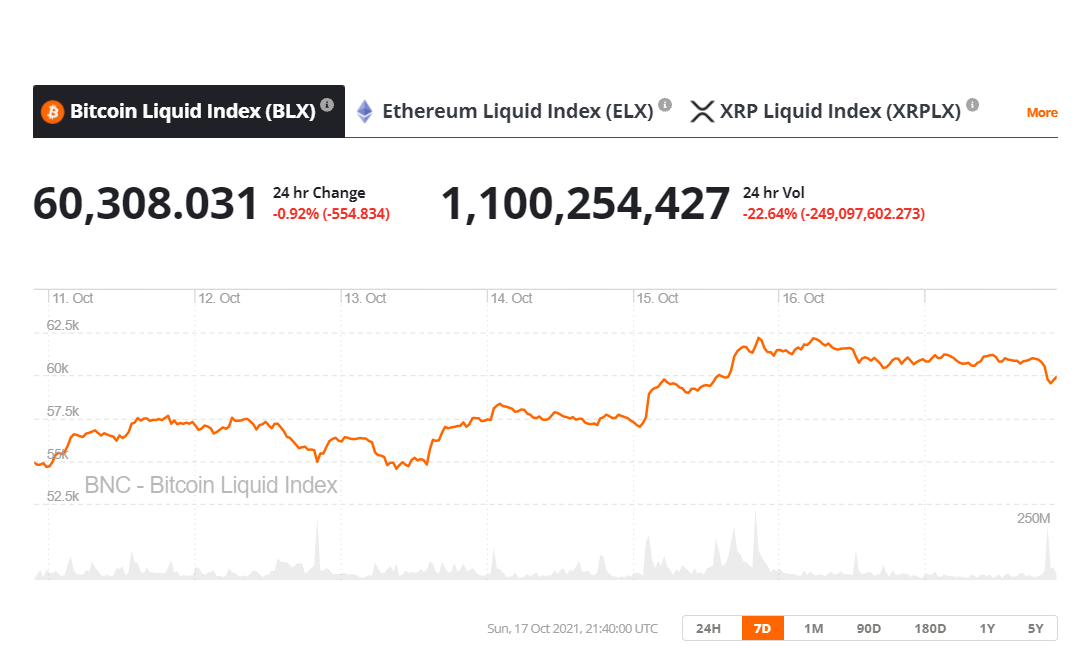 The price of Bitcoin crossed the US$60,000 price level for the first time since April as the asset continued its impressive Q4 2021 surge. Data from Glassnode shows an impressive commitment by buyers, who last bought at these price levels to hang on to their Bitcoin “throughout all the volatility, the ups, and the downs of the last 6 months.” 99.02% of all $BTC supply is now in profit and the diamond hands of the community continue to bear fruit.