The Digital asset markets have switched to bullish as we begin the fourth quarter of 2021. The largest and oldest crypto Bitcoin (BTC) ended the week up a healthy ~13%. The second and third largest assets on the Brave New Coin market cap table, Ethereum (ETH), and Binance Coin (BNB), also enjoyed a week of double-digit gains and are up ~14%, and ~24%, respectively.

The sudden bullishness in the crypto markets appeared to be triggered by a statement by the U.S. Federal Reserve Chairman Jerome Powell. Powell said he has “no intention” to ban Bitcoin and cryptocurrencies during a 2-hour long financial services committee meeting on Thursday.

During the meeting, Powell was asked by known blockchain proponent Rep. Ted Budd (R-N.C.) to clarify statements he made in a July hearing. Four months ago, Powell said the development of a U.S. Central Bank Digital Currency would undercut the need for stablecoins and private currencies, such as Bitcoin. Budd asked whether statements implied he was seeking to ban or limit the use of cryptocurrencies, “like we’re seeing in China.”

Powell responded by saying he had misspoken earlier in the year and that he had “no intention to ban them.” However, he clarified his position on stablecoins, comparing the utility they offer to be similar to money market funds or bank deposits. “They’re to some extent outside the regulatory perimeter, and it’s appropriate that they be regulated. Same activity, same regulation,” Powell said.

Powell’s comments to Budd and the Senate banking committee have been interpreted favorably by the market. Powell does not intend to take a draconian approach to Bitcoin and crypto regulation, reassuring investors that it is safe to reenter the digital asset markets.

Earlier in the week, Gary Gensler, chairman of the Securities and Exchange Commission (SEC), indicated that he is open to exchange-traded funds (ETFs) for Bitcoin futures. Speaking at the Future of Asset Management North America Conference on Wednesday, Gensler said he looked forward to his staff reviewing a “number of open-end mutual funds launched that invested in Chicago Mercantile Exchange (CME)-traded Bitcoin BTC. Short squeezes occur when short traders are forced to close their positions (at a loss) due to a sudden price increase. These traders are forced to cover these positions quickly before the price goes even higher. If enough shorters are caught in this position, then the subsequent squeeze can have a tangible effect on price.

Rocket Pool is a base layer protocol for staking in ETH2, that aims to align the incentives of Ethereum 2.0 stakers who wish to run nodes and delegate stake, and those who wish to delegate stake only. It offers products for both delegators and node operators. Its Dapp is set to expand the options available for interacting with ETH 2.0. So far 7,817,146 ETH has been staked to Ethereum 2.0 or ~US$27 billion.

On Thursday the Hedera Hashgraph network will launch v.0.18.0 of its mainnet. The update will ship new changes such as a new ability to associate Hedera addresses to NFTs and a new feature to support granular performance testing in development environments. The price of the network’s native token, HBAR, which powers decentralized applications on Hedera, has risen by ~14% in the last week. 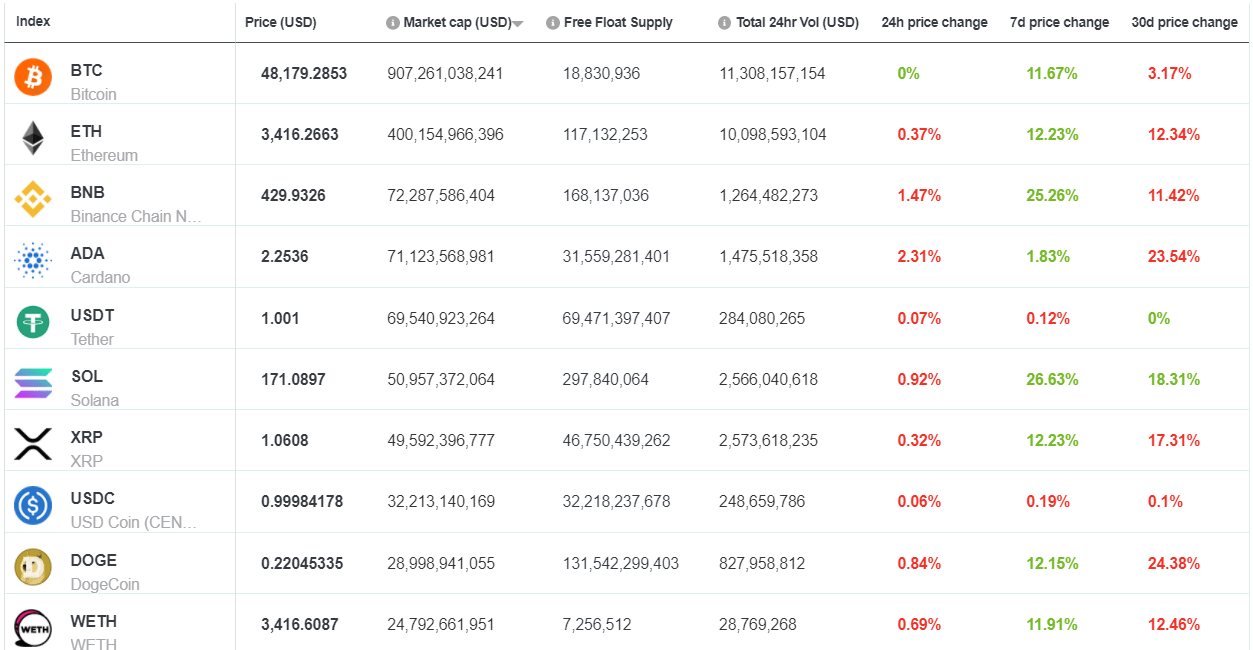 It was a strong week for assets in the Brave New Coin market cap top 10 with strong gains across the board. Platform blockchain Solana overtook XRP to become the 6th largest asset in crypto. On Saturday, an NFT from the 5,000 piece SolanaMonkeyBusiness NFT collection sold for 13,027 SOL or ~US$2.26 million, making it the most expensive NFT ever sold on Solana. The Solana NFT and DeFi ecosystem continue to gain ground against Ethereum with the chain offering cheaper, faster transactions. 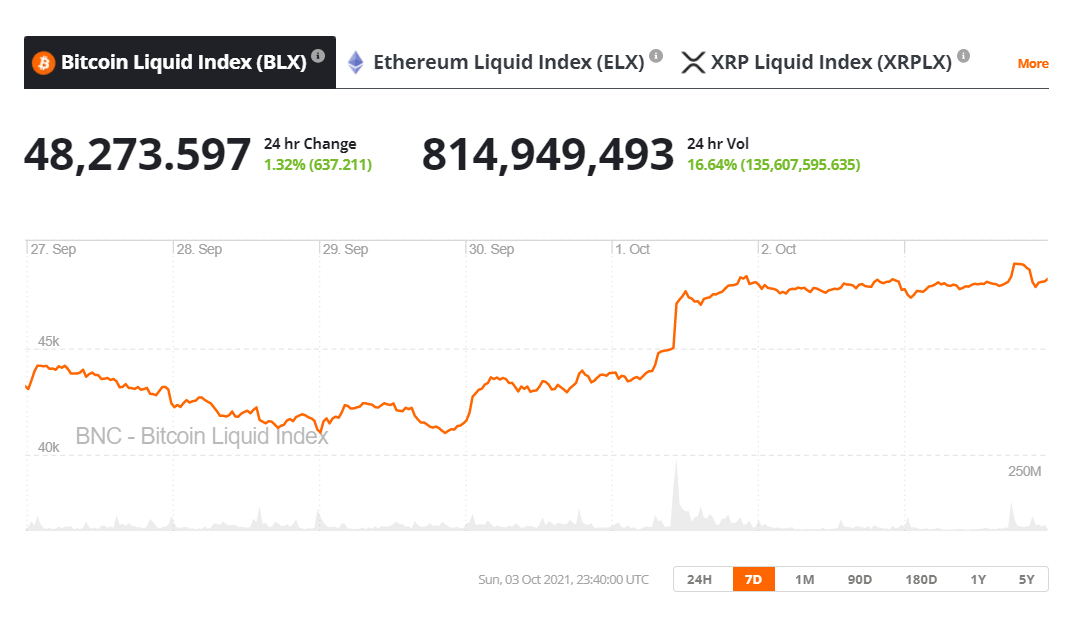 and has just hit a new 3-month high. This is impressive as it has been only a few months since a number of Chinese provinces banned Bitcoin mining, and major mining companies like Bitmain and Sparkpool made an exit out of the country. Bitcoin fundamentals have survived and thrived following the near-complete ecosystem exit of the largest mining contributor in the world. This indicates the underlying strength of the network.

Can DOGE Investors Break Sellers At $0.72?

Has US inflation peaked? 5 things to know in Bitcoin this week