Home Articles what to expect from cryptocurrency next?

Relevance up to 10:00 2022-07-28 UTC+2 Company does not offer investment advice and the analysis performed does not guarantee results. The market analysis posted here is meant to increase your awareness, but not to give instructions to make a trade.

Over the past two years, Bitcoin has shown its dependence on Fed's decisions. The volatility of the asset has steadily increased as the regulator's meeting approached. Despite this, the current situation is different, and Bitcoin managed to hold above $22,000 in the run-up to the Fed meeting. This points to the gradual formation of a strong bullish trend, which could later trigger a recovery of the cryptocurrency. However, what is the main driving force behind the emerging trend, and what is driving buying activity?

Glassnode experts believe that there is the gradual formation of a local bottom. The market has passed the stage of capitulation, due to which there are large free volumes of BTC coins. As of July 27, the market is accumulating volumes. Investors begin to absorb available volumes at favorable prices. Most likely, the buying peak was passed in the middle of July, when buyers were purchasing up to 3.5% of all BTCs available in circulation. Due to this phase, Bitcoin managed to reach a swing high of $24,000. 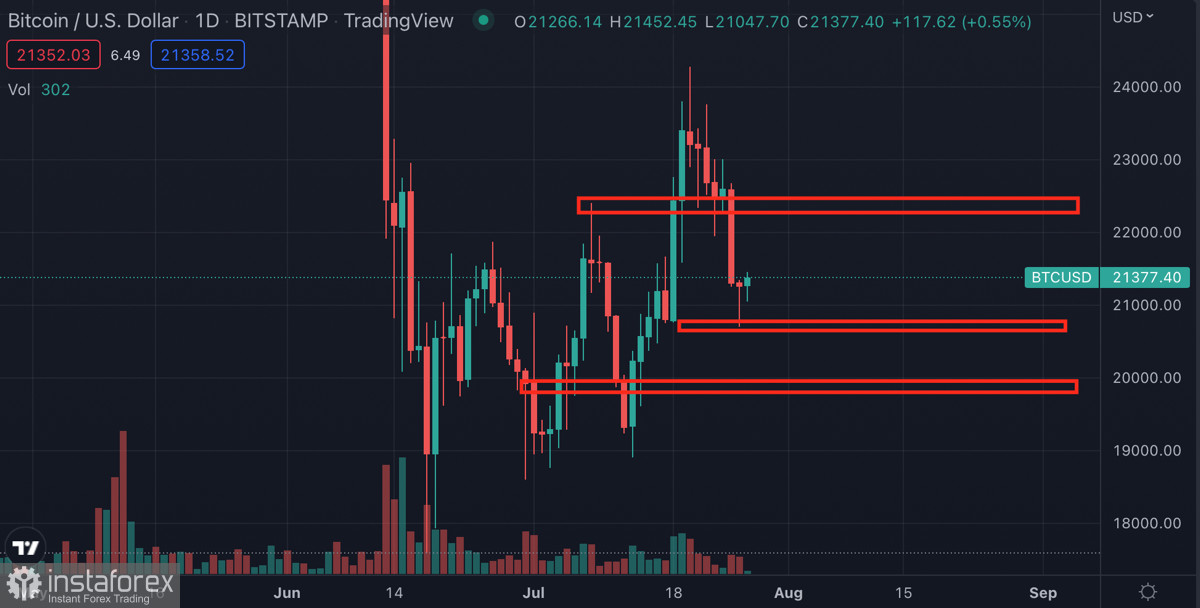 The period of active accumulation allowed BTC to form several important support areas. The main boundaries are located at the levels of $20,000, $20,600, and $22,400. They are necessary for the successful restraining of sellers' activity and gradual transition to the next stage of BTC/USD quotations recovery and formation of the local bottom. This stage implies a local bull rally to gradually knock out short-term investors, and the transition of BTC coins into the hands of long-term investors with low sensitivity to market changes. As of July 27, the market is on the eve of this stage of recovery and the formation of a local bottom. 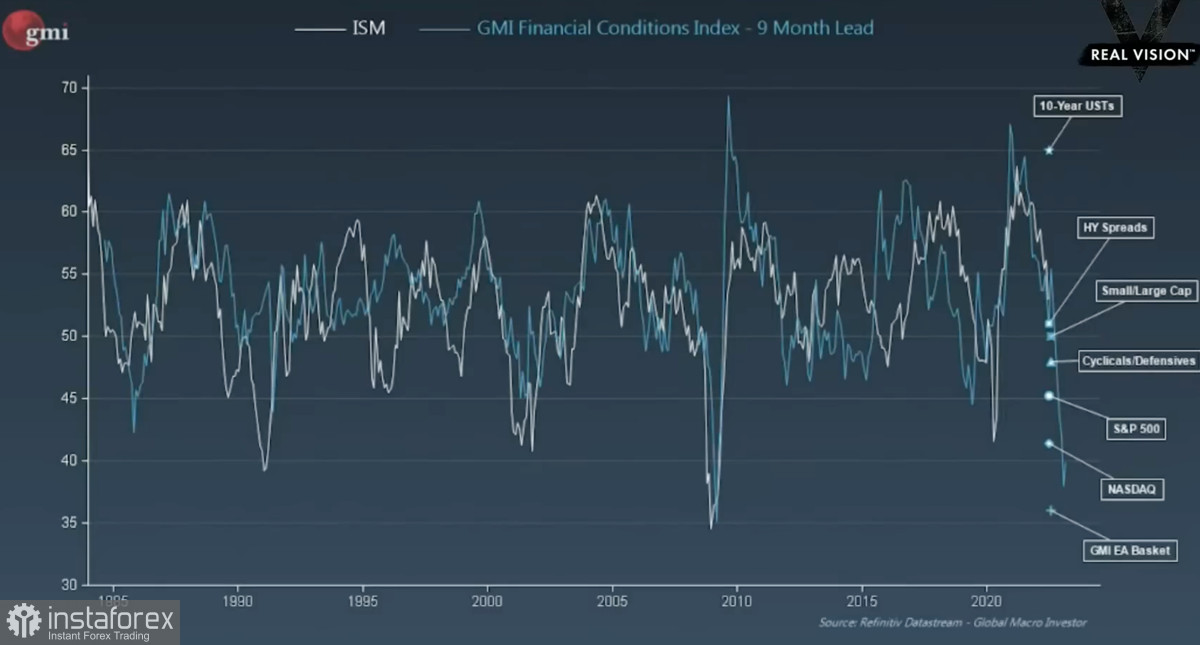 Another key factor that points to the beginning of the cryptocurrency's recovery period is the gradual increase in liquidity in the markets. Macro investor Raoul Pal believes Bitcoin is much more dependent on the overall level of liquidity than on the cyclicality of the halving process. The correlation of swing lows coincides with liquidity lows. As of July 27, markets have adapted to the new conditions, which has increased liquidity volumes. During the same period, Bitcoin began to show the first upward impulses, which proves the presence of correlation. 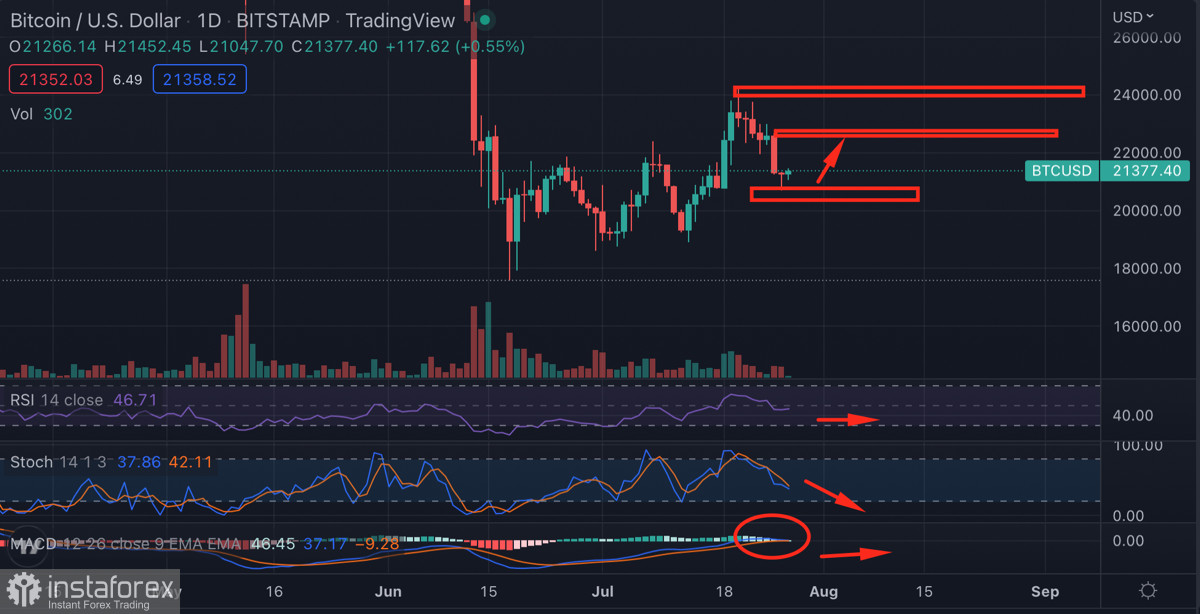 On July 26, Bitcoin was declining to the support level of $20,600 but managed to hold above it in the end. The downside potential is gradually exhausted, and judging by the positive movement of stock indices, the Fed meeting will not change the situation drastically. Despite these technical metrics, the asset does not show a unified direction. The stochastic oscillator continues a bearish crossover and is declining. At the same time, the RSI indicates a growing volume of purchases, while the MACD maintains a flat trend in the green zone. These factors indicate that investors have taken a wait-and-see attitude and are in no hurry to benefit from bullish impulses until the results of the Fed meeting and the US GDP report for the second quarter of 2022. 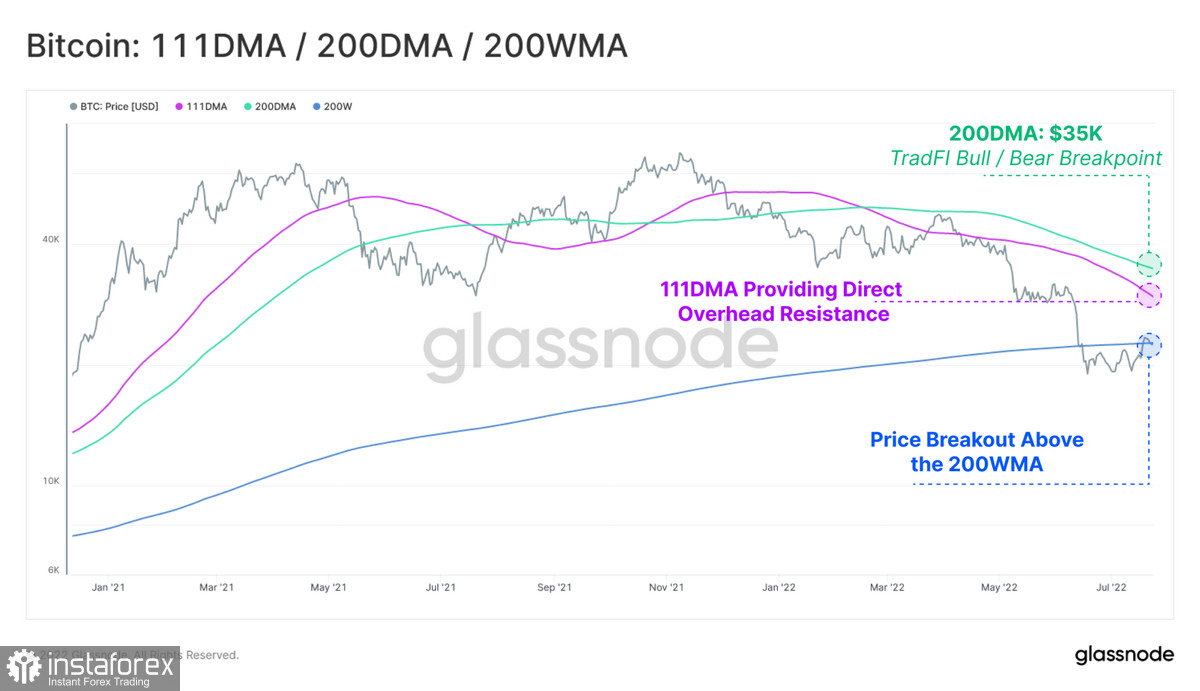 Given the growing interest in company stocks and BTC's increased correlation with leading stock indices, we should not expect another wave of capitulations. The Bitcoin market is close to the stage of protracted growth to push away short-term investors from the market. The ultimate target for a local bullish move is between the 111DMA, 200DMA, and 200WMA, in the area of $30,000-$35,000. Most likely, this range will be the main target for Bitcoin in August.