Home Articles Where Are Bitcoin and Crude Oil Heading?

Based on the latest updates we are assessing European banks exposure, crude oil analysis and an outlook for bitcoin and cryptocurrencies. Russia launched a full military operation in Ukraine in the early hours of Thursday morning, sending Bitcoin lower.

Russian troops crossed the Ukrainian borders from multiple directions in what appears to be a full-scale invasion. Poland, Estonia, Latvia and Lithuania invoked NATO Article Four.

Since 1949 Article Four was only triggered 6 times. If a NATO member has security concerns it may invoke Article 4 for consultation within the North Atlantic Council.

Explosions are heard in multiple cities in Ukraine including Kyiv, Mariupol, Odesa and Kahrkiv. President Putin will strive to win the war by Sunday. The US and EU are preparing new sanctions on Russia.

Russia banks are well-prepared for economic sanctions. The US warned earlier this week that Sberbank and VTB will face sanctions in an event of a military invasion. Both Sberbank and VTB were not included in the UK sanctions as sanctioning these financial institutions may have repercussions.

The European Central Bank (ECB) asked European banks to report their exposure to Russia and whether they are able to contain the risks. Stress tests were conducted in the past by the ECB to ensure financial stability in an event of a crisis.

Some of the European banks that maintain high exposure to Russia are Unicredit, Societe Generale and Raiffeisen Bank.

The news of Russia attacking Ukraine are likely to affect central banks’ monetary policies. Rather than monetary policy tightening, the ECB may be forced to reconsider its plans for 2022.

The Fed and ECB May Revise Their Monetary Policies

Despite the fact US banks have limited exposure to Russia, the risk aversion that is gripping the markets may alter the Fed’s intentions to hike rates in March 2022. A sudden shit towards ultra loose policy including Quantitative Easing (QE) measures may affect multiple markets including Forex, Stocks, Futures, Bonds and even cryptocurrencies.

QE measures may reflect in greater volatility in the FX markets. Central banks may aim to cool the markets with various measures as was done some time ago. Credit rating agencies such as Fitch and Moody’s may shortly make headlines. The volatility may be seen in USD currency pairs.

The upcoming sanctions are expected to be ‘the harshest package of sanctions’ the EU has ever implemented. The new EU sanctions are scheduled to be announced at Thursday’s evening emergency summit. The EU is expected to prevent Russian banks from accessing European financial markets.

One of these possible actions it to deny Russian banks with access to SWIFT. The reaction such sanctions may be devastating and may follow credit rating downgrades. Some reports suggest the EU is considering direct sanctions on Vladimir Putin.

“In connection with the current situation in the financial market and in order to ensure the protection of the rights and legitimate interests of investors in the financial markets, reduce risks and limit excessive volatility, the Bank of Russia ordered brokers to suspend short sales on the exchange and over-the-counter markets from February 24, 2022 at 11:00am Moscow time and until the cancellation of these regulations.”

Crude oil posted marginal gains in the energy markets, trading over $100 a barrel. Tapping the strategic reserves may only limit crude oil rally if coordinated action is taken.

Despite crude oil’s recent rally, a coordinated action may trigger swift and significant weakness in both WTI and Brent. Gold benefited from safe-haven flows as we often see during a global crisis.

Central banks that increase their gold reserves may consider selling some of the reserves, particularly the central bank of Russia. The central bank already announced it is intervening in the forex market to limit the Russians Ruble sell-off.

From a technical angle, 105.80 acts as the nearest resistance (weekly chart).

Bitcoin and the leading cryptocurrencies were hit when the news of Russia invading Ukraine broke. Grayscale Bitcoin Trust (BTC) is widely expected to be knocked lower following the crisis.

Bitcoin mining may have a direct impact on the BTCUSD. 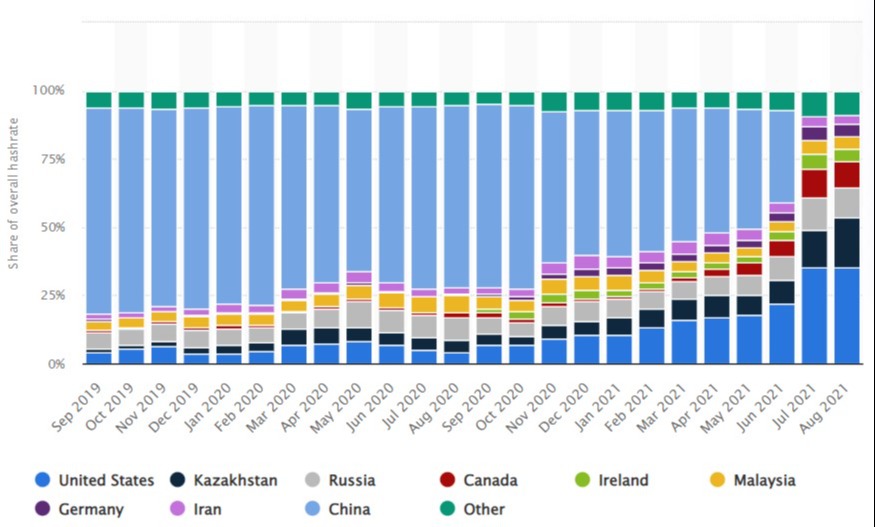 Russia is currently the world’s third largest bitcoin mining hub. Approximately 11% of bitcoin mining takes place in Russia, the United States is in the first place with 35% (approx.) according to statista.

The fact Russia is among the biggest bitcoin mining countries, any tension in the region may have a negative influence on the cryptocurrency. When the invasion was announced, BTC dropped by +10% (approx.), sinking the rest of the leading cryptocurrencies with it.

It is interesting to observe that some altcoins as well as tokens that were built on BNB (Finance Smart Chain) blockchain or ETH for example were unaffected. It may suggest that a significant portion of the most liquid cryptocurrencies are traded via algorithms.

Although the Transactions per Second (TPS) is limited in bitcoin when compared to Solana for example, it has been estimated that between 70% – 80% of crypto trading volume is due to bots. We assume that arbitrage bots are responsible for the plunge in today’s session. 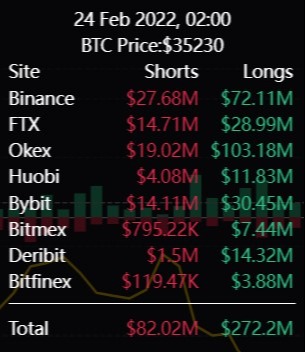 Buying the dip following the tension between Russia and Ukraine may appeal to some investors. Buying on dips is a known trading strategy. The main concern under the current circumstances are mass BTC liquidations from Russian and Ukrainian investors.

In 2021 it was reported the Ukraine official hold approximately $2.6 billion in cryptocurrencies. The public may hold a greater amount. As restrictions are placed on ATM withdrawals and uncertainty on the future of Ukraine, mass liquidations may sustain the selling pressure on bitcoin. 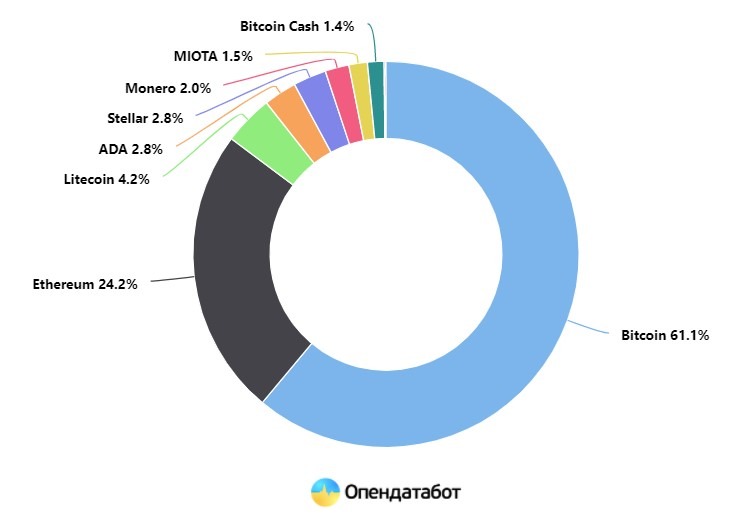 Increased sanctions on Russia may also trigger mass liquidation in Russia. Liquidations may be carried in black markets such as Hydra, a well-known market place in the dark net. Users can liquidate bitcoins in exchange for physical cash.

As a result, the crypto fundamentals are not playing a role, as strong as they may be. Cardano (ADA) is a good example of it. Despite the rise in transactions Cardano is trading well below 80 cents, in tandem with the broad weakness in the top cryptocurrencies.

There were early indications that Solana (SOL) was mildly bearish, discussed in our prior analysis of the cryptocurrency.

The selling may only bottom once clarity is provided on the upcoming sanctions and the outcome of the invasion.

Russia may attempt using stablecoins to bypass the sanctions. Stablecoins such as USDT (Tether) or USDC (USD Coin) are very popular. Paying attention to these stablecoins trading volumes, inflows and outflows (mainly Tether) may provide some guidance.

Russia’s central bank is developing its own cryptocurrency, however, the testing is only in phase one. The odds of the Russian digital ruble going live within the next several days or weeks are very low.

Based on the above, it may take more time for the bitcoin selling to end, which is dragging other cryptocurrencies lower. The fundamentals of the cryptocurrencies appear to be irrelevant at this stage. Crude oil (Brent) reached its weekly resistance. If a coordinated action is made to tap the strategic reserves, some retracement may be seen.