Home Articles Which Companies Will Rule the Metaverse?

Patents are being filed in relation to metaverse innovations. And the usual suspects have turned up to boss everyone else around again.

Just when we thought Web3 would save us from total domination AGAIN from big tech, it seems that they are fighting back to control the next incarnation of the internet.

A recent study by patent data analytics company IFI Claims and IALE Tecnología has thrown to light which company is patenting what innovation. Such innovations and inventions will presumably run the future metaverse.

Contents hide
1 Metaverse Colonization by Big Tech
2 Top 10 companies holding metaverse-related patents over the past five years:
3 Microsoft
4 Patents and What They are Protecting

The colonization of the metaverse has begun. Says IFI Claims, “The metaverse is a proposed integrated network of 3D virtual reality worlds, an immersive space that is anticipated to become the next big era of the internet. Why is this important? Because it opens up avenues for expansion of social media, commerce, entertainment, and a range of industries and experiences in a whole new way.”

Mike Baycroft is the CEO of IFI Claims. “Patents are one of the best predictors of the frontrunners in any race for new technologies.”

The report says that metaverse innovation is increasing. “Over the past five years, patent applications and grants containing metaverse-related concepts have been mounting as companies vie to take their places on this new stage. Patent applications include everything from hardware and software designed to represent real items in a virtual world to 3D projections without use of goggles to recognizing human behavior.”

There’s even a patent for shoes: Nike’s CryptoKick sneakers use blockchain to connect the IRL shoe to the digital representation of the shoe in the metaverse (worn by the owner’s digital twin).

Enric Escorsa is the CEO of IALE Tecnología. “Our analysis has found that over the past five years, metaverse-related patent applications have doubled to more than 2,000 across 842 companies, research centers, universities and individual applicants, spanning hardware and software in a range of technologies.” 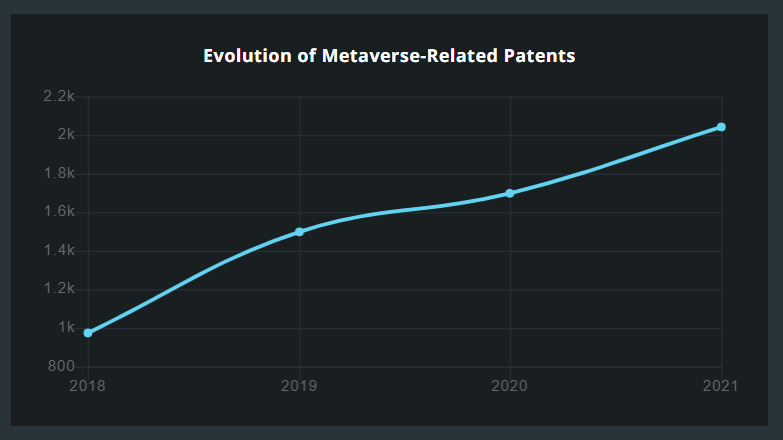 Top 10 companies holding metaverse-related patents over the past five years:

The only rather unknown entity in there is Magic Leap Inc. No, I haven’t heard of them either. 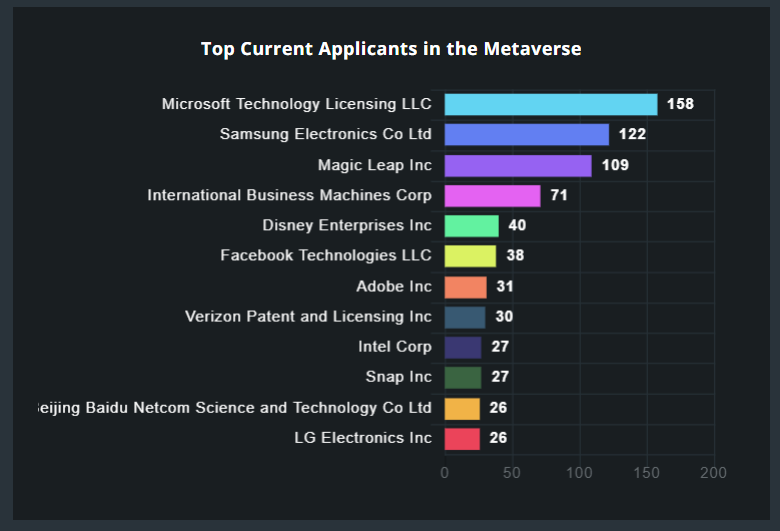 According to the report, in the last 5 years, Microsoft has made the biggest attempt to dominate the metaverse via patents. Their deal is Al that specializes in holographic
augmentation, human memory, virtual assistants in augmented reality, plus a whole slew of other things.

According to the report, Microsoft has made no secret of its intentions to plough forth into metaverse tech. they announced their acquisition of Activision Blizzard earlier this year. Activision Blizzard make immersive interactive games like Call of Duty, which is the best-selling game franchise ever. They dropped an estimated $70 billion with the purchase. Microsoft said they wanted to get on those “building blocks for the metaverse.”

Patents and What They are Protecting

Cryptocurrency also plays a big part in the metaverse innovation landscape and economy.

How high can the X-wave rally?