Home Articles XRP Struggles At $1.1 As The SEC Denies Ripple To Documents In Lawsuit

Ripple is dancing around $1 after plunging from a September high of $1.4 and testing support at $0.92. The international money transfer token has not made significant progress since regaining ground above $1. A barrier at $1.14 proves an uphill battle to the bulls, who seem to have resorted to playing defense at $1.1.

Ripple price did not bottom following the drop to $0.92. Hence, bulls lack the momentum to take on the hurdles at $1.14 and $1.2, respectively. The general technical picture enhances the bearish outlook in the market, implying that XRP could correct further before a formidable recovery comes into the picture.

The Moving Average Convergence Divergence (MACD) indicator displays a bearish signal on the daily chart. The call to sell XRP first appeared on August 24 and was later reinforced on September 6. With the MACD moving into the negative region, Ripple is bound to explore lower levels at $1 and toward $0.92.

Meanwhile, all is not lost for the bulls when the 50-day Simple Moving Average (SMA) is considered. This moving average played a crucial role in halting the declines last week, allowing buyers to retake control. If it remains in place and unbroken, Ripple will have the chance to fight for gains back to $1.4 without having to drop to $0.92 first. 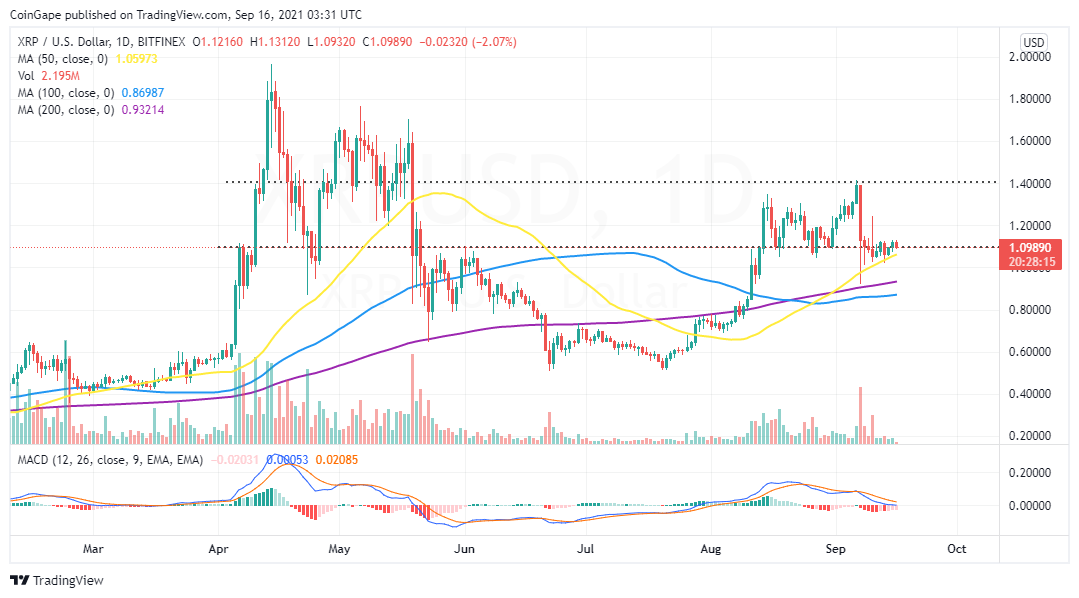 The SEC Deals Ripple A Blow In The Lawsuit

A lawsuit seeking to categorize XRP as a security token continues to drag on in the US courts. Ripple is currently requesting access to internal documents from the Securities and Exchange Commission (SEC) to develop a wholesome defense.

However, in a letter to Judge Sarah Netburn, the SEC claims that all the documents are privileged and protected by the deliberative process privilege (DPP). The letter states in detail:

“Many [documents] are also protected by the attorney-client privilege and the work product doctrine. The compelled release of the SEC’s predecisional deliberations relating to digital assets would discourage meaningful deliberation among SEC officials and staff relating to investigations, potential cases, and other regulatory activities taken or under consideration in a field where regulation carries significant consequences for the financial markets.”

“The Court should not pierce the SEC’s DPP and other privileges, particularly when the documents are irrelevant to Defendants’ proffered defense,” the agency continued, adding that “piercing the government’s privilege as a litigant over materials prepared in advance of litigation would be extraordinary and inappropriate.”

With the SEC taking a stand against supplying privileged documents, Ripple will likely file a motion to oppose the regulator’s letter on September 28. Nonetheless, Judge Netburn is expected to conduct an in-camera review of the SEC’s internal documents while considering the defendants and the plaintiff’s arguments on the DPP.

Cartesi Has a New Wrapped Token on Avalanche